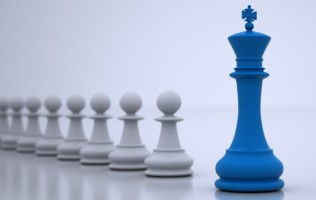 October 4, 2015 – Finding your company’s next generation of leaders is becoming an increasingly challenging and complex proposition. According to a number of studies we have conducted at Hunt Scanlon Media, transformational leaders – change agents who can realign, reorient and overhaul a company’s mission and culture – are now the most in-demand wedge of any professional group.

Why these ‘high potentials’ are gaining in influence is clear: they give every company they join a distinct competitive advantage because they think differently than everyone else. I think the intense focus on ferreting them out speaks volumes about the importance companies are placing on stepped-up talent strategies and leadership planning. But there’s a problem: demand is up, and the supply lines remain awfully tight.

“As top corporate HR chiefs focus more on business strategy, they are reassessing their competitive landscape,” Jason Hanold told me recently. “And they are looking at the intrinsic value that high impact leaders bring to their organizations.”

Jason is CEO and managing director of Hanold Associates, a specialist in HR officer assignments based in Chicago. If anyone knows the value that high impact leaders offer up, he does. I’ve known Jason for more than a decade and during that time he has built a recruiting business known for having the speed, agility and adaptability of a boutique search firm, but with the relationships and reach of his major multinational rivals.

For many of these organizations, Jason has recruited CHROs and talent acquisition heads – and a number of them were the very change agents these businesses needed to take their human capital strategies to new levels.

Jason leverages his in-depth knowledge of leadership traits and competencies to advise clients in assembling high-performing leadership teams. Prior to founding his firm, he was managing director with Russell Reynolds Associates where he led the firm’s HR officers practice. Before that, he led the global talent acquisition function for Whirlpool Corporation. He trained at McKinsey & Company, where he was director of recruiting, and was, for a time, Americas director of leadership recruiting at Deloitte.

“Distinctive talent is attracted to organizations for reasons beyond the basic elements of compensation, location, their boss, and organizational culture,” Jason told me in a recent interview session on the future of talent acquisition management. “While these are still important, outstanding talent is much more interested in the opportunity to make a significant impact, problem-solve within a complex system and to shape an organization and its’ culture.” Top talent, he said, is most attracted to organizations enduring transformation.

“Fewer people admit to desiring to drive the status quo or maintenance roles; they desire to be a driver of change,” said Jason. High-performers, he believes, are the most critical component of a successful corporate transformation, yet in his discussions with top HR professionals the largest single regret that company executives in failed transformations hold is that they didn’t move faster to bring in high-performers and move out those who were under-performing or resistant to change.

The majority of transformations fail, Jason told me. “And they largely fail due to inactive support from senior leaders, insufficient coalition building at all levels in an organization, and inconsistent messaging.”

Successful transformations focus more on the people than the change project and initiatives, he said. Distinctive talent is attracted to the opportunity, he added, because these people possess a high degree of tolerance for ambiguity and understand the need to bring others along while building coalitions. “They can frame and communicate simplicity in complex scenarios,” he said. “Therefore, organizations undergoing transformation create the ideal scenario for the very high-performing talent they hope to attract.”

Transformations need two things for success: buy-in from team members at all levels of the organization, and leaders who are comfortable moving away from the status quo and who are willing to embrace new ideas. “The entrepreneurial leader is the most willing to reject the status quo,” he said, “because they don’t believe ‘the way things are done’ is a good excuse.”

Interestingly, millennial top talent and high potentials are increasingly attracted by organizations that encourage their employees to embrace an ownership mentality and business scenarios that are compelling and entrepreneurial in nature.

“Millennial leaders are driven by empathy and a need for purpose and collaboration,” Jason told me. “Millennial leaders have a preference for the ‘startup culture’ and attraction toward small, high-growth companies over established brands, he said.

But large, established companies going through a transformation might also have a ‘start-up’ culture in terms of characteristics for navigation and opportunities for impact. “What’s compelling about these high-growth opportunities is that they allow millennials to contribute early and often and forge an ownership mentality,” Jason said.

Interestingly, if the idea of a transformation is framed well, he said it attracts exactly the sort of leaders and executives that are required for the success of the initiative. “These types of leaders most enjoy problem-solving and critical thinking. The more complex an issue, transformation, or ‘fix’ is, the more they lean in toward these business scenarios.”

In the end, companies must articulate a compelling purpose, and have a culture of flexibility and autonomy that fosters an ownership mentality at all levels. “It must embrace innovation and creative, participatory solutions to complex business problems and articulate the vision to employees,” Jason told me.

Increasingly, millennial top talent cares about impact as much, if not more, than they care about the bottom line. “So, attract around the vision of the leadership team and mission and purpose of the company,” said Jason. One example he put up: Some Stanford graduates who have been known to accept lower salaries often pursue opportunities to contribute to social causes or organizational visions that are meaningful to them.

“Hiring managers at all levels need to spend time thinking about why they joined their company, and most importantly, why they stay with their company,” he said. “Be prepared to authentically and transparently communicate how you derive meaning and purpose from your profession and company. Understand the motivators and drivers of the top-talent you seek to attract” – he said they will vary by the person.

As the hiring manager, take time to build a relationship with a candidate. People can not trust those whom they do not know, said Jason, so be sure candidates get to know you while you get to know them. “This foundation for trust will open the gates of communication, enabling an understanding of their needs, which a manager can then translate into, and align toward, the opportunities within their company and the role.”

Check Out These Related CHRO Articles: