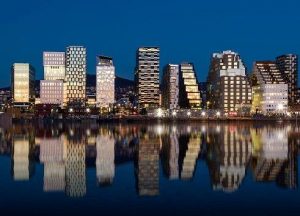 January 27, 2017 – Norwegian executive search firm Delphi Consulting AS has joined Amrop‘s global partnership of recruiting firms. The inclusion adds significant presence for Amrop in Norway, and strengthens its capabilities across the Nordics region.The organization currently has 75 offices in 53 countries throughout Asia, EMEA, and the Americas.

Led by Arne Gunnar Dokken as managing partner, Delphi Consulting is a partner-owned executive search firm established in 1986, with six partners and a total of 16 professional staff. As a leading independent search firm in Norway, the organization enjoys a strong reputation for delivering high quality, research-driven executive search services, with a solid track record in a number of industries. It has an especially strong positioning in the public sector. The firm also offers leadership assessment and board services. Delphi Consulting will now operate as Amrop Delphi.

Mr. Dokken has extensive experience in management, strategy and management change in large enterprises. His main area of expertise is leadership assessment and executive recruitment in financial services, private equity and the retail sector. He has conducted numerous management audits and has been responsible for a large number of top level management searches for major companies.

“Our clients’ needs are changing, and there are new requirements for the next generation of leaders. We want to be at the forefront of this change,” said Mr. Dokken. “As a part of Amrop, we come closer to critical global developments and gain access to expertise, insights and best practices from around the world.”

Amrop Delphi focuses on executive positions in listed and unlisted companies, private equity and family offices – which control many of the large Norwegian family-owned fortunes. Amrop Delphi also has a track record working with publicly-owned companies, as well as recruiting for municipal and state executive roles.

“Anyone who follows the Norwegian market knows that Delphi Consulting has stood for trusted quality for decades. Their prime positioning and strong culture of collaboration make this a perfect match for Amrop,” said  José Leyún, CEO of the Amrop Partnership.

Today, Norway ranks as the second wealthiest country in the world in monetary value, with the largest capital reserve per capita of any nation. The Norwegian economy is an example of a mixed economy, a prosperous capitalist welfare state and social democracy country featuring a combination of free market activity and large state ownership in certain key sectors. It has large ownership positions in key industrial sectors, such as the strategic petroleum sector (Statoil), hydroelectric energy production (Statkraft), aluminum production (Norsk Hydro), the largest Norwegian bank (DNB), and telecommunication provider (Telenor). Through these big companies, the government controls approximately 30 percent of the stock values at the Oslo Stock Exchange.

Just recently, Amrop strengthened its staff with the addition of five new recruiters to its global team of search consultants. Jan Derk Bauerman was named principal and head of the firm’s real estate practice in Germany. Pablo Cavero was hired as a partner in Madrid. Carmine Coccorese joined the firm as a partner in Milan and is a member of Amrop’s global leadership services practice. Saša Fajmut has been named as a director, leadership services, in Ljubljana. Fadwa Mushtag joined Amrop as a consultant in Jeddah.

Amrop also expanded its team this past October with the addition of five other recruiters to its global team of search consultants. Lanre Fisher became managing partner for Amrop West Africa. Janine Dacon joined Amrop as a partner in Johannesburg where she focuses on the healthcare and industrial sectors. Sebastián Reyes was been named a partner in Santiago, Chile. Willem Ledeboer is now a partner in Amsterdam. And Sandy McKenzie became head of the firm’s industrial and infrastructure practices of Amrop U.K.

Over the summer, Amrop named Deepak Dalal as a member of its India industrial practice and leader of its automotive & engineering vertical; Winnie Chiu as an associate partner in Hong Kong; José Manuel Alonso as a consultant in Mexico City; and Jorge Milberg as a partner in Lima.