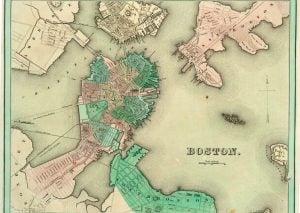 June 7, 2016 – Diversified Search has recruited Connie C. Chin as executive director for The Norman B. Leventhal Map Center at the Boston Public Library. The search was led by Andrew Wheeler, managing director and practice leader of the firm’s education and not-for-profit practice.

Ms. Chin is an accomplished leader with over 15 years of operational and management experience. She was most recently chief operating officer at The John F. Kennedy Library Foundation. There, she reported to the CEO and managed the internal operations of the $7 million private foundation that supported the JFK Presidential Library and Museum, a federal institution that has its own director and staff. Earlier, she was with Jacob’s Pillow, which hosts America’s longest running dance festival, and where she became GM with responsibility for finance, human resources, development, marketing, food service, technical production, and education. Earlier in her career, she served in marketing positions with Kraft General Foods.

“The Map Center is an incredible collection and resource for teachers, children, the public, and scholars,” said Mr. Wheeler. “We attracted individuals from around the United States and the world, and the successful candidate was right in the backyard. Connie will do a terrific job and work with a talented staff and engaged board.”

With a historically significant collection of over 200,000 (world, European and U.S.) maps and 5,000 atlases, The Map Center is ranked among the top 10 in the U.S. for the size of its collection, the significance of its historic (pre-1900) material, and its advanced digitization program. The collection is also the second largest in the country located in a public library, ensuring unlimited access to these invaluable resources for scholars, educators, and the general public.

In a related institutional search, Boston Public Library turned to Spencer Stuart to find its recently named president Jill Bourne. Spencer Stuart contacted and reviewed approximately 215 individuals for the position, presenting 30 qualified prospects to the library presidential search committee for evaluation. According to recruiters specializing in the sector, this search was one the most prestigious library searches to come along in several years.