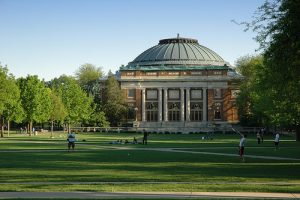 August 10, 2016 – Executive search firm Greenwood / Asher & Associates has placed Robert Jones as chancellor of the University of Illinois at Urbana-Champaign (UIUC). With more than 30 years of experience in public higher education, Mr. Jones is currently president of the University at Albany, State University of New York (SUNY). He has been at the helm of one of the SUNY system’s leading research universities since 2013.

His tenure there followed a 34-year career at the University of Minnesota, a Big Ten land-grant institution where he began as a plant physiologist in the department of agronomy and plant genetics and rose through a series of academic administrative appointments, serving as senior vice president for academic administration at the University of Minnesota System from 2004 to 2013.

In addition to chancellor of the Urbana University, Mr. Jones will serve as vice president of the University of Illinois System, which also has universities in Chicago and Springfield. His tenured faculty position will be in the Department of Crop Sciences, College of Agricultural, Consumer and Environmental Sciences (ACES). He is the first African-American scholar appointed as Urbana chancellor since the office was created in 1967.

University of Illinois president Timothy L. Killeen said Mr. Jones brings “a significant body of relevant life and academic leadership experience” to the chancellorship. “A distinguished scholar in the agricultural sciences, and a thoughtful and visionary leader in public higher education, with an exemplary record of accomplishment as a sitting university president for a research-intensive public university, he is simply ideally qualified to lead our institution into the future,” he added.

“The search process for the Urbana chancellorship was conducted in a most thorough and professional manner and the caliber of the candidate pool was simply extraordinary – a wonderful testament to the world-class stature and drawing power of the University of Illinois at Urbana-Champaign, its faculty and student body, and its long track record of excellence,” Mr. Killeen said.

“We received nominations from people in and outside the campus community. We spoke with dozens of prospective candidates before narrowing out list for stages of the interview process,” said Antoinette Burton, chair of the advisory search committee. “We were impressed by the depth, talent and competitiveness of the pool. And we were edified by the feedback we got about what a great university Illinois is and what a fabulous opportunity the chancellor job is for a leader seeking to maximize Illinois’ many assets at this moment in history.”

The University of Illinois at Urbana-Champaign is a land-grant institution and a member of the Big Ten, with almost 46,000 undergraduate and graduate students, 3,159 faculty and more than 11,400 total employees, an annual operating budget of $2 billion and a research portfolio of $468 million. It has 15 colleges and schools.