Menu
View our Events
Stay Connected:
With half of employers hiring, it looks like 2017 is shaping up to be a banner year for hiring managers, executive recruiters and job candidates. Let's take a look the latest forecast. 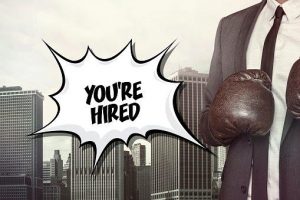 April 17, 2017 – Forty five percent of U.S. employers plan to hire full-time, permanent employees in the second quarter – a significant jump from 34 percent last year and the highest percentage for the quarter dating back to 2007, according to CareerBuilder‘s latest forecast. Temporary hiring is also expected to experience a double-digit boost year-over-year with nearly half of employers (49 percent) planning to add temporary or contract workers over the next three months.

The national survey was conducted online on behalf of CareerBuilder by Harris Poll. It included a representative sample of more than 2,300 hiring managers and human resource professionals across all industries and company sizes.

“This is the best forecast we have seen for the second quarter since we started doing this survey more than 10 years ago,” said Matt Ferguson, chief executive officer of CareerBuilder. “Nearly half of employers hired full-time employees in the first quarter and that momentum is expected to continue over the next few months.” He said companies are paying close attention to policies introduced by the new Trump administration to assess the potential impact on businesses, but the hiring outlook is “optimistic.”

Sheila Greco, founder of SGA Talent in Amsterdam, NY, said that for her firm the first quarter of the year has been strong and that she and her clients are also optimistic about the months ahead. “I know from a small business perspective, we see this as being a very positive time,” Ms. Greco said. “A lot of times people put their hiring on pause in an election year to see what happens with the outcome. Now that it’s over a number of our clients have just said, ‘You know what? We paused it for a while and now we’re going full bore. We need talent.’”

Anyone seeking employment in 2017 can expect to see more job choices and employers ready to hire, report recruiters from the field. It’s a great time to be job hunting, they say, though nearly all expect talent shortages to continue to be a problem for employers as the year unfolds. Nevertheless, it is a dilemma that ultimately can be avoided. Talent shortages have occurred for a few reasons: employers haven’t been willing to hire candidates to grow into a role and they haven’t invested in bringing their current staff up to the level they need. Therefore, there are fewer choices of candidates with the skills employers want as everyone wants someone to ‘hit the ground running.’ This, coupled with job seekers looking for 20-plus percent increases in salary to make up for the lack of raises and increases over the past few years, has left everyone treading water ….. Here’s some further reading from Hunt Scanlon Media.

Tightening Labor Market Good News for Job Seekers
Most employers have been wanting to hire, but now there is more confidence to actually pull the trigger now that the national election is over and talent acquisition leaders are refocused on building their people pipelines.

A greater sense of confidence among employers was certainly evident in the first three months of the year. Forty six percent of employers reported that they increased their number of full-time, permanent employees, outperforming the same period in 2016 by nine percentage points. It is also the highest percentage reported for the quarter dating back to 2007. Eight percent decreased headcount in the first quarter, a slight change from nine percent last year, while 46 percent reported no change in headcount and one percent was unsure.

Hiring On the Rise

Looking over the last several years, the hiring outlook for the second quarter has steadily improved, with the biggest year-over-year gains occurring between 2009 and 2010 and between 2016 and 2017: 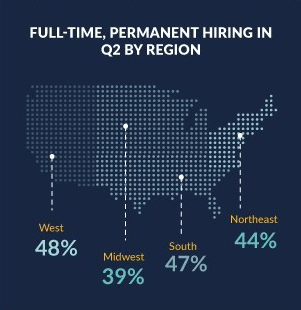 Comparing regions, the West houses the largest percentages of employers expecting to add full-time, permanent employees (48 percent) and temporary or contract employees (54 percent) in the second quarter. The South and Northeast are following closely behind while the Midwest continues to trail other regions by a larger margin – though the Midwest is showing notable improvement compared to last year.

The addition of temporary hires will continue to be strong going into the second quarter, according to the CareerBuilder report. Forty nine percent of employers expect to hire temporary or contract workers over the next three months, up 12 percentage points from 37 percent last year and nearly double the percentage (26 percent) in 2011, when the statistic was initially tracked post-recession.

Since the financial crisis of 2008, there has been an emergent skills gap that has plagued almost every industry. Numerous reports continue to come out citing that lack of quality talent is an issue among companies despite the large amount of people seeking new employment opportunities. “Companies that are growing want to hire really good people, and when you have an unemployment rate under five percent, there’s a shortage of them,” said Tom Gimbel, chief executive officer of recruiting firm LaSalle Network.

“Often the challenge for hiring executives isn’t the quantity of available candidates, instead it’s the increasing difficulty in finding talent that is qualified, with the right skills and cultural fit for the position,” said Jim Link, chief human resources officer (CHRO) of Randstad North America. People are the key factor linking innovation, competitiveness and growth for companies today, he said. “But securing skilled workers is getting more complex and challenging than ever before.” As organizations further increase their hiring activity, he added, low unemployment means business leaders will have to work harder at hiring and keeping quality talent particularly as employees gain more options and confidence to change employers.

The report concluded that by 2025 52 percent of C-suite executives said their organizations would be much more committed to building an agile workforce; the average employer expects 68 percent of their workforce to be comprised of agile talent. A separate study from CareerBuilder and Economic Modeling Specialists International concluded that hiring temporary and contract employees can help businesses sidestep talent gaps and remain nimble. The study showed more companies will be tapping into this labor segment, with temporary employment expected to add 173,478 jobs from 2016 to 2018 – an increase of 5.9 percent.

But according to Rick Gray, chief executive officer of Chicago-based a TalentRISE, “there are pros and cons of an ‘on demand’ workforce,” he said. “In seasonal industries, it may be ideal and is not a new concept.” As CEO of an expanding recruitment consulting and talent solutions business, he said TalentRISE itself has leveraged on-demand talent by deploying a network of specialized recruiters for urgent client hiring needs.

But cons, he said, can include the erosion of loyalty and pride, the risk of a workforce of pure multi-taskers and no specialization, and perhaps even an entire generation running from gig to gig with little financial stability. “If this trend is inevitable,” he asked, “then how might it impact talent acquisition in the long run?” The end goal, he said, of getting the best workers deployed most quickly at the least cost possible will not change. “But how we all get there will.”