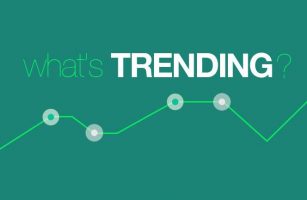 January 10, 2017 – This past year, America’s job market made remarkable gains. After years of lackluster pay growth and an anemic economic recovery, the jobs turned a corner in 2016. So what can we expect for 2017?

A new report by Glassdoor’s chief economist, Dr. Andrew Chamberlain, has revealed the five biggest jobs trends to watch for in 2017. The insights come as part of a new Glassdoor Economic Research report, outlining Dr. Chamberlain’s 2017 predictions for the U.S. labor market, including why automation will start to affect all jobs in 2017, why the gig economy might have hit its limit and how data science will transform HR and recruiting.

“With record numbers of unfilled jobs, historically low unemployment and rising pay, America’s labor market is one of the strongest in decades. In many ways, 2016 was a landmark year for hiring,” said Dr. Chamberlain. “However, technology and automation are changing the way we work forever, creating both opportunities and challenges for 2017 and beyond. In this environment, the future of jobs, employer branding and recruiting is top of mind for job seekers, employees and employers.”

1) Transformation of HR Into People Science

That’s for good reason. Companies are amassing more data today than ever in history. Data science is helping put that to work to build scalable, efficient solutions to ancient, fundamental business problems. How do we target sales prospects? Which product features delight users most? Which ad campaigns worked? All of these questions have been part of business for centuries. Data science today has faster, more scientifically based, and cheaper solutions to these core problems. And that’s translating into better business performance for companies investing in data science solutions.

One business area that’s way behind this curve is HR and recruiting. While most companies hire data scientists for product and marketing groups, data science today is still rare in HR and recruiting. This represents a tremendous lost opportunity in many organizations. In many of today’s companies the most productive assets are not machines and buildings but people — and their skills, ideas and know-how. Using data science in HR to make even small improvements in recruiting, hiring, and engagement has the potential for huge benefits to organizations.

2) Automation Will Change Every Job

Futurists have been warning about automation destroying jobs for as long as machines have been around — in farming, transportation, manufacturing, and today in retail and technology.

Research shows that large-scale job losses due to automation are unlikely. But what’s almost certain is that everyone’s job will change in some way. The growing reach of mobile devices, cheap data storage, and innovations in machine learning will bring surprising changes to the way we work in coming years. 2017 looks to be the year when these big advances in automation will start changing the daily work of more Americans.

The jobs that will be most affected by automation are routine jobs that need to be done the same way and that don’t require much flexibility or much creative judgment.

Some jobs perfectly fit that description, like long-haul trucking and urban taxi driving. Not surprisingly, 2017 is looking to be the year America sees automated vehicles revolutionize the way we move goods and people. Just as automated cranes dramatically changed the job of longshoremen at the ports in the 1980s and 1990s, every person working in transportation today should be bracing for changes around the corner.

White collar jobs are not immune to these trends. Gone are the days of in-person travel agents, and similarly self-service insurance portals are changing the way insurance agents work. For financial analysts, Tableau and other dashboard analytics tools are radically reshaping their roles. The growing suite of workplace productivity apps and automated surveying tools are helping transforming work in a vast array of skilled professional jobs.

For job seekers, the key to staying on the profitable side of automation is ongoing skill building. Workers increasingly need to build skills that are complementary to technology — learning to run the machine, not doing the same work the machine automates. As technology changes the landscape of work, workers will need to cultivate ongoing training, actively carving out time to re-sharpen skills on a permanent basis.

Thus the move toward ongoing “re-skilling” will take a big change in perspective for most white-collar workers. Just as professionals in law and medicine are required to satisfy ongoing professional development goals, we will see more organizations setting aside time for re-skilling to stay on top of the latest workplace technology. As companies build these efforts directly into their professional development programs, that’s something we’re likely to see more of in 2017 and beyond.

3) Shifting Away From Flashy Benefits Packages

The past decade has seen an explosion of exotic perks and benefits. Free meals, dog-friendly offices, video games, on site yoga classes, unlimited vacation and more. Tech companies have been pioneers in this trend, for two reasons. First, benefit escalation has been fueled by intense competition for tech talent. Second, fast growth and big venture capital deals have flushed many big tech employers with cash, giving them the means to finance a growing list of workplace perks not possible in more mature industries with thinner profit margins.

In 2017 and beyond, many of today’s tech giants will begin maturing into more traditional companies. Economic history teaches us that many other industries have followed the same general pattern as the tech industry is following today. New technologies develop. Early firms grow fast, are flush with cash, and innovate. Eventually those technologies mature, growth rates slow down, and companies come back to Earth, eventually turning their attention to costs and traditional profit margins.

As the tech industry matures, it’s likely that companies will be re-assessing their packages of benefits and perks. Ultimately, the goal of the compensation package — both pay and benefits — is to serve as a targeted investment, delivering great employee engagement and keeping talent on board long term. 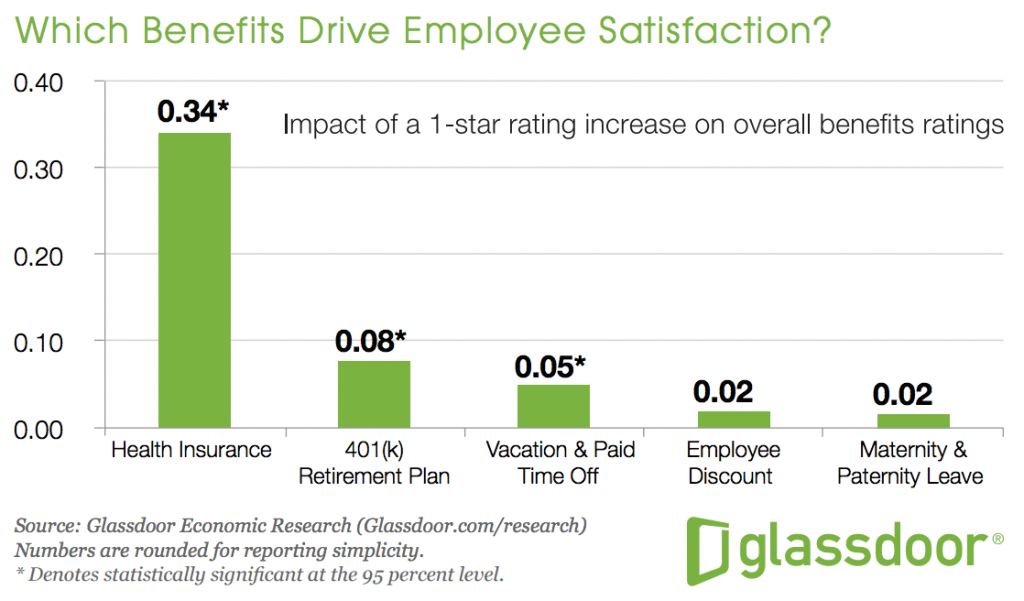 Not all perks and benefits are created equally. Glassdoor’s research shows that many of the more exotics perks today have a small effect on employee satisfaction compared to more traditional benefits like great health insurance, 401(k) matches, and generous paid time off. The data show that less traditional benefits like gym memberships, charitable gift matching, and pet-friendly workplaces — while certainly are important to some employees — on average have a surprisingly weak correlation with employee satisfaction.

In coming years, we’re likely to see large tech employers re-evaluating their benefits packages, more carefully focusing them on core benefits that offer the biggest bang for the buck in terms of engagement and productivity — rather than splashy headlines about unusual workplace perks.

In the past year, there has been a breakthrough in terms of popular awareness of the pay gap between men and women in the workplace. But talking about the gender pay gap is one thing. Actually doing something about it is another.

Two recent trends today are converging to create a rare opportunity to make lasting progress on this issue. First, growing pay transparency is allowing workers to more easily identify pay gaps than ever. Second, growing data availability in companies is allowed them to easily measure and correct pay gaps themselves, before it ever shows up in the data. 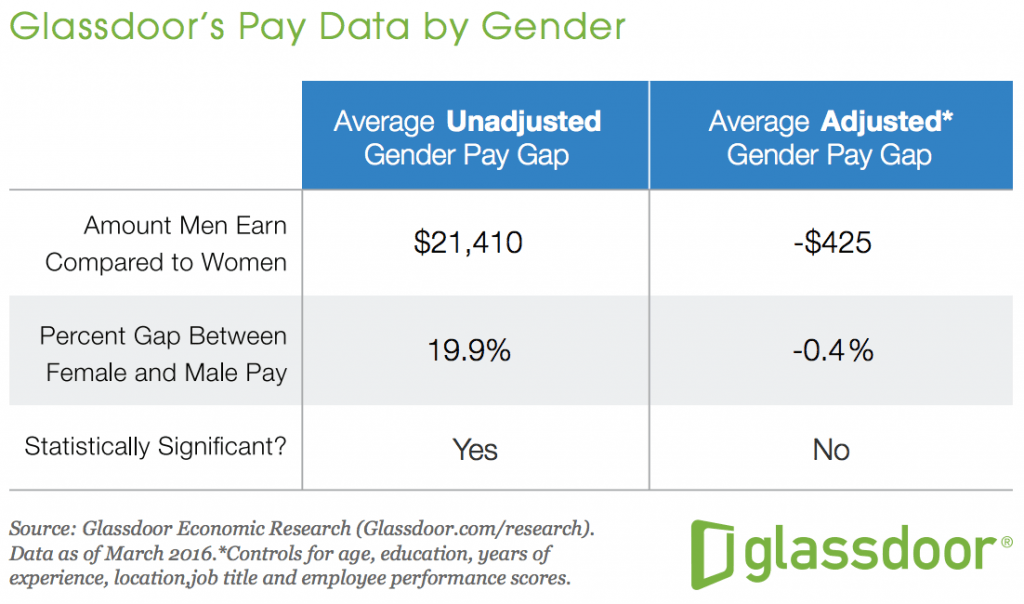 In 2017 and beyond, we are likely to see more companies taking positive action on the gender pay gap, using HR data to correct problems proactively in their own payrolls. Companies are beginning to realize that having a gender pay gap isn’t just about avoiding legal liability or negative publicity. It’s about having a positive employer brand, and attracting values-driven Millennial workers for whom gender pay fairness is a core workplace issue. A recent Glassdoor survey found 67 percent of U.S. employees said they were not likely to apply for a job at a company where men and women were paid unequally for the same work.

By building data-driven analyses of gender pay gaps right into the DNA of company pay practices, we expect to see more companies actually doing something about the gender pay gap in 2017, rather than just talking about it.

5) Realizing the Limits of the Gig Economy

Perhaps the only jobs trend growing faster than the ‘gig’ economy today is speculation about the gig economy. Are we becoming a nation of contractors? Are careers going the way of the dinosaur? Are full time jobs — a cornerstone of the employment relationship for centuries — being replaced by mobile apps?

For most workers today, the answer to all of these questions is a resounding “no.” One reason is size. Although platforms like Uber, Lyft, AirBnb, and Task Rabbit are highly visible, they’re still confined to a tiny corner of the economy. A recent J.P. Morgan Chase Institute study found only about 4.3 percent of U.S. adults had ever earned income from an online gig platform as of June 2016, and growth in gig platforms has fallen steadily in the last three years.

Even using a broader definition of gig work that includes all kinds of alternative work arrangements — temp jobs, contract workers, and freelancers — the impact is still small. A recent study from economists Lawrence Katz and Alan Krueger found the fraction of workers in any kind of gig-style work arrangement today is less than 16 percent of the workforce.

Without a doubt, there has been massive growth in the gig economy in recent years. And that growth has been positive for the U.S. economy. But growth in gig work will likely trail off in 2017 and beyond as reality sets in about the actual pros and cons of contract work — both for workers and employers.

As with any work arrangement, using contract or gig workers has both benefits and costs versus traditional employment. The big benefit is flexibility, both for job seekers and employers. When times are busy, employers can quickly pull in labor from the crowd, and job seekers take up gigs as schedules allow. That’s good for workers and can dramatically cut costs for employers.

However, the main cost of gig work is that — like automation — it only works for relatively simple jobs that are easy to measure, don’t require deep institutional knowledge, and don’t rely on long-term relationships.

Based on his research, Dr. Chamberlain draws the following conclusions. With today’s labor market is changing rapidly, it is becoming more flexible, more transparent, and more focused on skills than ever before. While these changes are sparking anxiety among some job seekers and employers, they also present tremendous opportunities.

The choice of where we work — and why — is one of life’s most important decisions. Today’s labor market is doing a better job of matching individuals with their best possible career opportunity than ever. However, the same rapidly changing technology that is making job markets work better today is also changing jobs themselves, putting workers who fall behind technology trends at risk.

As we enter 2017, the nation’s labor market is strong and growing. That makes it a great time for workers and employers to position themselves to benefit from these coming trends in the economy, and invest in skills and technology now while times are good.