Stay Connected:
Employers plan to increase staff and wages over the next few months, according to the latest job report released by CareerBuilder. Let’s take a closer look into the report’s findings as executive recruiters weigh in. 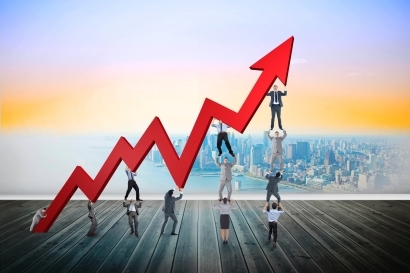 October 13, 2017 – Whether you are looking for permanent employment or a seasonal gig around the holidays, CareerBuilder‘s Q4 2017 Job Forecast predicts an uptick in both jobs and pay. Forty three percent of employers said they plan to hire full-time, permanent employees in the fourth quarter, up from 34 percent last year, and 73 percent plan to increase salaries.

Another 35 percent of employers also expected to hire seasonal workers in Q4, up from 33 percent last year; 51 percent planned to increase pay for seasonal staff. In addition, 50 percent of retailers said they are hiring seasonal employees, on par with last year (49 percent). The percentage paying $10 or more per hour jumped 23 percentage points over the last two years.

Nearly one in five workers (19 percent) said they are seeking a seasonal job over the holidays, up from 16 percent last year. The percentage of employers who are transitioning seasonal employees into permanent staff reached a new high (70 percent) and has grown at an accelerated rate over the last few years.

“Our survey is pointing to a significant year-over-year gain in permanent hiring and a smaller boost in seasonal hiring in Q4, though the short-term effects of hurricane damage on the U.S. mainland remain to be seen,” said Matt Ferguson, CEO of CareerBuilder. “One of the most telling trends from our research is that many employers are willing to increase pay for both permanent and seasonal staff. This speaks to the sharpening competitive dynamic among employers that we have seen throughout 2017.”

In the third quarter, 44 percent of employers added full-time, permanent headcount while 8 percent decreased headcount, both improvements over last year. Positive trends are expected to continue with 43 percent of employers saying they planned to hire new employees in the fourth quarter, up from 34 percent last year. Seven percent expected to reduce staff, down from nine percent last year, while 47 percent anticipated no change and three percent were unsure.

Retailers said they expect another busy shopping season and are becoming more competitive in terms of what they are willing to pay seasonal workers. Half of retailers said they plan to hire seasonal workers in the fourth quarter and, of these employers, two-thirds (66 percent) will pay them $10 or more per hour, a big jump from 53 percent in 2016 and 43 percent in 2015.

U.S. Employers Expect More Hiring for Remainder of 2017
A record number of hiring managers in the U.S. anticipate bringing aboard more employees in the next six months, according to the semi-annual hiring survey from DHI Group, an online career resource and talent acquisition platform.

Looking across industries, 35 percent of employers planned to have extra hands on deck to help with increased demands over the holidays, wrap up the year or ramp up for 2018. Of those hiring, 70 percent expected to hire some seasonal workers for full-time, permanent roles, up from 62 percent last year and up from 42 percent three years ago.

The West led all regions in the percentages of employers planning to hire full-time, permanent staff and seasonal staff in the fourth quarter (49 percent and 44 percent, respectively). The South reported the largest year-over-year improvement for both categories. While the Northeast and Midwest reported healthy increases in the percentages of employers hiring full-time, permanent staff, plans for seasonal hiring were similar to last year.

Biggest Mistakes That Can Cost You a Seasonal Gig

Flexibility is key in landing seasonal gigs, according to the study. When hiring managers were asked to identify what turns them off when they are interviewing a seasonal job candidate, refusing to work certain shifts was at the top of their list:

“We saw a record third quarter and the year-end seems to be keeping pace,” said Bill Vlaad, founder of executive search firm Vlaad and Company, which is based in Toronto. “Our clients are not seeing the industry regulatory changes, such as MIFID II or gender pay equality, or the competitive landscape changes with robo-advisors or crypto currencies, as reasons to stop hiring.”

“In fact, it appears most financial services firms are building defenses or adding products to their lineup in response to these recent expected changes,” he said. “But, while hiring is rampant, year over year compensation change for roles has faced continuous downward pressure. The chorus on pay seems to be ‘Do more with less, get paid less for the same level of activity, and promise less for future revenue and more for production today,’” Mr. Vlaad said. “In the industries where reductions in staff does outweigh hirings, firms seemed to appreciate that retooling careers take more time than in the past and are providing stronger outplacement packages in their severance to employees.”

“Last quarter, employees seemed to also have more willingness to pack up and change countries in order to secure or retain their choice career,” Mr. Vlaad said. “Often, it is at the request of their employer that they move, but more frequently employees are realizing the internationalization of business and are moving their families to stay competitive.”

“We have recently ‘baked in’ immigration lawyer initial consultations fees to our service offering given that non-domestic hiring happens more frequently,” he said. “The struggle we continued to see in Q3, like the rest of the year, was a lack of creativity from the hiring manager. They want the round hole to be filled by the round peg. And while international employees are talented and skilled, their lack of relationship management domestically still seems to land them in second place on the job offer front.”