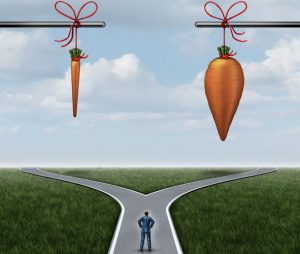 June 7, 2016 – In determining CEO compensation at top public companies, economic uncertainty, slowing revenue growth and negative shareholder returns are driving nearly flat compensation for CEOs, according to the recent Korn Ferry Hay Group CEO compensation study. CEOs received the lowest pay increase in five years and for the first time also in five years, shareholders experienced a negative return. The study examined all forms of pay for CEOs at 300 companies with revenue in excess of $9.2 billion.

Overall, total direct compensation for the 300 CEOs at the largest companies last year to file their proxy between May 1, 2015 and April 30, 2016 increased 2.7 percent to $11.7 million. That’s a slower growth rate than the previous year, which saw a median growth rate of five percent. Median annual compensation for CEOs was flat at $3.5 million, including base salary growth of 2.3 percent to $1.3 million and annual incentive payments remaining at $2.3 million. For the fifth year running, long term incentives increased, growing 5.1 percent to a median value of $8.4 million. 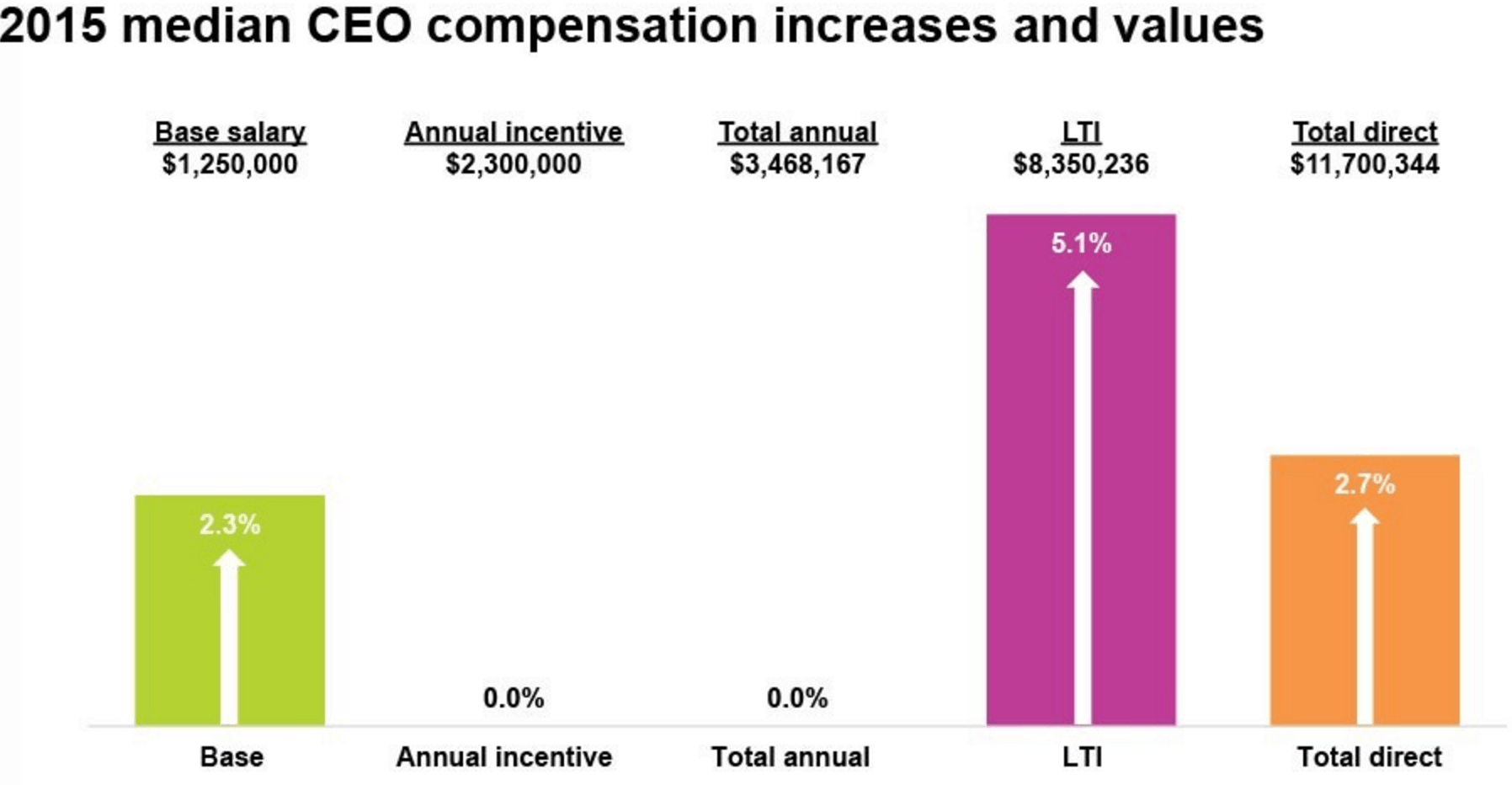 The smallest increase in the past five years in CEO total direct compensation (2.7 percent) corresponds to the first decrease in total shareholder returns (TSR) in five years with a negative TSR of -0.3 percent compared to a 17.5 percent return in 2014. Total revenue was also down -0.4 percent and net income growth among the companies was only 1.8 percent, compared to last year’s growth of 7.1 percent.

Performance-based long term incentives reached their highest level ever in this year’s study, accounting for 33 percent of CEO pay packages in 2015, which overall is up from 25 percent in 2011. Bonuses were the second heaviest weighted component of pay, making up 21 percent of the median CEO’s total direct compensation.

“Based on the current environment, we continue to see a shift to performance-based and long-term compensation packages for U.S. CEOs,” said Mr. Becker. “With this being the lowest total shareholder return since the beginning of the ‘say on pay’ era and active shareholders pushing for more performance-linked pay, it’s no surprise that we continue to see the use of more performance-based equity awards in our study this year, a trend that we expect to continue.”

So, are CEOs being paid fairly? That question is up for debate.

Seventy-one percent of public company directors believe that CEOs are paid the correct amount and 87 percent believe that CEO compensation is tied to performance, according to research released by rival recruiter Heidrick & Struggles and the Rock Center for Corporate Governance at Stanford University. These positive views on CEO pay contrast starkly with those of the American public who strongly believe that CEOs are overpaid and that pay levels should be reduced.

The Heidrick / Rock Center report also found that 66 percent of CEOs and directors believe that CEOs are paid correctly, based on the expected value of compensation awards at the time they are granted. CEOs (84 percent) are slightly more likely than directors (71 percent) to have this opinion. Conversely, a sizable minority of directors (25 percent) do not believe that CEOs receive the correct level of pay.

CEOs and directors overwhelmingly believe that CEO pay is aligned with performance. Ninety-five percent of CEOs and 87 percent of directors believe this to be the case. More than three-quarters (77 percent) also believe that compensation arrangements contain the correct mix of short and long-term incentives.

“When most directors think CEO pay is reasonable but most Americans believe that CEO pay is a problem, then you have a serious perception gap,” said Nick Donatiello, lecturer in corporate governance at Stanford Graduate School of Business. “With more and more of the American public owning stock through retirement accounts, pensions, and mutual funds, public outrage over CEO pay invites legislative or regulatory intervention. Directors need to make the case clearly and convincingly that the pay they offer is not only tied to performance but that it is deserved based on market realities, performance, and the CEO contribution to that performance.”

CEOs Are On the Move

Last year, 17 percent of the largest 2,500 public companies in the world changed their CEO, more than in any of the previous 16 years of the ‘CEO Success Study‘ from Strategy&, PwC’s strategy consulting business. Companies, however, don’t seem to be prepared to replace their top leaders.

According to a recent report by Egon Zehnder, many chairmen are concerned that their own companies are underprepared for a change of CEO and are exposed to the risk of a damaging leadership vacuum. “As companies face tremendous pressure from shareholders, activists investors, new competitors and digital disruption, it is essential to get succession right — and one aspect is planning and ensuring that you have a robust plan in place that looks at internal and external candidates and covers multiple scenarios,” said George Davis, global CEO practice leader for Egon Zehnder. The second aspect, he added, is weighing the risks and making an informed decision.

“The findings of our CEO succession study are cause for concern,” Mr. Davis said. “Many of the leaders interviewed felt that CEO succession planning in their own companies lacked rigor, and several pointed to sub-optimal CEO succession experiences of their own.”

Check Out These Related Articles On Pay and Performance:

Wages Are Up, But Switching Jobs Remains Best Way to Pay Raise Salaries to Remain On the Rise In 2016 Workers Set Sights On New Jobs In 2016 Salaries Rising Globally; Biggest Pay Increase In Three Years