Menu
View our Events
Stay Connected:
The CEO Economic Outlook Index dipped from last quarter, dropping below its historical average. CEOs seem to be tapping the brake. Let’s see what it all means for hiring from recruiting experts at Diversified Search and Connor Caitlin Talent Solutions.

September 24, 2019 – Growing geopolitical uncertainty, including U.S. trade policy and foreign retaliation, and slowing global economic growth, are among the reasons that CEO plans have waned, according to the newly released Business Roundtable “CEO Economic Outlook Survey.” The study is a composite of CEO plans for capital spending and hiring and expectations for sales over the next six months.

The CEO Economic Outlook Index decreased 10.3 points from last quarter to a value of 79.2, which falls below the index’s historical average of 82.7. While the lower index reading suggests some moderation in the pace of economic growth going forward, the index remains within growth territory.

“This quarter’s survey shows American businesses now have their foot poised above the brake, and they’re tapping the brake periodically,” said Joshua Bolten, president and CEO of the Business Roundtable. “Uncertainty is preventing the full potential of the economy from being unleashed, limiting growth and investment here in the U.S.”

“Opening markets and promoting rules-based trade remains vital to U.S. economic prosperity,” he said. “Congress and the Administration have the immediate opportunity to come together and provide stability and growth to our economy by enacting the U.S.-Mexico-Canada Agreement.”

All three components of the Index decreased in the third quarter: 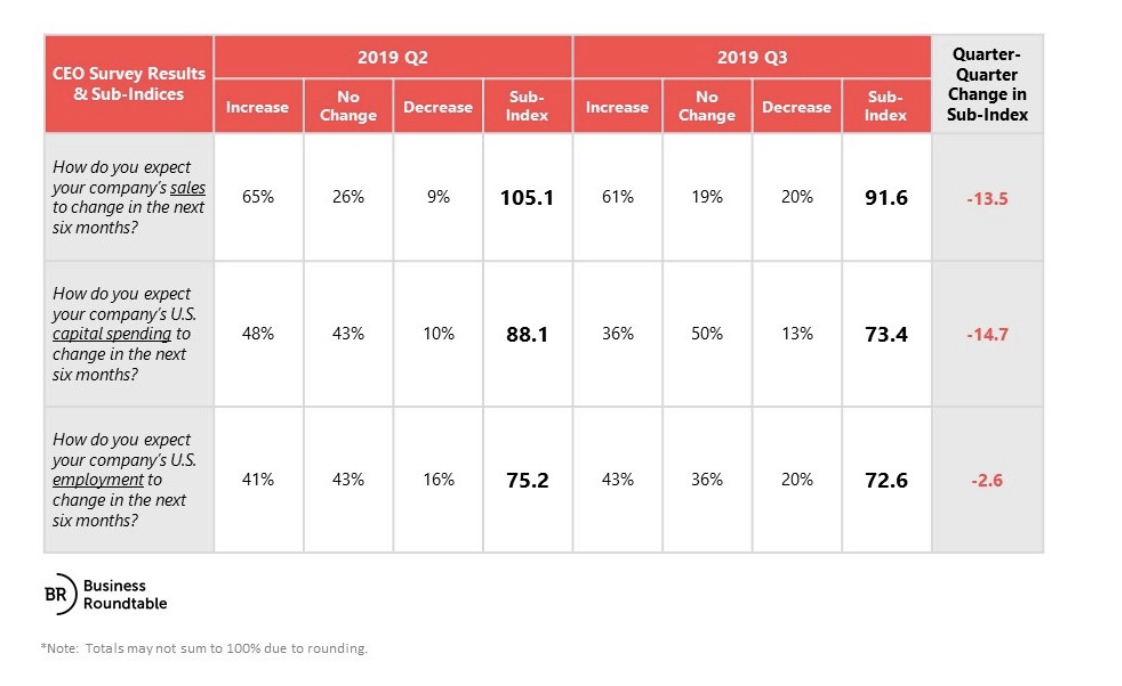 In their fourth estimate of 2019 U.S. GDP growth, CEOs projected 2.3 percent growth for the year, which dropped 0.3 percentage point from last quarter’s estimate of 2.6 percent.

While the index looks at expectations for the next six months, Business Roundtable posed a special question this quarter asking CEOs to look back at the last 12 months and report how U.S. trade policy and retaliation from foreign nations has affected their businesses. Almost no CEOs reported a positive impact on their business.

“I do think the decline in CEO confidence is an indicator that there remains unease among the nation’s corporate leaders that a protracted trade war — not only with China, but with Europe, Canada and Mexico — will most certainly impact economic growth, and quite possibly bring it to a halt sooner rather than later,” said Dale Jones, CEO of Diversified Search. 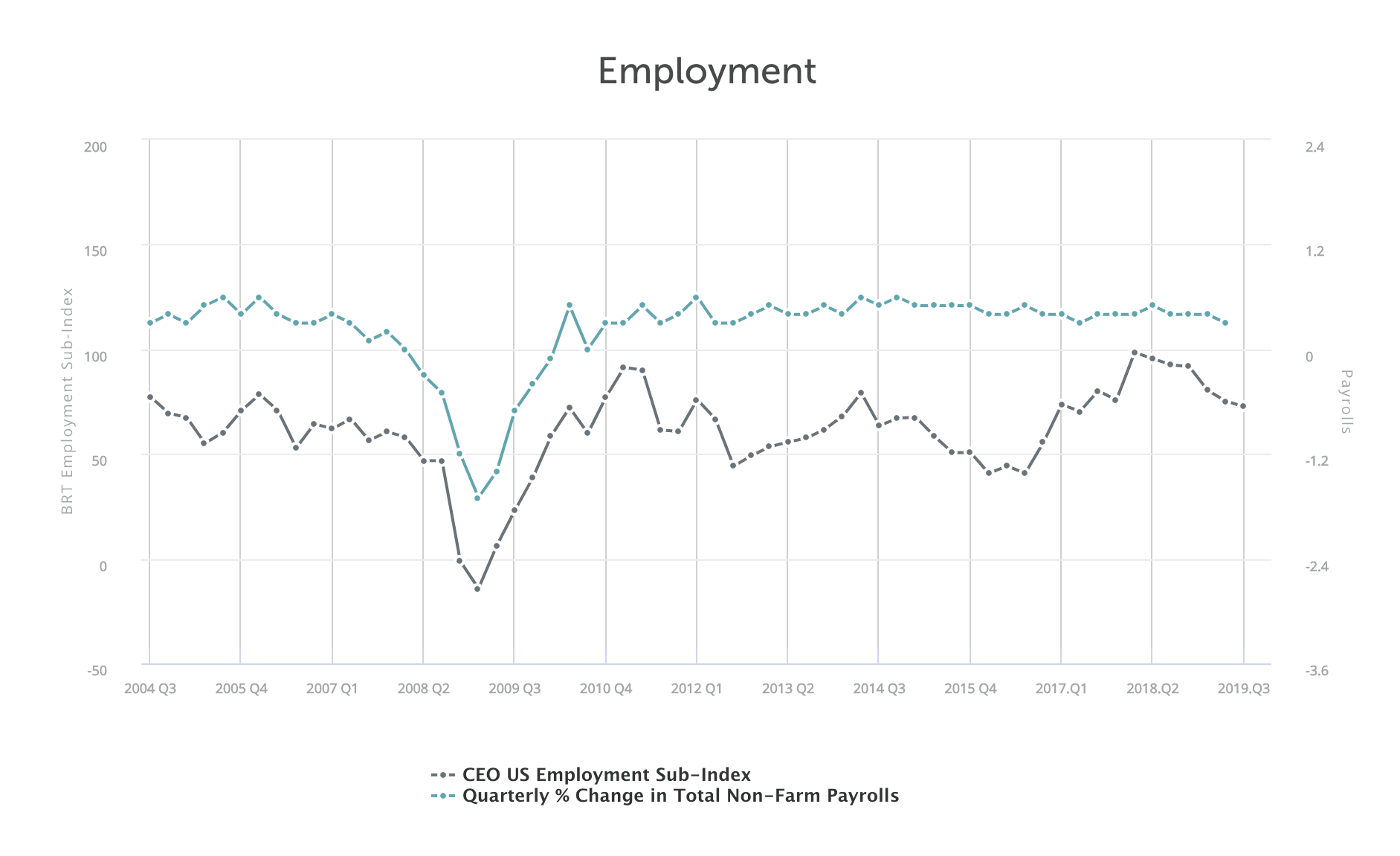 And tariffs matter, he said. “In my conversations with CEOs, there seems to still be a wait-and-see attitude, and a feeling that if the parties can actually be brought to the table to hammer out new trade agreements, it could end up being quite advantageous to the U.S.,” Mr. Jones said. “However, that is far from a done deal. CEO confidence is likely to further erode if some positive movement is not seen soon, particularly when it comes to the global economy, where the tumult over Brexit is weighing on investors. If there is one constant in the economy, it is that investors hate uncertainty more than anything else.”

Despite continued low unemployment and first quarter job creation, Connor Caitlin Talent Solutions, for one, is witnessing a slowdown in hiring in certain segments, said Michael Muczyk, managing partner of the Medina, OH search firm. “The paint and coatings segment has slowed due to several factors including; industry consolidation, domestic automotive manufacturing, and weather. Other segments remain strong for now.”

Job Growth Rebounds in June; Unemployment Rate Sits at 3.7 Percent
The economy is still creating jobs at a reasonable pace. In fact, companies seem to be hiring with abandon as we enter an unprecedented 11th year of expansion.

“While companies can be satisfied knowing their current employees are content in their roles, it does provide significant challenges in recruiting,” said Kathleen King, senior vice president, enterprise solutions for Yoh. “In times of low unemployment when a majority of employees are confident in their jobs and futures, it becomes more difficult than ever to attract new talent and recruit workers away from competitors.”