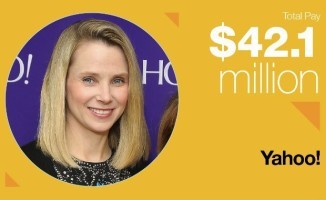 November 18, 2015 – Though they remain outnumbered in the top ranks in many companies by their male counterparts, female chief executive officers (CEOs) seem to be outpacing their male colleagues in terms of salary, according to research by the Associated Press and the executive compensation data firm Equilar.

Last year, median pay for female chiefs increased to $15.9 million, a 21 percent gain from 2013, according to both companies. This was compared with their male counterparts’ median pay that was $10.4 million, which was a decrease of 0.8 percent from 2013. Still, of the 200 top paid CEOs in America, just 13 are women.

Counting down from 10 to one, here are the highest paid female CEOs, based on the pay they received in 2014:

The maker of Cadbury chocolate, Oreo cookies and Trident gum had increased Irene Rosenfeld’s overall pay by 14 percent in 2014. The company’s stock increased three percent, compared with an 11.4 percent gain for the broader stock market. For three decades, Ms. Rosenfeld has been involved in the food and beverage industry, working for several prominent companies.

Though Patricia Woertz ended her near nine-year tenure as Archer Daniels Midland’s CEO in December last year, she is still holding the chairman position at the company, which manufactures ingredients, ethanol and vegetable oil used in packaged foods and drinks. Last year, she was listed by Forbes as the 85th most powerful woman in the world.

A 32-year veteran at Lockheed Martin, Marillyn Hewson is the second CEO at a defense company to top this list of highest-paid female CEOs. Her salary rose as the earnings of the company also rose, gaining nearly 30 percent. In 2014, she was named by Forbes as the 21st most powerful woman in the world.

Last year, as the boss of International Business Machines (IBM), she was awarded $3.6 million bonus for her performance, though the sales and revenue of the company declined. Her overall pay increased from 2013, when she and other IBM top executives did not take bonuses after the company saw disappointing results. For 10 consecutive years, she has been named to the ’50 Most Powerful Women in Business’ list in Fortune magazine, ranking first in 2012, 2013 and 2014. She was also one of the ‘World’s 100 Most Powerful People’ named by Forbes in 2014.

Before being promoted as the boss of General Dynamics in January 2013, Phebe Novakovic served as the senior executive for more than 10 years at the company, which is one of the top defense contractors in the world. Since she became the CEO, the company doubled its stock, boosted stock buy-backs and increased dividend payouts despite the shrinking defense budgets. In 2014, she was listed by Forbes as the 65th most powerful woman in the world.

As CEO of PepsiCo, which makes Gatorade sports drinks, Frito-Lay snacks and Quaker oatmeal, Indra Nooyi has helped improve the company’s performance by slashing costs and raising prices. Though recently their earnings were hit by currency volatility in countries, such as Bolivia and Russia, it was offset by growth of the Doritos, Cheetos and Tostitos maker, Frito-Lay North America. Consistently, Ms. Nooyi has ranked among the Forbes magazine ‘World’s 100 Most Powerful Women,’ ranking 13th on the list last year.

When Meg Whitman rejoined Hewlett-Packard in 2011, the company’s board of directors established a standard initial annual salary, but last year, they decided to increase her salary package to make it consistent with other CEOs at companies in the same niche as theirs. From 1998 to 2008, Ms. Whitman served as CEO and president of eBay.

Martine Rothblatt is an American lawyer by training, and a life-long entrepreneur. She began her work first in the field of communications satellite law, but eventually turned her sights on life sciences and the Human Genome Project.

Since Yahoo! hired Marissa Mayer from Google in July 2012, the search engine company’s stock price has climbed by 177 percent. The company’s earnings jumped in 2014 after it raised $9.5 billion by selling a portion of its stake in its Chinese e-commerce site owner, Alibaba. In 2014, Ms. Mayer was ranked sixth on Fortune’s 40 under 40 list and 16th on the same publication’s most-powerful businesswoman in the world list.

Diversified Search placed Angelica Ocampo as president and CEO for the World Affairs Council of Pittsburgh, a leading forum to ensure that the Pittsburgh region has a dynamic international presence.

DHR International placed Pamela M. Iacobelli as president and CEO of CultureSource, a professional association comprised of 115-plus organizations serving the region as non-profit enterprises for the arts and culture. Cyd Kinney, a partner in DHR’s Detroit office, led the search.