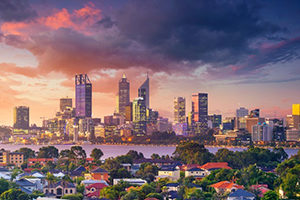 December 10, 2018 – Stanton Chase International has continued its recent expansion with the opening of a new office in Perth, Australia, led by directors Tony Taylor and Greg Preston. They bring a combined 55 years of executive search and business experience in the industries most relevant to the region.

The expansion into the Western Australian market represents an important step in the organic and strategic business growth in the Asia Pacific region, said the firm.  Australia has an economy characterized by a strong domestic market on the east coast, dominated by financial services, education, life sciences and FMCG based manufacturing; the western third of the continent is dominated by strong outward-facing export industries such as agriculture, fisheries and critically, natural resources and energy.

“The firm’s expansion into Western Australia will allow better service for our existing client base in Australia, while offering our global clients in the mining and hydrocarbons business a more complete service through the acquisition of significant expertise in these business segments,” said Fiona Lavan, managing director of Stanton Chase in Australia.

Mr. Taylor previously served as the director of Concorde Executive Search, which specializes in finding and placing senior executives, board members and external consultants for mining and resources companies in Australia. Before that, he was managing director of Asia Pacific for Gerard Daniels. Prior to embarking on a career in search, Mr. Taylor was a partner with KPMG in Western Australia and Singapore, where his focus was on building service capacity in the Asia Pacific region to better serve global clients.

“I am thrilled to join the Stanton Chase team and have this opportunity to expand into West Australia,” said Mr. Preston. “I have already developed strong collaborations with other members of the firm’s international team, and I look forward to the productive years to come.”

Mr. Preston has over 20 years of experience in executive search, with the primary focus of his search practice being senior technical, operational and project leadership roles within the natural resources, energy and industrial sectors. Before joining Stanton Chase, he operated a boutique, Concorde Executive Search, with a strong focus on the Australian mining sector and its projects and operations offshore. Prior to that, he held a global headhunting role with a Tier One EPCM firm, and consulted in Australia, Southeast Asia and the South Pacific for BHP, Rio Tinto and Vale.

“I am excited about the great opportunities ahead,” said Mr. Taylor. “Stanton Chase is truly a world-class search firm, and it is now better positioned with our new Perth office, for both local and international searches in the industry.”

Stanton Chase recently added veteran search consultant J. James O’Malley as managing director in its Chicago office. He serves as a senior member of the professional services and financial services practice groups for Stanton Chase. Most recently, he was a partner and executive search practice leader at TalentRISE, a recruitment solutions firm in Chicago.

In April, the firm opened a new office in Seattle. David Kimbro, a senior executive search veteran of almost 20 years, joined the firm as managing director of the new location. With broad experience in functional leadership across the C-suite, Mr. Kimbro’s clients range from start-ups to large public companies.

Stanton Chase began the year by opening an new office in Washington, D.C. Jeff Perkins was appointed managing director of the location. Mr. Perkins has vast experience in leadership consulting and executive development as CEO of Huntbridge, a leadership consulting firm that provides hand-crafted solutions for talent leaders.

Stanton Chase also opened an office in Philadelphia. Dan Hobbs was named managing director of the new location. Mr. Hobbs brings over two decades of experience in search and leadership assessment projects for a broad range of privately and publicly held companies.

Stanton Chase also appointed new leaders in several of practices over the past year. In December, the firm added Scott Clark as managing director in its industrial, engineering and construction practices. An experienced human resources executive, Mr. Clark has placed hundreds of senior executives in a variety of functions across these sectors.