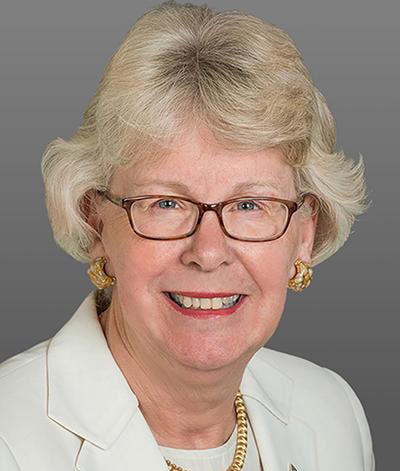 Nancy Targett, Ph.D., joined AGB Search in 2018, bringing with her executive search experience at the dean, provost, and presidential levels. Her work is informed by more than 34 years of executive service in higher education. Dr. Targett is an Ocean Scientist who brings a multidisciplinary perspective to her work and has been a change agent focused on positioning institutions for success in a dynamic academic landscape.

In her role as President of UD, she fostered a campus-wide innovation ecosystem that expanded entrepreneurship and public-private partnerships at the institution.  She led the team that formed First State Marine Wind (FSMW), a joint venture between the University and Gamesa Technology Corporation and served on its board of directors for six years. FSMW built a commercial scale wind turbine on the marine campus for purposes of education, research, and development.  The multidisciplinary team included engineers, scientists, policy analysts, and elected government officials.

At UD, Dr. Targett expanded the footprint and portfolio of the College of Marine Studies to become the College of Earth, Ocean, and Environment and developed several academic partnerships such as the Coastal Resource Management Program with Xiamen University, China, that included a dual Ph.D. degree in Oceanography, and the Applied Environmental Science Alliance with the University of Washington and private sector partners such as OceanGate, Inc.  These efforts drew on her experiences as Director of the Delaware Sea Grant College Program, whose mission was to translate applied research into projects for the greater good.  She received the Order of the First State from Governor Jack Markell in recognition of her contributions to the State of Delaware.

At UNH, Dr. Targett continued to promote university relationships with external partners and focused on initiatives related to recruiting and retaining students as resources for future workforce and research partnerships. She established a task force that advised the workforce development lead on a Department of Defense (DoD) Advanced Regenerative Medicine Initiative (ARMI) that involved university, private sector, and state partners.

Dr. Targett served a three-year term as the Chair of the Board of Trustees for the Consortium of Ocean Leadership, a Washington, D.C. based group of 100 universities and industries aimed at advancing ocean research and technology.  She has held multiple elected positions for the National Sea Grant Program and has served on several National Academy Of Science panels where she chaired two of those panels.