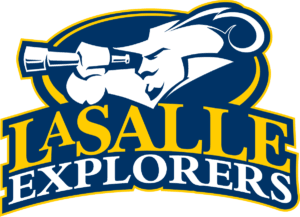 “I am thrilled to welcome Brian to the Explorer family,” said Colleen M. Hanycz, president of La Salle. “Brian rose to the top of a highly-qualified candidate pool. His depth and breadth of experience in Division I athletics leadership coupled with his commitment to integrity and the holistic student-athlete experience make him the perfect choice to lead La Salle athletics into this next chapter.”

A rising star in his field, Mr. Baptiste comes to La Salle after nearly seven years at Northwestern, where he has served as deputy director of athletics for capital projects and operations since 2015. In that role, he was responsible for all capital projects for athletics and recreation and had oversight of athletic facilities, event management, equipment services and recreation. Previously, Mr. Baptiste spent nearly three years at the University of Delaware where he held the title of associate athletic director for compliance.

“Brian is a great choice to continue the upward trajectory of La Salle University athletics,” Mr. Bradshaw said. “Jim Phillips is a dear friend of mine and has spoken very highly of Brian’s accomplishments at Northwestern. I couldn’t be happier knowing that my alma mater is in such capable hands.”

La Salle University was established in 1863 through the legacy of St. John Baptist de La Salle and the Brothers of the Christian Schools teaching order, which St. La Salle founded in 1680. Globally, Lasallian education reaches over one million students in 77 countries on six continents; this includes more than 1,000 schools, universities, and centers of education, and 65 colleges and universities with six located in the U.S.

“This is a dream opportunity to work at an institution with a rich history and storied tradition rooted in unwavering faith, service to others and a commitment to developing the entire person, all in a world-class city like Philadelphia,” said Mr. Baptiste. “Through strong alignment with the university’s mission and values, our coaches and staff will be inspired every day to provide an exceptional student-athlete experience academically, socially and athletically for the sustained success of all La Salle Explorers.”

SRi, an international executive search firm focused on the sports, media and entertainment sectors, published a report recently on how the modern day AD serves more as a CEO-type function than as a coaching figurehead. SRi recently spoke with several university presidents on this topic.