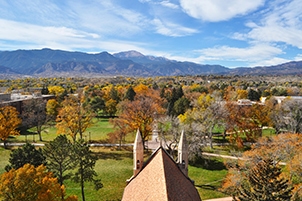 “Lesley Irvine will bring great leadership, vision and energy to Colorado College,” said Jill Tiefenthaler, the school’s president. “She has a wealth of fitting experience and success, from being a national champion student-athlete to coaching conference championship teams, to being an outstanding administrator of both Division I and Division III athletics departments. Lesley is a dynamic leader who cares about student academic and athletic excellence, and I’m excited for her to lead here at Colorado College.”

Ms. Irvine, who assumes her new role on June 1, has 17 years of experience as a coach, campus health and wellness advocate, and athletics director. She currently serves as administrator, director of athletics and recreation, and the chair of physical education at Pomona and Pitzer colleges. With Pomona-Pitzer athletics, which serves two colleges, Ms. Irvine manages 21 intercollegiate teams, the Pomona physical education curriculum, faculty/staff fitness and wellness programs, and club, intramural and recreation programs. She led the department to 15 Southern California Intercollegiate Athletic Conference championships and its first SCIAC Men’s All-Sports Trophy in 2018.

Ms. Irvine also serves as chair of the Athletic Administrators Committee for the SCIAC and is on the Division III National Women’s Basketball Committee. She was a founding board member of the Alliance of Women Coaches. Prior to joining Pomona-Pitzer, Ms. Irvine was the senior associate athletic director and senior women’s administrator at Bowling Green State University from 2010 to 2015. From 2001 to 2010, she was field hockey head coach at Stanford University.

“I want to thank president Tiefenthaler and the search committee for this exciting opportunity,” said Ms. Irvine. “Colorado College is a special place and I am honored to be chosen to lead the athletics department.”

For more than a half century, Odgers Berndtson has delivered executive search, leadership assessment and development strategies to organizations globally. The firm’s 250-plus partners cover more than 50 sectors and operate out of 59 offices in 29 countries. The U.S. wing of the firm launched in 2011, and under Mr. Potter’s stewardship it has become one of the fastest growing search firms in the Americas. Odgers Berndtson currently has U.S. offices in Atlanta, Austin, Boston, Chicago, Dallas, Denver, Houston, Los Angeles, Miami, Minneapolis, New York, Philadelphia, San Francisco and Washington, D.C.

Korn Ferry placed Malcolm Turner as the vice chancellor for athletics and university affairs and athletics director of Vanderbilt University. Jed Hughes, who heads Korn Ferry’s sports practice, led the assignment alongside senior associate Kyle Bowlsby. Mr. Turner, who joins the school in February, is currently serves as a member of the NBA’s senior leadership team and president of the NBA G League.

Eastman & Beaudine recently placed Michael Kelly as the new athletic director of the University of South Florida (USF). Mark Harlan stepped down from the post this spring. Mr. Kelly most recently served as COO for the College Football Playoff, where he directed the organization’s day-to-day operations and was instrumental in launching the playoff.

Turnkey Sports and Entertainment has placed Damin Evans as the new AD of the University of Maryland. Founder and CEO Len Perna, as well as managing director Gene DeFilippo, formerly Villanova’s athletic director, led the assignment. The previous AD, Kevin Anderson, took a six-month sabbatical and then resigned in April.