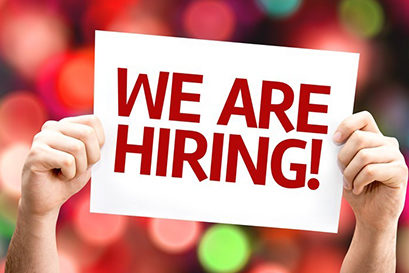 June 13, 2019 – U.S. employers are expecting hiring to pick up as we round out the second quarter, with 21 percent of employers planning to add staff, according to the latest “Employment Outlook Survey,” released by ManpowerGroup. Employers in all U.S. regions and industry sectors said they are expecting headcount to grow. This is the seventh consecutive year of double-digit hiring outlooks in the U.S., according to the survey of more than 11,500 U.S. employers.

Hiring plans were slightly stronger in five nationwide industry sectors when compared with the second quarter of 2019. Other services sector employers nationally expected the strongest labor market since the sector was first analyzed separately in 2009. Hiring intentions also improved slightly in the construction, education and health services, information, and leisure and hospitality sectors. In six national industry sectors, hiring prospects remained relatively stable when compared with the previous quarter: financial activities, durable goods manufacturing, nondurable goods manufacturing, mining, transportation, and utilities and wholesale and retail trade. The results for the mining sector were reported only in the national survey data to ensure statistical accuracy.

Employers in all four regions in the U.S. showed a positive outlook for the coming quarter. Employers in 28 percent of Midwest businesses surveyed said they expect to grow payrolls during the forthcoming quarter. Three percent of employers expected to trim staffing levels, and 68 percent anticipated no change. Leisure and hospitality sector employers in the Midwest reported considerably stronger hiring intentions for the next three months when compared with the previous quarter. Employers in three Midwest industry sectors anticipated moderately stronger hiring activity in comparison with the second quarter of 2019: construction, government and information.

In the Northeast, employers in 26 percent of businesses surveyed said they expect to add to payrolls during the third quarter of 2019, while four percent anticipated a decline and 69 percent expected no change. Moderately stronger hiring activity was anticipated in two of the Northeast’s industry sectors during the next three months, when compared with the second quarter of 2019: information, and professional and business services. Employers in three Northeast industry sectors expected slightly stronger labor markets when compared with the previous quarter: education and health services, government, and transportation and utilities. Northeast employers in five industry sectors reported relatively stable hiring plans quarter-over-quarter: construction, financial activities, nondurable goods manufacturing, other services, and wholesale and retail trade.

In 26 percent of businesses surveyed in the South, employers said they expect to add to staffing levels during the July to September period. Four percent of employers expected to trim payrolls and 69 percent expected no change. Hiring intentions were moderately stronger for two industry sectors in the South when compared with the previous quarter: government and other services. Slightly stronger hiring plans were reported in four of the South’s industry sectors: construction, education and health services, financial activities, and professional and business services. In four industry sectors across the South, employers reported relatively stable hiring prospects quarter-over-quarter: information, durable goods manufacturing, nondurable goods manufacturing, and wholesale and retail.

Employers in 28 percent of businesses surveyed in the West expected workforce gains during the coming quarter, while three percent anticipated a decrease and 68 percent expected no change. In three of the West’s industry sectors, employers reported moderately stronger hiring intentions for the third quarter when compared with the previous quarter: information, professional and business services, and transportation and utilities. Slightly stronger hiring prospects were reported in four of the region’s industry sectors: financial activities, government, leisure and hospitality, and nondurable goods manufacturing. 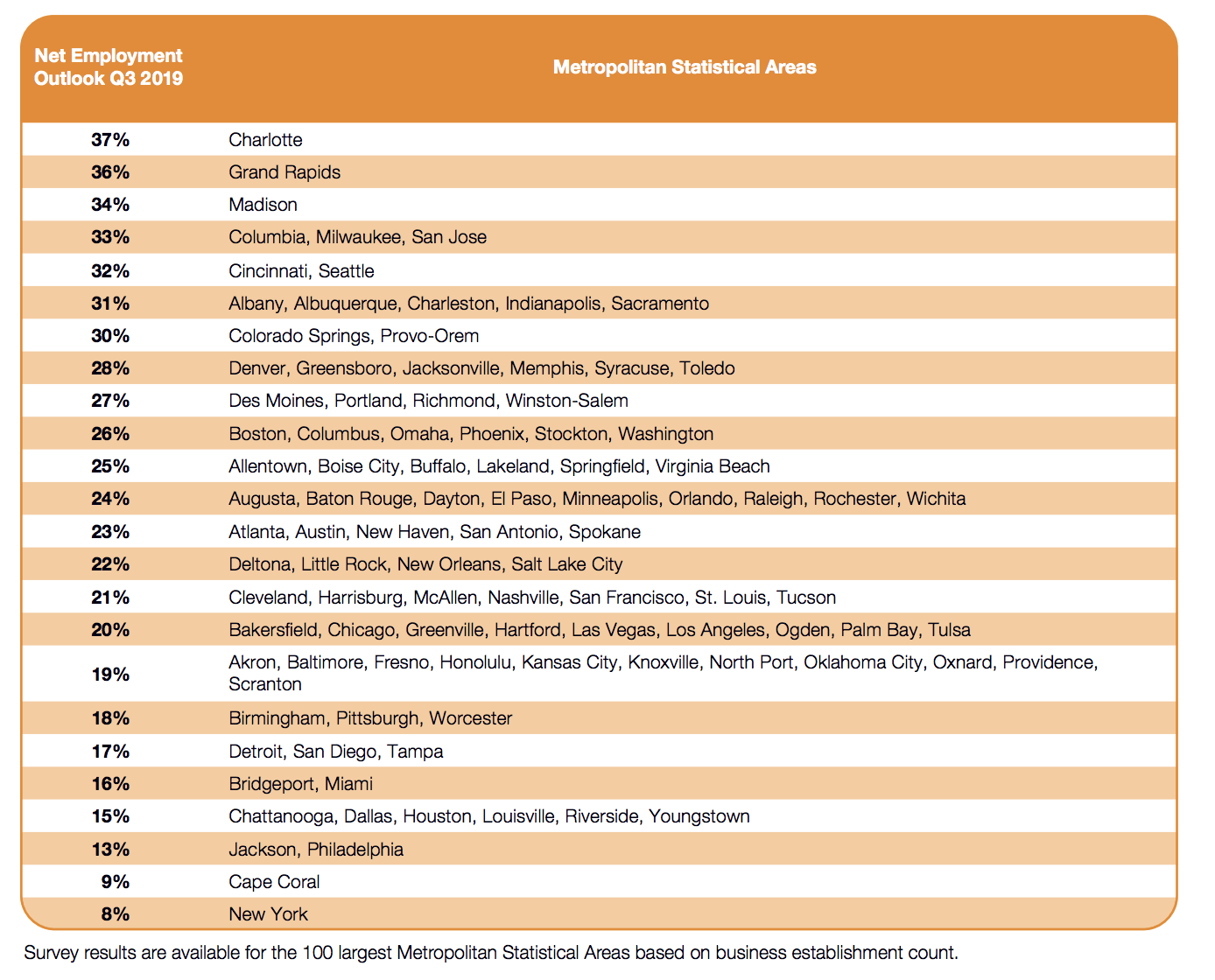 ManpowerGroup interviewed over 59,000 employers in 44 countries and territories to forecast labor market activity* in the third quarter of 2019. All participants were asked, “How do you anticipate total employment at your location to change in the three months to the end of September 2019 as compared to the current quarter?” The ManpowerGroup research for the third quarter of 2019 revealed that employers expect workforce gains in 43 of 44 countries and territories surveyed in the period up to the end of September.

When compared with the previous quarter, employers in 18 of 44 countries and territories reported stronger hiring prospects, while employers in 18 reported weaker hiring plans and no change is anticipated in eight. In a comparison with the same period last year, hiring intentions strengthened in 12 countries and territories, but weakened in 26 and were unchanged in six. The strongest hiring sentiment was reported in Japan, Croatia, Taiwan, the U.S., Greece and Slovenia, while the weakest hiring prospects were reported for Hungary, Argentina, Italy and Spain.

Payroll gains were anticipated by employers in 25 of 26 Europe, Middle East and Africa (EMEA) region countries surveyed during the next three months, while employers in Hungary expected to trim payrolls. When compared with the second quarter of 2019, hiring prospects improved in five countries but weakened in 14. In a comparison with the third quarter of 2018, outlooks also strengthened in five countries, but declined in 17. The strongest hiring expectations for the coming quarter were reported in Croatia, Greece and Slovenia, while employers in Hungary, Italy and Spain reported the weakest hiring plans.

Unemployment Rate Remains at 50 Year Low
Here’s the latest jobs report, with Bob Lopes, president of Randstad Sourceright in North America, weighing in. Only 75,000 jobs were created in May – is this a warning sign for a slowing economy?

Job seekers in all 10 Americas countries surveyed can expect hiring opportunities in the forthcoming quarter, according to employers. When compared with the previous quarter, hiring prospects improved in eight countries, but weakened in two. In a comparison with the same period last year, outlooks improved in five countries but declined in four. U.S. and Canadian employers reported the strongest hiring prospects for the coming quarter, while the weakest outlooks were reported in Argentina and Panama.

“I always look forward to the Manpower report on nationwide hiring intentions,” said Richard Risch, founder, chairman and CEO of New York-based executive search firm The Risch Group. “First, I am a Milwaukee boy, born and raised. So I have several close contacts at the firm that I stay in touch with to talk Packers, Brewers and, of course, hiring trends.”