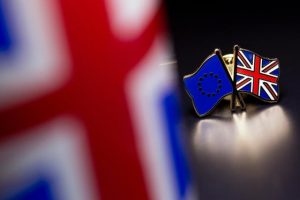 July 1, 2016 – There’s a crisis slowly unfolding at executive search firms across London – especially for those with exposure to the financial services markets. But with globalization run amok, bringing with it all sorts of unforeseen challenges, the reverberations in the world’s second largest search market are also being felt as far away as Chicago and Los Angeles, home to the recruiting sector’s two publicly held talent giants.

At stake is the sheer survival of dozens of search firms with practices dedicated to landing top jobs for leaders in London’s massive banking sector. As many as 100,000 finance positions could be wiped off the streets of the City – London’s equivalent to Wall Street – within a year, as the sector grapples with the stunning effects of Brexit.

Professional service firms, in general, are expected to feel a pinch in business, but for headhunters the exposure, and widening sense of unease, is growing palpable. Crisis management meetings were called at many of the boutique recruitment providers across London this week, while most of the major executive search firms are said to have convened their top brass the day after the vote. All are fixated on the meaning of Brexit for their businesses and how much exposure they might have in the weeks, months and years to come.

For the two public global search firms, in particular, there are several issues at play. Heidrick & Struggles maintains a headcount of 152 employees in London – and one third of them, or 53 recruiters, are consultant rank. They need searches to survive, and Heidrick needs their search proceeds to pay its bills.

During the last 11 years, Ms. Hibbert has served as a lead partner at the firm. How she plans to cope in her new role is anyone’s guess, but difficult days full of tough decisions lie ahead.

Joining her in figuring it all out is David Boehmer, who was installed the week before Ms. Hibbert was appointed, as Heidrick’s global financial services practice leader. As fate would have it, Mr. Boehmer served as the firm’s Americas regional managing partner for financial services but relocated to London recently to cover the sector in Europe and Africa.

Since the Brexit vote, Heidrick has seen its stock price dip under a 52-week low, while its market cap has tumbled to about $300 million. As investors begin to take in the full after-effects of Brexit, they are clearly anticipating a slowdown in business at the fourth largest recruiter. Last year the search firm enjoyed revenues of over a half billion dollars. Whether it falls below that threshold in this cycle remains to be seen.

Rumors have long persisted that if Heidrick’s market cap fell under its current level, the firm might be in play as an acquisition target. It wasn’t too long ago that its market cap was going in the other direction, with $500 million in its sights. Professional services firms with an eye on opportunity and expansion are watching Heidrick very carefully these days. One of their chief executives said earlier this week in a phone call that his team had been “watching” Heidrick’s market cap closely and that, indeed, a value that dipped below $300 million was “a trigger point.”

Heidrick has been in private merger talks before, notably with staffing giant Manpower. That company has a market cap of $4.5 billion and could easily handle an acquisition of this size. Manpower is said to have been interested in Heidrick during its last round of talks for two reasons: growth and easy entre to decision makers in the boardroom.

Heidrick’s recruiters have placed some of the best known chief executives in the world, including Robert A. Iger at The Walt Disney Companies, Louis V. Gerstner at IBM, George Fisher at Eastman Kodak, Robert Goizueta at The Coca-Cola Companies, and Paul Tagliabue at the NFL. The roster is endless, and so is the firm’s highly prized access.

Heidrick is one of a small band of marquee search brands that provide high touch recruitment and assessment advice to global business C-suites. Three of its nearest direct rivals include Spencer Stuart, Egon Zehnder and Russell Reynolds Associates. These privately held leadership solutions providers collectively took in nearly $1.9 billion in global fee income last year, according to recent data compiled by Greenwich-based Hunt Scanlon Media. It doesn’t take much to see why billion dollar strategic advisors, like McKinsey & Co. and Accenture, with expanding people analytics and predictive hiring services – human capital’s emerging science-based offerings – might also have a reason to be taking a serious look at Heidrick & Struggles.

Tracy Wolstencroft, a 25-year former Goldman Sachs executive who was managing director and head of Goldman’s municipal finance and infrastructure group, was pulled out of retirement and joined Heidrick two and a half years ago as president and CEO. His mandate was to stabilize a brand that had been hard hit with significant financial and partner losses. He has to a certain extent succeeded, and he has overseen several important, albeit small acquisitions during his tenure.

But Gary Burnison, CEO at rival Korn Ferry, outmaneuvered Mr. Wolstencroft last December when he orchestrated the largest acquisition the search industry had ever seen, acquiring Hay Group for close to a half billion dollars. Korn Ferry, in one fell swoop, changed the discourse of what it means to be a leadership solutions provider serving the increasingly complex talent needs of companies looking for 21st century competitive advantage. This has led some industry observers to wonder out loud whether Mr. Wolstencroft’s gold plated M&A credentials might now come into play. 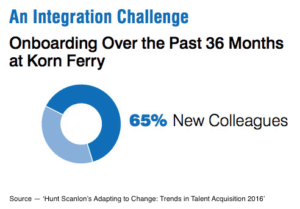 Whether Korn Ferry can successfully integrate some 3,000 employees that have come along with its blockbuster Hay deal – and whether it, too, can stave off acquisition-minded rivals outside its traditional turf remains to be seen. Korn Ferry, the world’s largest search provider with over a billion dollars generated in fee revenues last year has, like Heidrick, seen its own stock price plummet and its market cap follow along for the long ride down since Brexit became a reality. The firm’s exposure to London is big and the fallout could, in time, put it in the crosshairs as well. Since taking on Hay Group, Korn Ferry has more than 400 employees on the ground in London. But as clients in financial services and beyond bolt to other safe havens in Europe, one wonders what all of these talent providers will do. Some long time industry watchers say we might very well be looking at another change in the ownership structure of search firms as we now know them.

In two weeks Hunt Scanlon will take a look at the Brexit effect on London’s other search providers, including the sector’s boutiques. Unlike their large global counterparts, these players are nimble and many are making fast moves to ‘hedge’ against the fallout from the U.K.’s recent decision to abandon its business ties with Europe. We look at one significant strategy now underway. In the meantime, if you’d like to read the definitive guide to the leadership solutions sector click here to learn more about Hunt Scanlon’s just released ‘Adapting to Change: Trends In Talent Acquisition 2016‘

Check Out These Related Articles On U.K. Recruiting Trends:

Mike Hammond Resigns as CEO of Sheffield Haworth As U.K. Vote Nears, Uncertainty Looms Over Recruiting Sector Why Korn Ferry’s CEO Thinks We All Need to Adapt to Change