Menu
View our Events
Stay Connected:
The vast majority of Millennials see ongoing skills development as an important part of their future careers. They would pay for it personally and give up their own time to do it. But there are varying degrees of desire, capability and commitment to learning. Expert recruiter Smooch Reynolds takes us inside the current state of Millennial thinking. 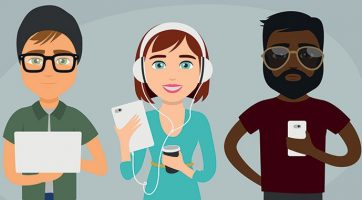 March 6, 2017 – Instead of climbing corporate ladders, Millennials are focused on learning technical and personal skills to ensure long-term career security as they seek to build a ‘career for me,’ according to a report released by ManpowerGroup.

Just 17 percent of American Millennials rank aspiring to leadership roles as a top career priority. This figure includes: managing others (four percent), getting to the top of an organization (four percent) and owning my own company (nine percent). All three ranked at the bottom of American Millennials’ list of career priorities in almost all 19 countries in the global research except Mexico, where their entrepreneurial drive put “owning my own company” at the top of the list (31 percent).

As technological innovation changes the way work gets done, career success is increasingly determined by a person’s learnability — the desire and ability to quickly grow and adapt one’s skill set to remain employable throughout their working life. According to the report, employers need to recognize and reward learnability and they need to nurture it to avoid losing out or lacking critical skills in their workforce.

The vast majority of Millennials — 93 percent — see ongoing skills development as an important part of their future careers. They would pay for it personally and give up their own time to do it. Only seven percent of Millennials have no interest in training. There are, however, varying degrees of desire, capability and commitment to learning. Higher learnability correlates strongly with career success — being more educated, better prepared for employment and higher paid. What’s more, people with high learnability tend to continue learning, so the benefits grow over time.

In this fourth podcast episode of our 10-part podcast series, ‘Working with Millennials,’ we feature another highly informative Q&A with Smooch Reynolds, DHR International’s global investor relations and communications practice group leader. According to Ms. Reynolds, instead of climbing corporate ladders, Millennials are focused on learning technical and personal skills to ensure long-term career security as they seek to build a ‘career for me.’ Listen Now.


“Millennials learn quickly and seek out intellectual stimulation. As a result, they view roles as a steppingstone because they want to be on a continuous learning path,” said DHR International global investor relations and communications group leader Smooch S. Reynolds, who has been an IR and communications functional search expert for more than two decades. “Millennials have unknowingly adopted the buzz that’s becoming what I describe as a ‘corporate athlete’ at a much younger stage in their careers than most, which is actually to the advantage of their employers.”

Two thirds of this generation are optimistic about their immediate job prospects. Sixty two percent are confident that if they lost their main source of income ‪tomorrow they could find equally good or better work within three months. Overall, Millennials in Mexico, China, Switzerland and Germany are the most positive, while those in Japan, Greece and Italy are the least positive — a reflection of economic, political and cultural factors in these countries. The majority of Millennials globally see a promising future and successful careers ahead.

Most Millennials know they’ll work longer than the generations before them. Globally, over half expect to work past age 65. Twenty seven percent expect to work over the age of 70, and 12 percent say they will likely work until the day they die. In Japan, that figure is more than a third. Still, a significant number remain optimistic that they will retire before 65. Only time will tell if this minority are the realists, optimists or just downright naïve.

“Millennials are still in the formative years of their careers, so I think they’re wise to building their portfolios still,” said Ms.  Reynolds. “They come hard-wired with innate intellectual curiosity, which definitely allows them to learn in real-time at a faster rate.”

Contrary to the lazy label, the data tell a different story. Millennials are working as hard, if not harder, than other generations. Seventy three percent report working more than 40 hours a week, and nearly a quarter work over 50 hours. Indian Millennials claim the longest working week and Australians the shortest – on average 52 and 41 hours a week, respectively. Twenty six percent globally are working two or more paid jobs.

Millennials expect to work harder and longer than previous generations, so they already anticipate more variety and more times when they will take their foot off the gas. Eighty four percent foresee significant breaks along the way, reinforcing that ‘career waves’ are replacing the ‘career ladder’ of earlier generations.

The reasons for these breaks are revealing. Women plan to take more time out to care for others – for children, older relatives, partners and even to volunteer. Men have different priorities. This does not bode well for hopes of gender parity, with both parents holding the baby. Where Millennials are more equal is in caring for themselves. Both genders aim to prioritize “me-me-me time” and leisure-related breaks. Regardless of gender, four in 10 Millennials are planning to take significant breaks for relaxation, travel or vacations. Taking time off to support a partner in their job ranks close to last place for both, reinforcing the trend towards dual-income households.

Millennials prioritize three things when choosing where and how they work: money, security and time off. They want to be rewarded for their effort, feel secure in their employment and still have the freedom to stop and refuel once in a while. They also value working with great people and enjoying the time they spend on the job, together with the opportunity to work flexibly and develop new skills as priorities.

Job security is critical for Millennials, but they define it differently. They are not the job hoppers some would have us believe. Given the chance, they will move on and move up, but more often than not they expect to advance with the same employer. Like the traditionalists before them, they want the security of full-time work to ensure they can maintain their standard of living.

Rather than one long job for life, Millennials understand the need for continuous skills development to remain employable. Ninety three percent want lifelong learning and are willing to spend their own time and / or money on further training. Four out of five say the opportunity to learn new skills is a top factor when considering a new job, and 22 percent intend to take an extended break from work to gain new skills and qualifications. This Millennial mindset sees individual jobs as stepping stones to self-improvement, rather than a final destination. Millennials have redefined job security as career security — it’s the journey not the job.

“Employers need to understand how Millennials view themselves,” said Ms. Reynolds, who estimated that she’s added more than $300 billion in valuation to client organizations through her IRO search work in the last 15 years. “One of the most powerful factors in any individual’s ability to be successful is their own self-perception, no matter what level of experience they have. Providing Millennials with a wide path of opportunities is critical. A key to Millennials’ success is their comfort and interest in diving into new roles, new content and new experiences.”

All the World Is a Gig, Not Really

Millennials want new opportunities with their current employer not the next — 63 percent intend to stay with their current employer for the next few years or longer. However, when asked what the “right” amount of time is to stay in a single role before being promoted or moving to another, about two thirds said less than two years and a quarter said less than 12 months — confirming their appetite for new challenges and portfolio-style jobs.

Recognition and affirmation are important. Half of Millennials would consider leaving their current job due to a lack of appreciation. Once they start to look elsewhere other issues like pay, benefits and lack of opportunities also become significant. Employers can nip this in the bud by offering more frequent, face-to-face feedback. Maintaining a high touch approach and finding new channels that encourage recognition and sharing from managers and peers is a low-cost, effective way to engage people in their roles.

Gig work might dominate the media, but almost three quarters of working Millennials are in full-time jobs. Even in the U.S., where alternative forms of employment — like Uber and TaskRabbit — emerge faster than anywhere, only three percent of Millennials work in the gig economy.

Millennials are happy to disrupt and be disrupted however. Though they favor full-time work, over half say they are open to non-traditional forms of employment in the future — freelance, gig work or portfolio careers with multiple jobs. Self-employment is also a tempting future option. Their comfort with disruption and openness to new ways of working may put pressure on employers to adopt more of the flexibility and varied work offered by alternative employment models.

Here are some suggested ways to work with Millennials, and to keep them interested, satisfied and a more long lasting part of your talent base:

“Millennials want employment security and are pursuing a ‘career for me’ to get it. They see traditional managerial paths as less appealing than learning technical and personal skills,” said Mara Swan, executive vice president, global strategy and talent at ManpowerGroup. “Loyalty is a two way street. To cultivate the next generation of leaders, employers need to show Millennials how taking on managerial roles aligns with their long-term career goals and will help make them more employable in the future.”

Check Out These Related Articles & Podcasts On Millennials:

How Millennials Will Shape Politics & the Workplace Millennials & Politics: Why the Youth Vote Matters Here Are Five Types of Millennials You Need to Know