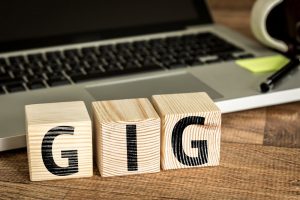 June 22, 2016 – Job seekers are hesitant to pursue the growing number of independent contractor opportunities with on-demand companies, such as driving for Uber or performing jobs through TaskRabbit, according to a new study released by career network Beyond.

The ‘gig’ economy is the new approach to business structure and employment. Traditionally, employees have a set schedule, received weekly / monthly salary and worked at their employer’s location. ‘Gigging’ is dismantling the bindings on work expectations and allowing employees to set their own hours, availability and deliverables.

The Beyond survey found that 68 percent of respondents indicated that they would not work for an on-demand company or would maybe consider it depending upon their financial situation at the time. The gig economy in the U.S. has grown rapidly in recent years, creating more independent contractor opportunities for workers. However, the survey results showed that the lack of legal rights and benefits for on-demand contractors are deterrents for job seekers.

According to the report, an overwhelming consensus of job seekers (79 percent) believe on-demand companies should consider their workers eligible for entitled legal rights and benefits under certain conditions, with 47 percent of respondents saying they deserve official employee status no matter what, and 32 percent saying they should be considered official employees if working more than 40 hours per week.

Why the Focus Remains On Full-Time Work

While job seekers think that the gig economy will endure, many respondents (66 percent) believe that people are concerned about leaving the traditional workforce to become independent contractors at on-demand companies due to lack of legal perks, benefits and financial security.

And this sentiment remained consistent when asked what they found to be “least appealing” about working for an on-demand company. Job seekers said no job security / guaranteed income (53 percent), no health benefits (28 percent) and that working certain jobs could be dangerous (12 percent). As the debate around workers’ rights in the gig economy continues, the survey revealed that workers, for the most part, remain resistant to embrace the gig economy in the absence of traditional job perks.

“While on-demand companies create unique opportunities, our survey clearly shows that the majority of job seekers would prefer to focus on a full-time job with benefits over a short-term job in the gig economy,” said Rich Milgram, chief executive officer of Beyond. “We all love the flexibility that the gig economy offers, but in reality we need the stability of a full-time position. Finding the right mix of the two is what we strive for in life.”

Respondents did highlight some positives to working as an independent contractor for an on-demand company. Job seekers said flexible work hours (52 percent), the ability to be their own boss (25 percent) and the exciting business model / earning potential (10 percent) were “most appealing” about these types of jobs.

Additional findings from the survey show:

In 2014, about 34 percent of the workforce was freelance or contract (non-employee) workers and by 2017-2018 it is expected that 50 percent or more will be contract or freelance, says recruiting firm Bohan & Bradstreet. In 2016, over 93 percent of businesses have temporary, contract or part-time employees and view the “new workforce” as a key element to developing and running a successful business.

On-demand companies are not the only ones using the services of temporary or contract related employees.