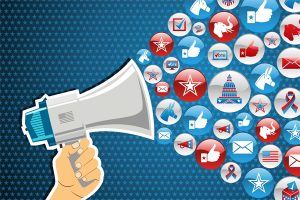 November 4, 2016 – Millennials and politics. What a hot topic just four days out from the general election. This demographic group is now as large a potential political force as Baby Boomers, poised to make up 25 percent of the vote on Tuesday, according to an analysis of U.S. census data from the Pew Research Center. By comparison, in the 2012 election, voters between the ages of 18-29 made up less than 20 percent of the electorate.

But any further comparisons might stop there. While the Millennial generation is forging a distinctive path into adulthood, they are, in fact, relatively unattached to organized politics, instead linked by social media, burdened by debt, distrustful of people, and optimistic about the future. Is it fair to lump everyone into this narrow ban? Of course not. But current research suggests these are some of the general insights into Millennial thinking and behavior that most do agree on, even Millennials themselves.

Pew Research Center surveys show that half of Millennials (50 percent) now describe themselves as political independents. These are at or near the highest levels of political and religious disaffiliation recorded for any generation in the quarter century that the Pew Research Center has been polling on these topics. (See Exhibit 1)

“This generation is informed predominately through the social media lens, good or bad,” said Smooch S. Reynolds, an executive recruiter with DHR International, and a Millennial prognosticator. “This generation has had little opportunity to set a foundation to develop critical and key criteria that feel right in order to contribute to being a productive part of this election.”

Why the Millennial Vote Matters

In this second podcast episode of ‘Talent Talks,’ DHR International’s global investor relations and communications practice group leader, Smooch S. Reynolds, is back to offer up some powerful insight. According to Ms. Reynolds, Millennials are poised to have a massive influence on the future of American government. But the key question she asks is will they stand up and get out the vote? Listen Now.

Pew Center research that Millennials stand out for voting heavily Democratic and for their liberal views on many political and social issues, ranging from a belief in an activist government to support for same-sex marriage and marijuana legalization. Not only do half of all Millennials choose not to identify with either political party, just 31 percent say there is a great deal of difference between the Republican and Democratic parties. (See Exhibit 2)

According to U.S. Census data, about a third of people under age 44 (the group for which data was presented) did not vote in the 2012 presidential election, with more than half of those ages 18-24 not voting. If voting in the 2016 election stays on that track, it will be the third election in which fewer younger people decided not to take part in the voting process. Ms. Reynolds said this might have to do with the political structure itself. “Millennials focus their energies where they can be productive in a quick and effective manner,” she noted. “In many ways, our political system simply doesn’t allow for that.” 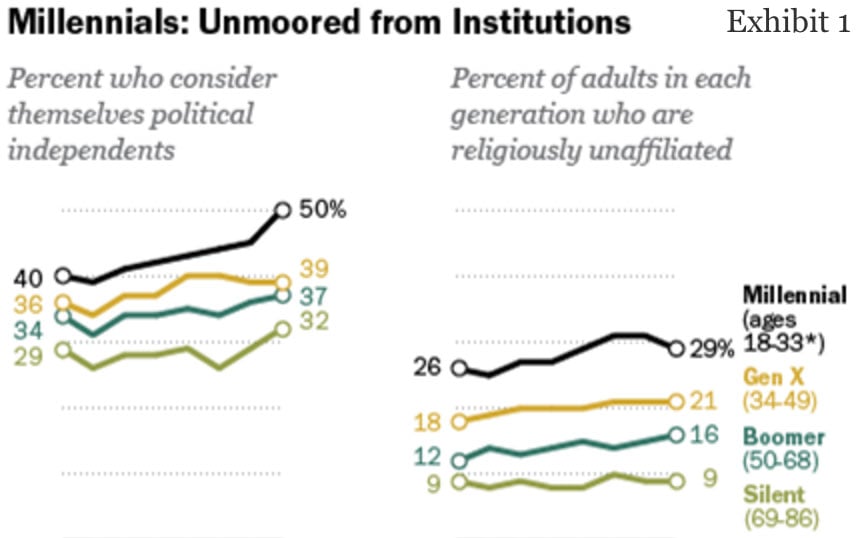 Even so, this generation stood out in the past two presidential elections as strikingly Democratic. According to national exit polls, the young-old partisan voting gaps in the last elections of 2008 and 2012 were among the largest in the modern era, with Millennials far more supportive than older generations of Barack Obama. As President Obama’s approval ratings have declined in recent years, however, Millennials have joined older adults in lowering their assessments of him. (See Exhibit 3)

Yet Millennials continue to view the Democratic Party more favorably than the Republican Party. And Millennials today are still the only generation in which liberals are not significantly outnumbered by conservatives.

Again, Ms. Reynolds weighs in. “As Millennials grow older and gain some heft in terms of wisdom through their life experiences and through work experiences, who knows where they’re going to net out politically. My guess is they will try to align themselves with whichever party seems to present concrete, effective answers to societal challenges.” Regardless, she said, they will always focus on the ethics of the candidate pool. “This is even more of a reason for Millennials to get out the vote.”

Millennials by Age and Race

As is the case within any generation, Millennials are not all alike. They are a diverse group with a myriad of views on many of the important issues of their time. And some political analysts have suggested that older and younger Millennials may differ in terms of their political views and party allegiances. 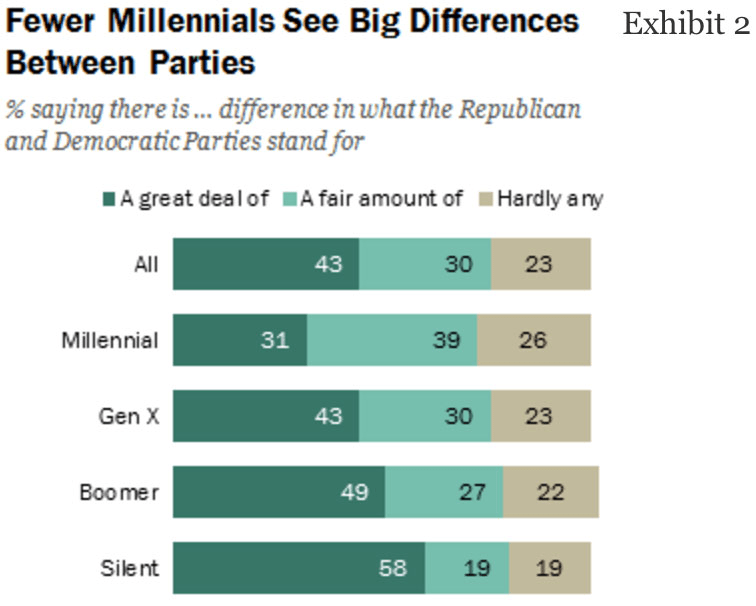 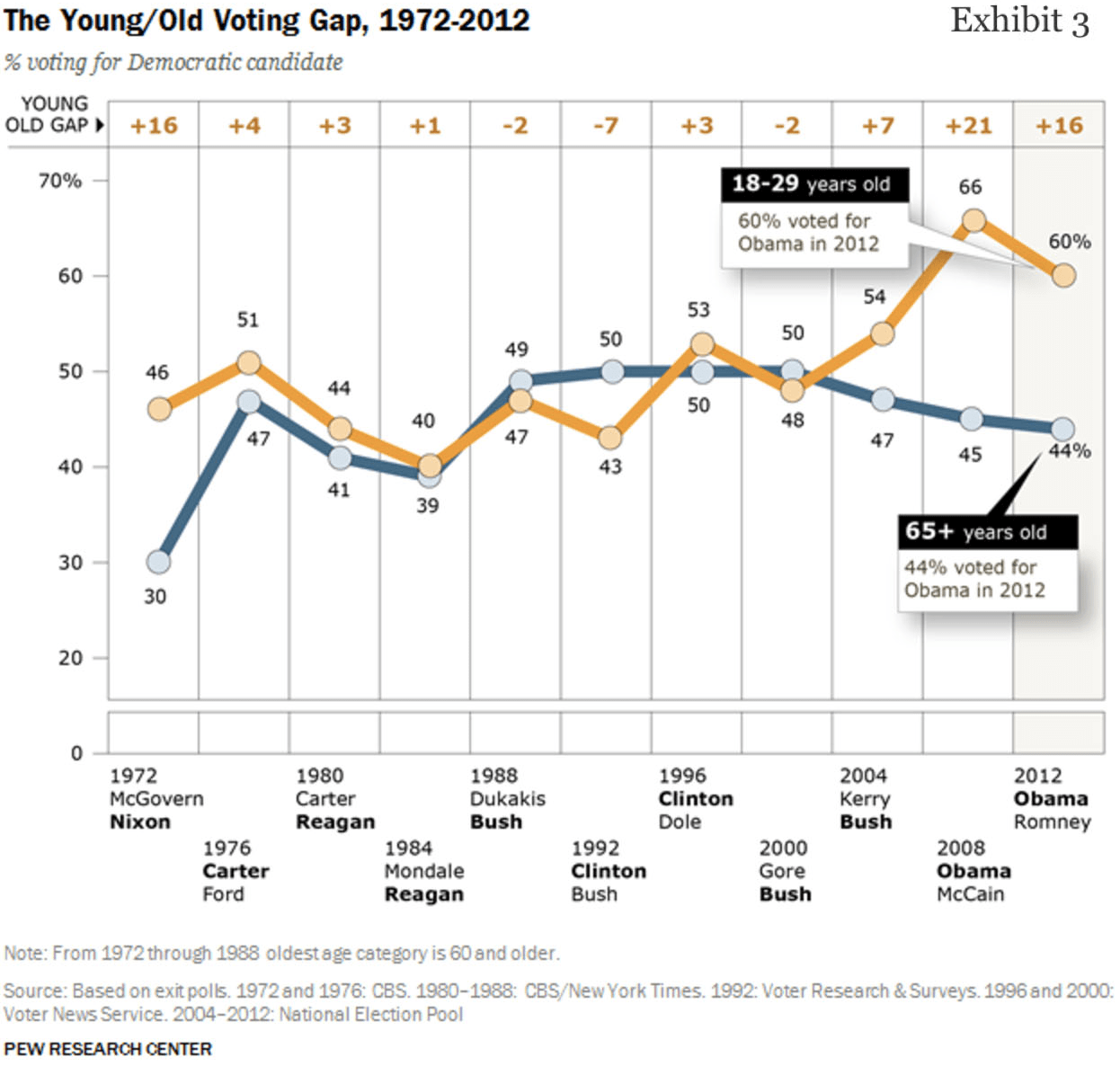 Perhaps influencing Millennials’ political views is the fact that they are the first generation in the modern era to have higher levels of student loan debt, poverty and unemployment, and lower levels of wealth and personal income than their two immediate predecessor generations (Gen Xers and Baby Boomers) had at the same stage of their life cycles.

Their difficult economic circumstances in part reflect the impact of the Great Recession (2007-2009) and in part the longer-term effects of globalization and rapid technological change on the American workforce. Median household income in the U.S. today remains below its 1999 peak, the longest stretch of stagnation in the modern era, and during that time income and wealth gaps have widened.

Not surprisingly, the new Pew Research survey finds that about seven-in-10 Americans, spanning all generations, say that today’s young adults face more economic challenges than their elders did when they were first starting out. This might be why Ms. Reynolds said that Millennials “distill conflicts and situations own to simple solutions.”

At the same time, fully a third of older Millennials (ages 26 to 33) have a four-year college degree or more —making them the best-educated cohort of young adults in American history. In an increasingly knowledge-based economy, young adults today who do not advance beyond high school have been paying a much stiffer penalty — in terms of low wages and high unemployment —than their counterparts did one and two generations ago.

Despite their financial burdens, Millennials are the nation’s most stubborn economic optimists. More than eight-in-10 say they either currently have enough money to lead the lives they want (32 percent) or expect to in the future (53 percent). No other group of adults is nearly as confident, though when Gen Xers were the age Millennials are now, they were equally upbeat about their own economic futures.

The confidence of Millennials in their long-term economic prospects is even more notable in light of another finding from the Pew Research survey: Fully half of Millennials (51 percent) say they do not believe there will be any money for them in the Social Security system by the time they are ready to retire, and an additional 39 percent say the system will only be able to provide them with retirement benefits at reduced levels. Just six percent expect to receive Social Security benefits at levels enjoyed by current retirees.

About six-in-10 Millennials (61 percent) oppose benefit cuts as a way to address the long-term funding problems of Social Security, a view held by about seven-in-10 older adults. There is a much bigger generation gap, however, on the question of whether government should give higher priority to programs that benefit the young or the old. About half (53 percent) of Millennials say the young, compared with 36 percent of Gen Xers and just 28 percent each of Baby Boomers. All of these beliefs could create a political force if the Millennials can rally and show up ‪next Tuesday morning, said Ms. Reynolds.

In response to a battery of questions in the Pew Research survey about how they think of themselves, Millennials are much less inclined than older adults to self-identify as patriotic.

For example, only about half (49 percent) of Millennials say the phrase “a patriotic person” describes them very well — with 35 percent saying this is a “perfect” description. By contrast, 64 percent of Gen Xers, 75 percent of Baby Boomers say this describes them very well. This gap may be due more to their age and stage in life than a characteristic of their generation. When Gen Xers were young, they too lagged behind their elders on this measure in a similarly worded question.

What Is Important to Millennials In This Election

The Millennial Impact Report, created by research firm Achieve and the Case Foundation, has drawn some important conclusions about how Millennials are responding to the presidential race, and what their attitudes say about their philanthropic motivations.

Here are five top trends that the report found:

In light of the ugly behavior demonstrated by both party leaders contending for the highest office in the land four days from today, Ms. Reynolds said that one of the most powerful ways the Millennial generation could positively influence the future of our government is to keep the pressure on as it relates to simplifying messages and therefore solutions, right up until the final day before the election. “Millennials need and deserve to have their voice heard,” she said. “We all need them now to step into the political arena and shake it up a bit!”

To connect with me directly, please email: scott@huntscanlon.com

Check Out These Related Articles On Millennials:

Here Are Five Types of Millennials You Need to Know In a Three Generational Workforce, Baby Boomers Provide the Backbone Millennials Cite Impact As Critical Factor In Choosing Next Job What Companies Are Looking for In Younger Workers Struggling to Hire Millennials? Here's How to Get Them Onboard 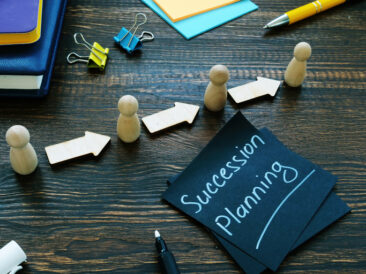 How Succession Planning Can be Your Secret Weapon 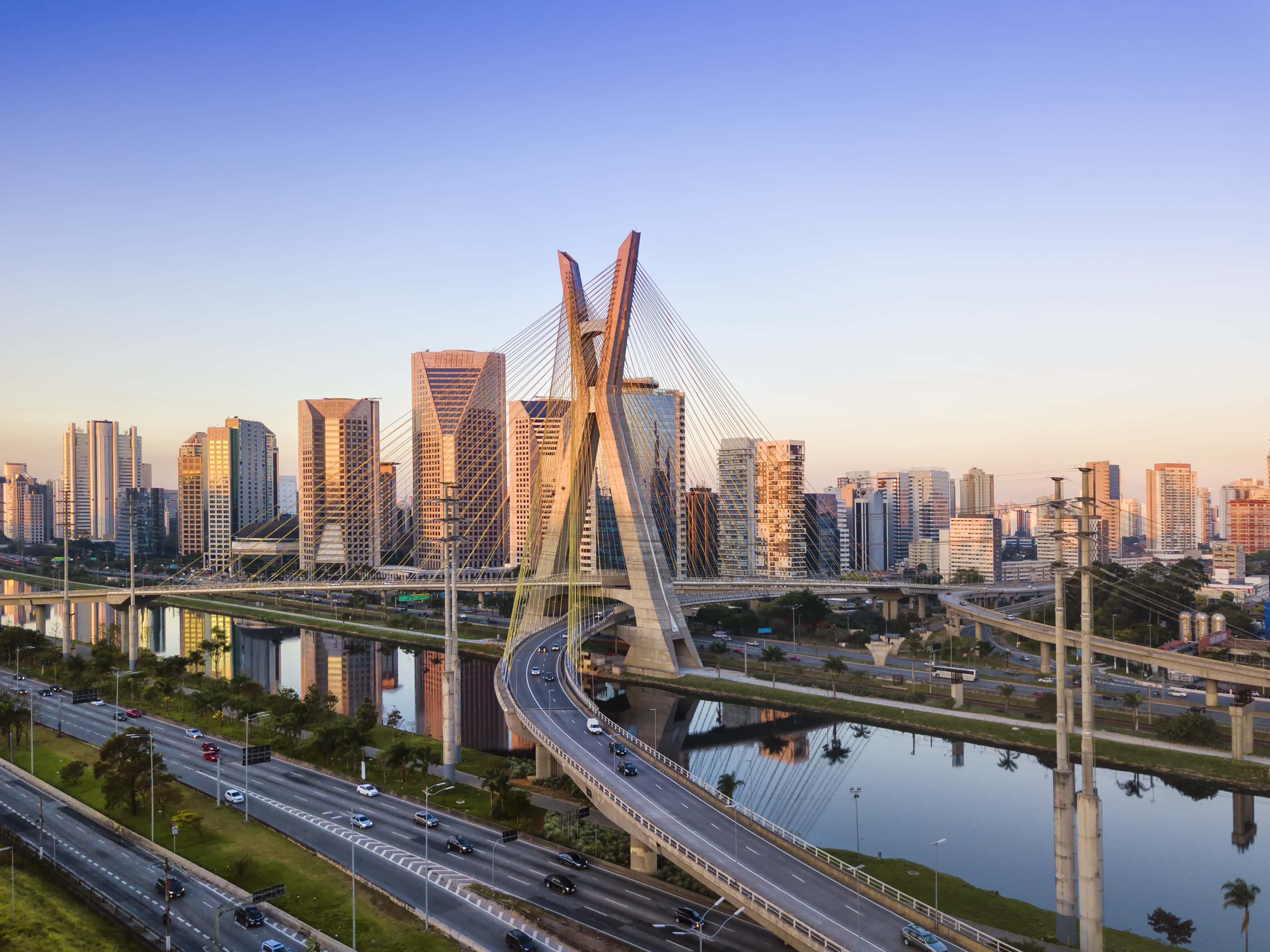