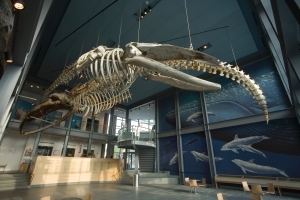 “With a strong record of leadership and accomplishments, Amanda is poised to contribute to the current momentum and growth within the region’s arts and culture community,” said Carol M. Taylor, trustees chair for the museum. “The board is confident that Ms. McMullen will enhance the museum’s impact and advance its mission and strategic priorities.”

Anthony Sapienza, the trustees’ first vice chair and chair of the executive search committee, described Ms. McMullen is an accomplished leader. “In addition to having a strong leadership track record, she is innovative, creative and skilled when it comes to building partnerships, and identifying and developing new opportunities,” he said.

With more than 20 years of experience working with non-profits in senior management and fundraising positions, Ms. McMullen currently serves as chief operating officer of Meeting Street, where she oversees programming, operations, marketing and philanthropic activities. She has also directed corporate sponsorship activities for the Smithsonian Institution’s Traveling Exhibitions and was the director of leadership giving for the United Way of Massachusetts Bay. Ms. McMullen also served as the capital campaign coordinator for the Isabella Stewart Gardner Museum in Boston.

In her new position, Ms. McMullen will be charged with developing and articulating a vision for the Bedford Whaling Museum’s next chapter and will assume responsibility for communicating the museum’s mission, vision and values to all constituencies. She will report directly to the board of trustees and is expected to work to ensure the continued position of the museum as the landmark cultural organization in the region and the preeminent whaling-era resource in the country.

The New Bedford Whaling Museum focuses on the history of the international whaling industry and the “Old Dartmouth” region in the south coast of Massachusetts. It was established in 1907.

Boston-based Koya Leadership Partners is a national executive search and human capital consulting firm that works exclusively with non-profits and social enterprises. This year, the firm was again recognized by Hunt Scanlon Media as one of the top 50 search firms in the Americas.

Koya has developed a national reputation for identifying executive directors and CEOs across the non-profit sector, including those for Hudson Webber Foundation, the Ralph C. Wilson Jr. Foundation, Girl Scouts in the Heart of Pennsylvania, American Red Cross of Chicago & Northern Illinois, Glazer Children’s Museum and Tourette Association of America, among many others.

Ms. McCarthy, who holds the title of principal, specializes in recruiting senior executives to non-profit organizations, cultural institutions and foundations across the country. She previously worked for another retained executive search firm and specialized in assignments for clients in the insurance and industrial manufacturing industries.

Ms. Reedy, who serves as vice president of executive search, focuses on conducting social enterprise searches for leading mission-driven clients. With a background in community development finance and a strong search background, she has led searches for the William and Flora Hewlett Foundation, IFF and Buck Institute for Education, among others.

Koya has been busy in recently months placing leaders at a variety of non-profit organizations. Here is a sampling of the firm’s recent search work from the Hunt Scanlon Media archives:

Following a national search, Koya placed Angela F. Williams as its new president and CEO of Easterseals. The former YMCA executive is expected to lead the organization into its centennial year in 2019. Alison Ranney, managing director who heads Koya’s Chicago office, co-led the assignment with Ms. McCarthy.