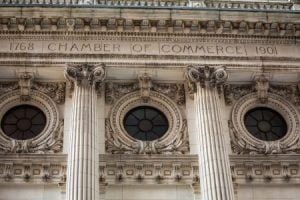 September 6, 2017 – Brent Cooper, an entrepreneur, small business owner and longtime leader in the regional business community, has been named president and CEO of the Northern Kentucky Chamber of Commerce.

The opening attracted a national talent pool of business leaders and other executives. Centennial president Mike Sipple Jr. said the chamber’s executive search committee was looking for candidates well versed in how to lead, connect and advocate.

The committee, said Mr. Sipple, was impressed by Mr. Cooper’s proven leadership skills and ability to build and guide high performing teams; his ability to see, communicate and develop a vision; his network of regional, state and national relationships; and his knowledge and understanding of complex issues facing the business community.

“Brent’s leadership, passion, business growth and an entrepreneur’s spirit was the right match for one of our region’s premier business-building organizations,” Mr. Sipple said. “Brent also brings a tremendous regional and statewide perspective to the conversation of one of the hottest marketplaces in the country.”

Kevin Canafax, vice president of public affairs for Fidelity Investments and a member of the executive search committee, said Mr. Cooper will be a boon to the chamber, and the business community. “Brent Cooper’s selection as president presents a wealth of opportunity for this region given his proven business acumen, and grasp of complex issues,” he said. “As a member of the Cincinnati chamber board and past chairman of the Kentucky chamber, I witnessed first-hand Brent’s effusive passion for our region and the commonwealth. Brent has never met a stranger.”

Over the years, Mr. Cooper has served on various chamber committees. He is an alumnus of Leadership Northern Kentucky and has been active on numerous education, philanthropic and civic boards. As a businessman, he also knows firsthand the value of the chamber’s resources, mentoring, education opportunities and more in growing a successful enterprise.

Incoming chamber chairwoman Rhonda Whitaker, director of government and community relations for Duke Energy Kentucky, said Mr. Cooper’s experience with the chamber, in the community and in growing his business made a big impression on the committee.

“I’ve had the great pleasure of working with Brent Cooper on various community boards and chamber committees for years, and have always been impressed with his energy and passion for Northern Kentucky and the entire Greater Cincinnati region,” Ms. Whitaker said. “Brent’s unique skill-set is highly relatable to chamber members and staff. Brent started an IT company from scratch, and now it is one of the most successful technology companies in the region. He can not only relate to our business community, but he can show the value of our chamber and how it can help other businesses prosper.”

The Northern Kentucky Chamber of Commerce, founded in 1969, is the leading business organization in Northern Kentucky. It is a five-star accredited chamber with nearly 1,500 member companies representing about 175,000 employees. The chamber’s focus is on education, workforce development, international trade, leadership development and government relations at all levels.

Founded in 1975, Centennial provides executive search services to the consumer packaged goods, manufacturing, supply chain, non-profit and services industries. The firm has recruited leaders for all aspects of a number of functions, including accounting and finance brand management, consumer insights, digital and e-commerce and marketing, business development and sales, C-suite leadership, engineering and research and development, human resources and information technology.

The Chason Group placed Sarah H. McKinney as president and CEO of the Athens Area Community Foundation. Tim Chason, the firm’s president, led the assignment. Ms. McKinney previously was the director of development for the Georgia 4-H Foundation based at the University of Georgia in Athens. Prior to her move to Georgia 4-H, she was director of development and volunteer Services for the Athens Community Council on Aging.