Stay Connected:
More hiring managers are using social media and Internet searches to screen candidates, a new survey has found. Experts suggest that the best response to ‘social recruiting’ is to cultivate a positive online persona. Here’s how. 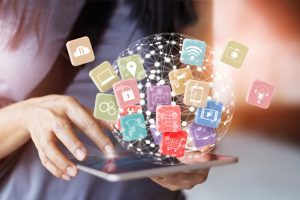 August 9, 2017 – A growing number of employers are using social media and Internet searches to screen candidates before hiring, according to a recent poll. But that doesn’t mean job seekers should abandon their Facebook and Instagram accounts. Many of those doing the hiring, in fact, consider it a deal breaker if a prospect has no online presence, the survey concluded.

Seventy percent of employers said they screen candidates by checking their social media postings, a jump from 60 percent last year, and 11 percent in 2006, said the CareerBuilder report. And 69 percent said they use search engines to learn about applicants, up from 59 percent in 2016. Still, 57 percent of employers also said that if they can find nothing about a candidate online they are less likely to grant that person an interview.

“Most workers have some sort of online presence today – and more than half of employers won’t hire those without one,” said Rosemary Haefner, chief human resources officer (CHRO) at CareerBuilder, the Chicago-based human capital solutions company. “This shows the importance of cultivating a positive online persona. Job seekers should make their professional profiles visible online and ensure any information that could negatively impact their job search is made private or removed.”

For many human resource functions, social recruiting is an integral part of their operation, with 30 percent of those surveyed assigning someone to perform such checking. Employers want to know about job seekers beyond their basic resume. Respondents told CareerBuilder that the kind of information they are seeking includes: evidence of the individual’s qualifications for the job (61 percent), whether the candidate has a professional online persona (50 percent), what others have posted about the candidate (37 percent), and a reason not to hire the candidate (24 percent).

Oftentimes, they are finding just that: Fifty-four percent of the employers surveyed said that they bypassed a prospect because of what they learned about them through social media.

Angee Linsey, managing director at Linsey Careers, a marketing and communications recruitment firm based in Seattle, said it is common for her clients to peruse the social media presence of candidates before meeting them. Likewise, her firm will scan the web before presenting an individual. “Simply because social media has really exploded in the last few years, I think all candidates should expect that what they make public will be part of the overall review when interviewing for a job,” Ms. Linsey said.

“I definitely think there is value in doing a quick check when looking at a candidate. If the candidate has public positions on things that may conflict with your organization or your company’s values, then it’s important to know that,” she added. “If you can find it, so can the company’s customers. Depending on the type of position you are recruiting for, you want to be sure there isn’t unnecessary scandal or culture clashes.”

Ms. Linsey tells of one instance in which she was about to present a candidate for an executive communications position for a prominent CEO. “A quick look at his Twitter feed and there were a number of controversial and inappropriate posts that are fine for him to express personally, but given the position of the executive, the posts could literally cause media attention if he were associated directly to our client company,” she said.

“Some would argue that it’s personal time and their personal opinion, and that’s true. But it’s a public forum. At the levels, and the types of positions, that I recruit for, public scrutiny will happen. So, make sure your social media platforms represent you in the way that you can be proud of,” she added.

Ms. Linsey agrees that candidates should have at least some online presence. If nothing else, it reveals something about the individual’s activity out in the world, beyond the bare-bone facts. That such information should reinforce a positive image seems obvious, though countless job seekers have failed to grasp that very idea.

“You don’t need to fill the first five Google pages when doing a search on your name, but a well-crafted LinkedIn page is a minimum standard. Because I recruit marketing and communications people, I’m going to look for more beyond LinkedIn. ‘Is this person a thought leader? Do they use social media strategically?’ Often people who create the social strategies for a company are less likely to be super active on it personally, and I get that. But what I do see, should reflect well on the person.”

Hilary Eaton Pearl, founding partner of Pearl Associates LLC, an executive coaching and consulting firm in Greenwich, Conn., said that most of her clients use LinkedIn profiles to source and assess the viability of candidates. “LinkedIn provides another way to understand a candidate’s background, such as their connections, testimonials, groups, etc.,” she explained. “That said, all candidates using LinkedIn profiles should make sure their profile is thorough and well-matched to their resumes. Many forget to keep their profile updated to the current job or leave out important details.”

“Facebook and Twitter seem to be used by line managers who have seen a candidate’s resume, and therefore are well-briefed on his or her work accomplishments, but feel as if they are missing important information about the candidate beyond work,” she said. “In order to get a more holistic view of the candidate, they will check these secondary sources to determine culture and value fit.”

More Companies Using Social Media to Reject Job Candidates
More than one-third of companies have disqualified a job candidate in the past year because of concerns about information found on public social media or an online search, according to survey results by the Society for Human Resource Management. Candidates were disqualified for illegal activity, discrepancies with job applications, and more.

Ms. Pearl said that one’s postings on social media sites can pose unexpected problems for job seekers. Clearly, untoward postings are going to be looked upon with disfavor. But sometimes even the nature of certain posts can torpedo one’s chance at a particular job. “The risk for candidates is that the content on Facebook or Twitter may tip the hiring manager’s view against them,” she said. “For example, managers and recruiters shy away from candidates who post negative things about prior bosses or employees.”

What’s more, some hiring managers might take exception to opinions or tendencies that one might reveal online. That can potentially dim a candidate’s chances of landing the job, whether the employer intentionally makes the connection or not.

“Another risk for candidates is the potential for unconscious bias on the employer’s part, especially when there is a lack of clarity about what the manager or recruiter is looking for,” said Ms. Pearl. “If a manager is unclear on whether they are interested in a candidate and decide to visit the person’s Facebook account, they are more likely to make a negative assumption about the person based on limited information. For example, in today’s highly polarized culture, managers might very well be biased against someone who actively opposes their political or social views. This could result in the employer either not taking the process further or being influenced by unconscious bias during an interview.”

“There is no question,” she concluded, “that a candidate may not be pursued because of what employers find on social media.”