Menu
View our Events
Stay Connected:
Employers are reporting the strongest second quarter hiring outlook in eight years. Nearly a quarter of them plan to draft staff this spring. Let's go inside the latest upbeat forecast and hear viewpoints from several executive recruiters. 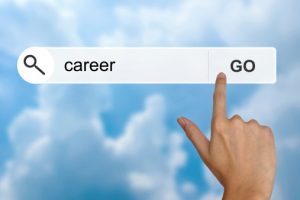 March 14, 2017 – U.S. employers expect the pace of hiring to pick up in the second quarter, with nearly 25 percent planning to add staff between April and June. According to the latest ‘Employment Outlook Survey,’ released today by ManpowerGroup, employers in all U.S. regions and industry sectors expect headcount to grow. The upbeat forecast indicates  the continued uncertain political climate is having little effect on employer confidence.

When compared with the first quarter, hiring intentions across the U.S. are considerably stronger in the mining sector. Employers in two other sectors report slightly stronger hiring prospects: Nondurable goods manufacturing and professional & business services.

“U.S. employers have a positive outlook for the coming quarter as the country waits to understand how the new administration’s policies will come into effect,” said Michael Stull, senior vice president, Manpower North America.

Employers in 21 percent of the Midwest businesses surveyed expect to increase staffing levels during the second quarter, while three percent expect a decline in payrolls. The resulting net employment outlook is +18 percent. Once the data is adjusted to allow for seasonal variation, hiring prospects in the region remain relatively stable both quarter-over-quarter and year-over-year.

Payroll growth is expected by 21 percent of Northeast employers during the second quarter, while four percent anticipate a decline in staffing levels. The resulting net employment outlook for the coming quarter is +17 percent. Once the figures are adjusted to allow for seasonal variation, hiring prospects in the Northeast region are slightly weaker when compared with the previous quarter but remain unchanged year-over-year.

Employers in 21 percent of the businesses surveyed in the South expect to grow payrolls in the April to June timeframe. Meanwhile, three percent of employers in the region anticipate a decline in staffing levels, resulting in a net employment outlook  of +18 percent. Once the data is adjusted to allow for seasonal variation, hiring intentions remain relatively stable compared with the previous quarter and are unchanged year-over-year.

A considerably stronger labor market is anticipated by employers in the professional & business services industry sector in the South, when compared with the first quarter. Elsewhere, slightly stronger hiring plans are reported in both the construction and other services sectors.

Staffing levels are expected to increase during the second quarter in 23 percent of the businesses surveyed in the West. However, three percent of employers in the region anticipate a decrease in payrolls. As a result, the net employment outlook stands at +20 percent. Once the figures are adjusted to remove seasonal variation, hiring intentions are unchanged when compared with the previous quarter and are slightly stronger when compared with this time a year ago. 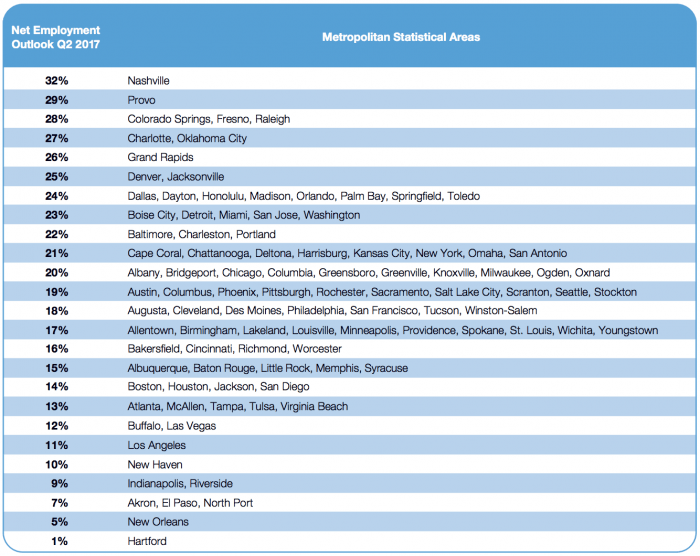 ManpowerGroup interviewed over 58,000 employers across 43 countries and territories to forecast labor market activity in the second quarter. All participants were asked, “How do you anticipate total employment at your location to change in the three months to the end of June 2017 as compared to the current quarter?”

The research indicates that employers in 39 of 43 countries and territories intend to add to their payrolls by varying degrees in the April to June timeframe. Overall, opportunities for job seekers are expected to remain similar to those available in the first three months of 2017, with employers in most countries and territories signaling that they are content to either maintain current staffing levels or engage in modest levels of payroll growth while they monitor ongoing developments in the marketplace.

Hiring plans improve in 17 of 43 countries and territories when compared quarter-over-quarter, decline in 15, and are unchanged in 11. The year-over-year trend reveals a more pronounced uptick with outlooks strengthening in 25 countries and territories, weakening in 14, and remaining unchanged in three. Second quarter hiring confidence is strongest in Taiwan, Japan, Slovenia and India. The weakest forecasts are reported in Brazil, Italy, Belgium and Switzerland.

Staffing levels are expected to grow in 22 of 25 countries in the Europe, Middle East & Africa (EMEA) region. Outlooks improve in 12 countries quarter-over-quarter, weaken in six and are unchanged in seven. In a year-over-year comparison, outlooks improve in 18 countries and decline in only six. Job seekers in Slovenia, Hungary and Romania stand to benefit from the strongest employer hiring plans in the EMEA region. Additionally, employers in Slovenia, as well as their counterparts in Bulgaria, report their most optimistic hiring plans since their surveys were launched. The weakest forecasts are reported in Italy, Belgium and Switzerland.

Positive outlooks are reported in nine of the 10 countries surveyed in the Americas. Hiring confidence strengthens in four countries and declines in six when compared to the first three months of 2017. Year-over-year, hiring prospects improve in three countries, weaken in four and are unchanged in three. For the third consecutive quarter employers in the U.S. report the strongest hiring plans in the Americas, and for the ninth consecutive quarter employers in Brazil report the weakest.

Andy Knox, managing director of Chelsea Partners, a Los Angeles-based search firm, said there is no denying the general optimism in the job market. Whether it continues will depend on whether the Trump administration and Republican lawmakers can convert rhetoric to legislation.

“Cautious optimism is the term I’d use,” he said. “Substantial reductions in corporate tax rates; reduced regulation of all sorts; the return of manufacturing and other corporate activities back to the United States; and a massive infrastructure investment package. Hope for all of these is what is what is driving much of the current economic optimism.”

There is the expectation that we will also see substantial reductions in corporate and individual tax rates as part coming comprehensive tax reform, said Mr. Knox. “Corporations will be able to repatriate some $3 billion in offshore profits, allowing them to fast track investment spending in the U.S.,” he added. Additionally, he said, there would be meaningful reduction in regulation, and one trillion dollars of infrastructure spending.

Will it all happen? Mr. Knox said a good indicator might well be how repeal of the Affordable Care Act plays out. “I certainly don’t have a crystal ball,” he said, “but I think this is going to sort itself out and we’ll have a better sense for this before the summer. It will be very contentious. It could be a leading indicator of what the rest of this year looks like for a whole lot of things legislatively. Do we get healthcare reform? What does that look like? Do we get tax reform? How much?”

For his generalist firm, financial services has been active. Private companies, and family companies, have been doing well. Chelsea Partners has seen a lot of board work and governance assignments. High tech and biotech are doing well also, said Mr. Knox.

Continued consolidation across industry sectors and anemic rates of growth, to name two, could put a lot of stress on the employment market. The search industry, however, is thriving. But that doesn’t mean there are no dangers afoot. “I think we’re going to continue to see growth, although the rate of growth of the search industry is unclear,” said Mr. Knox. “The business is definitely experiencing a tailwind and may it continue. Working at the top levels, I think that will continue. But the underlying dynamics remain. And I don’t think they can be ignored.”

Sheila Greco, founder of SGA Talent, in Amsterdam, NY, said that for her firm, the first quarter of 2017 has been strong and that she and her clients are optimistic about the months ahead. “We play heavily in professional services, which is through the roof,” she said. “We also play in the retail sector, which is okay.” The insurance sector has been very big, she added, and obviously the healthcare sector is strong.

“I know from a small business perspective, we see this as being a very positive time. A lot of times people put their hiring on pause in an election year to see what happens with the outcome. Now that it’s over a number of our clients have just said, ‘You know what? We paused it for a while and now we’re going full bore. We need talent.’”

In some regards, she also pointed out, candidates have a stronger hand in choosing where they want to work. That’s creating some turnover, she said. And it’s also forcing companies to make hiring decisions more quickly. “It’s hard to find skilled talent,” she said. For companies of all sizes, from startups to Fortune 100s, people are their greatest asset, so they have to make sure they’re getting the skilled talent before the competition does.

“In some instances some of our clients are saying they want to keep the talent pipeline moving forward as opposed to just waiting until an opening occurs. And we have others that are saying, ‘Here’s the current opening I have and we have to hire people fast.’ Hiring managers do have to make hiring decisions faster than ever before because candidates do have options now as opposed to a couple years ago.”