Stay Connected:
In a groundbreaking study, the Korn Ferry Institute reveals what it took for women CEOs to rise to the summit at some of the biggest companies in America. A sense of purpose, courage, resilience and even humility all played a part. Let’s take a closer look. 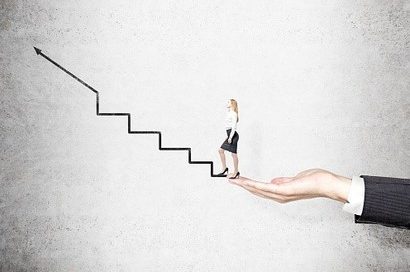 May 3, 2018 – Two-thirds (65 percent) of the 57 leading women CEOs interviewed and assessed for a new Korn Ferry Institute study had no idea they could become the head of their company until a boss or mentor encouraged them. Before that, they gave less attention to moving their career forward and more to meeting business targets and seeking new challenges.

The report, “Women CEOs Speak,” produced with the support of the Rockefeller Foundation, delves into the qualities that led 38 current and 19 former female CEOs of Fortune 1000 and similar-sized companies into some of the most prestigious roles in corporate America.

“Five women always wanted to be CEO,” said the report by Korn Ferry’s research and analytics arm. “Three never wanted to be CEO, and took the job out of a sense of responsibility. But the majority of the women we interviewed? They had not thought about being CEO at all – until someone told them they had the talent.”

Sometimes this revelation came early on, during a promotion or a talk with a mentor. Sometimes it arrived surprisingly late in one’s career, after already entering the CEO succession process. Four had outside mentors late in their careers who forcefully told them to ‘go for it.’ In eight cases, women said they didn’t realize they wanted to be CEO until the job was offered to them.

None of this was for lack of talent. It had more to do with how the women had come to see themselves. “These women knew that they were terrific executives, but most had a common blind spot,” said the report. “They didn’t envision themselves as the chief executive.”

Of the 57 female CEOs interviewed, 41 were from Fortune 1000 companies and another 16 worked for large, privately-held businesses. Korn Ferry’s researchers analyzed structured interviews with the women as well as the results of psychometric assessments that two-thirds agreed to participate in.

Besides the 65 percent who only came into the job after encouragement, 16 percent came to the realization that they could be CEO after reaching a high role; 12 percent had wanted the job for some time; and seven percent never actually wanted the job, said the report.

A Sense of Purpose

The women chief executives were on average four years older than male CEOs. For women, the starting average age was 50.9 vs. 46.8 for their male counterparts. The women also tended to work in slightly more roles, functions, companies and industries on the road to the top, said Korn Ferry.

Two-thirds (68 percent) of the women CEOs said they were driven to succeed by a sense of purpose and belief in the potential for their company to be a positive influence on the community, employees and the world around them.

“Purpose and mission were central to their message as leaders,” said the report. “Working to create a more positive culture was a primary way these women carried out purpose and mission in their companies. In 23 percent of the interviews, CEOs indicated that creating a positive culture was one of their most important accomplishments. Exactly how that was defined varied, from instilling operational discipline to creating a culture of honesty and openness, to improving how fairly and equitably workers are treated.”

Courage, risk-taking, resilience, agility and managing ambiguity were among the traits that repeatedly emerged in the women leaders. “More women need to take on tough and unpredictable job assignments that will build these characteristics,” suggested Korn Ferry.

The women CEOs were more likely to leverage others to achieve results, said the study. In their assessments, they showed no lack of confidence. But in terms of humility, they scored much higher than the benchmark group. “These women are very willing to give credit to people and situations that contributed to their success,” said the report. “This came through in the interview findings, too. The female CEOs repeatedly made note of people who’d helped and supported them. This combination of traits would suggest a leader who values the contributions of others, and moreover concedes that she can’t single-handedly bend the future to her will. This, frankly, might be more attuned to the reality of running today’s large enterprises.”

In what Korn Ferry characterized as “an intriguing twist,” the women CEOs scored at the mean but short of the benchmark in the area of “credibility” in their assessments. “Credibility is generally shorthand for delivering on your word, but in our assessment it also captures something better described as dutifulness or ‘Good

Soldier’ behavior,” said the report. “It seems understandable, and interviews confirmed, that for these women to rise to CEO, they probably didn’t always do what was expected.”

Another key factor in the success of the women CEOs was their educational background. Upwards of 40 percent of the female leaders had undergraduate degrees in science, math or engineering, which was similar to the rate for male CEOs. Nineteen percent studied business, economics or finance. And 21 percent majored in the arts and humanities. Sixteen percent had law degrees. With many of the women having attended college in the 1970s and ‘80s, they likely would have been in a minority in many such classes, Korn Ferry noted.

“Generally speaking, the women CEOs were not at all cynical about the corporate world they entered,” said the report. “Their traits scores and interviews both indicated that they are highly optimistic, trusting, sociable and empathetic. The interviews underscored how much emphasis these women placed on being authentic and remaining true to themselves. Compromising on their values – or on their vision – is not in their makeup, even if it would mean turning down some opportunities for advancement. Some said they didn’t feel they could give their all to a goal, strategy or company that they didn’t believe in.”

Achievement was a major driver for the women CEOs in overcoming roadblocks to success. They scored very high, in the 79th percentile, in achievement as a motivator, indicating that the women tend to seek out challenging work assignments, said the report. At the same time, however, they scored low, in the 24th percentile, in structure, which the study defined as a desire for stability and predictability in their work. “Taken together, these scores suggest these women are an extreme case – deeply unmotivated by predictable jobs, and highly desirous of variety and a chance to tackle new problems,” said the report.

The study found no single, step-by-step route to the top of the corporate ladder for women, but Korn Ferry regarded that as a positive in that it leaves the door open to many possible pathways. “The ultimate upside: a bigger pool of potential leaders,” said the report.

The firm did, however, highlight two main components from the women they studied for building a career. First, women should establish credibility in an area of expertise and build a reputation for performance or results. “This reputation opens doors to more complex opportunities and attracts early mentors,” said the report. “A strong foundation is based on expertise that produces objectively measurable results, and is close to the core of the business (e.g., underwriting for insurance; manufacturing for automotive; store management for retail).”

Many do this through their STEM, business or law backgrounds. “Others found launching pads from other areas with quantifiable outcomes, including sales and entrepreneurship,” said the report.

A Pivot to Leadership

“Building technical expertise is a springboard for delivering results and earning the respect of peers and supervisors,” said the study. “When the area of expertise comes with easy-to-measure outcomes, strong results are hard to ignore when promotion decisions are being made. This gets the women recognized and has the potential to wash out some of the unconscious gender bias in talent decisions.”

The second stage is to broaden one’s experience, thereby pivoting from expert to leader. This can happen as early as a woman’s mid-20s, or later, when the woman is much closer to the C-suite. “Her job now is to bring out the best in the people around and under her, to collaborate and to support and develop the people around her,” said the report. “This is when the leader begins to develop the attitudes, values, and skills that support the culture she will create as a CEO.”

“Some leaders deliberately enhance this learning by taking turns in HR, communications, or marketing. A global or international role pushes this development even further, as the leader learns to deal with different business cultures and their unique ways of working and of communicating,” concluded the Korn Ferry report.