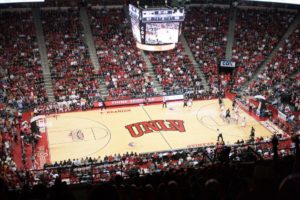 April 22, 2019 – Universities have been increasingly turning to search firms to fill their top coaching vacancies. Executive search firm Fogler Consulting recently placed T.J. Otzelberger as the men’s head basketball coach for the University of Las Vegas, Nevada (UNLV).  Mr. Otzelberger comes to UNLV from South Dakota State University (SDSU), where he compiled a record of 70-33 during his three years as head coach.

Desiree Reed-Francois, UNLV’s director of athletics, enthusiastically welcomed Mr. Otzelberger to his new job. “When I set out to find the next coach of our Runnin’ Rebels, I sought a hard-working, laser-focused head coach who personifies our core values, who knows what success looks like, who is passionately committed to winning and who is at ease with being the face of our storied basketball program,” she said. “T.J. exemplifies these attributes. I am confident he is the right coach to bring the Runnin’ Rebels into a new era of preeminence.”

UNLV’s former coach, Marvin Menzies, was let go last month after three years of leading the program. His teams had a record of 48-48.

Mr. Otzelberger led SDSU to two NCAA Tournaments and one NIT appearance. He also clinched the outright regular season Summit League title the past two seasons and earned the league’s Coach of the Year honors. Prior to SDSU, Mr. Otzelberger served two separate stints as an assistant coach at Iowa State, covering eight seasons, as well as serving as an assistant at the University of Washington.

“I have been fortunate to coach at some amazing universities and it was going to take a very special opportunity to leave Brookings,” Mr. Otzelberger said. “UNLV basketball is one of the most storied programs in the nation and situated in one of the world’s greatest cities. I’m honored to have the opportunity to add to the Runnin’ Rebels’ rich history and my family and I could not be more proud to be the newest members of this world-class university and Las Vegas community.”

A native of Milwaukee, Mr. Otzelberger earned a degree from the University of Wisconsin-Whitewater where he played collegiately and was a two-year team captain.

“Coach Otzelberger is a rising star in coaching and a proven winner whose teams have performed at a high level, both academically and in competition,” said UNLV president Marta Meana. “I’m impressed by coach Otzelberger’s immediate and long-term vision for the program and his commitment to player development at all levels. Runnin’ Rebel basketball has a rich history and a very bright future, and we look forward to welcoming coach Otzelberger and his family to UNLV.”

The search firm is led by Eddie Fogler, a former National Coach of the Year with 30 years of Division I coaching experience. Among the schools that have used Fogler in recent years is Colorado State University, one of UNLV’s rivals in the Mountain West Conference.

“You want to get good advisement, but you also want to get a great value,” Joe Parker, athletic director at Colorado State, told the Review Journal. “In the space of basketball, I don’t think you can really beat Eddie. He’s not a comprehensive search firm by any means. He doesn’t position himself in that manner, so he doesn’t have all the trailing infrastructure of other firms that help you and do a good job with advisement in that area, but he does it in a way that’s much more efficient. It’s because his practice focuses solely on basketball.”

One of the benefits of using a search firm, such as Fogler, as opposed to a public university conducting its own search, is that the search firm is not subject to public record requests. Therefore, candidates’ names are not revealed, saving the coaches potential embarrassment with their current schools.

“You don’t want to do that to anyone,” Mr. Parker told the Review Journal. “They’re committed to their current roles, and they’ve got obligations to their existing campuses. You don’t want to create any uncomfortable situations with people that have to go back and explain why they had an interest in an opportunity.”

Fogler Consulting was established in 2006. Since then, universities and colleges have turned to Mr. Fogler for insight into the world of collegiate basketball coaching, and for top talent. Since launching his business, he has placed more than 30 college coaches across the nation at all levels of Division I basketball in an unusual search specialty that seems to have high growth potential. A review of just some of Fogler Consulting’s clients reads like a Who’s Who of leading American colleges and universities: Vanderbilt, Boston College, Ohio State, Texas Tech, Rutgers, Penn State, Georgia Tech, Michigan, Auburn and South Carolina, just to name a few.