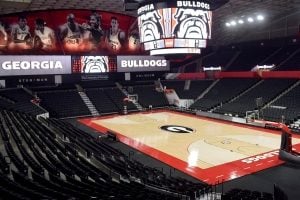 June 25, 2018 – Universities continue to turn to search firms to fill their top coaching vacancies. Recently, Collegiate Sports Associates (CSA) placed Tom Crean as the new men’s head basketball coach for the University of Georgia Bulldogs. He replaces Mark Fox who was fired at the end of the season after nine years with the school. The search firm was paid a modest consulting fee of $60,500, according to the Athens Banner-Herald.

“Tom Crean is one of the most successful coaches in college basketball over the past two decades,” said Greg McGarity, Georgia’s director of athletics. “His teams have consistently been participants in postseason play, and his players have been extremely successful in the classroom. He’s going to be a great fit for the University of Georgia. I’m extremely excited to have him leading Georgia basketball into the future and to welcome his family into the Bulldog Nation.”

Mr. Crean compiled a 356-231 record in 18 seasons at Marquette and Indiana from 1999 to 2017. His teams have reached postseason play during 13 of those campaigns, with nine NCAA appearances and four NIT bids. Mr. Crean led Marquette to the 2003 NCAA Final Four and has reached four Sweet 16s at Marquette and Indiana. Mr. Crean has also coached eight players who have won All-America honors. All 52 seniors to play for him during his head coaching career have earned a degree. Mr. Crean, 51, spent the past year working for ESPN as a college basketball analyst.

“Make no mistake, this is a basketball program inside of a great university that can compete for championships doing it the right way,” said Mr. Crean. “We will work diligently and with great energy to make everyone associated with the University of Georgia very proud of our efforts.”

Georgia has turned to search firms in other recent head coaching hires. According to the Athens Banner-Herald, it paid CarrSports Consulting $42,175 for the hire of football coach Kirby Smart in 2015 and also spent $7,500 to Terry Pettit “for services rendered in coaching search for head volleyball coach.”

Established in 1891, Georgia’s men’s basketball team has competed in the Southeastern Conference since its inception in 1932.The Bulldogs have appeared in the NCAA Tournament 12 times. The school has also produced a number of basketball greats, notably Basketball Hall of Famer Dominique Wilkins.

Check Out These Related Articles On Searches For University Coaches: