Menu
View our Events
Stay Connected:
ENGAGE Research has analyzed labor market data, insights, and trends—data that are used in the firm's predictive passive recruiting technology. Let’s take a closer look at some surprising tenure and job level analytics in their latest report. 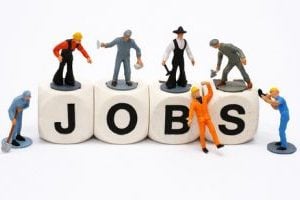 August 8, 2017 – An already tight labor market has likely only continued to tighten over the past 18 months, an analysis of ENGAGE Talent tenure data shows.

The study by ENGAGE data scientists, which covered 50 million US workers and professionals, concluded that the current median job tenure is 3.67 years.

More recent BLS data also show tightening of the labor market. Job openings have outpaced hires every month except for two over the last two years, while unemployment has continued to trend downward. This indicates increased labor demand and dwindling labor supply.

Not surprisingly, job level also plays a large role on tenure in current position. This analysis reveals some intriguing findings, including:

As one would likely expect, across jobs—excepting board members—the lower the job level, the shorter the current median tenure tends to be. Executives’ current tenure is nearly twice that of non-managers. The median job tenures by job level across jobs are: 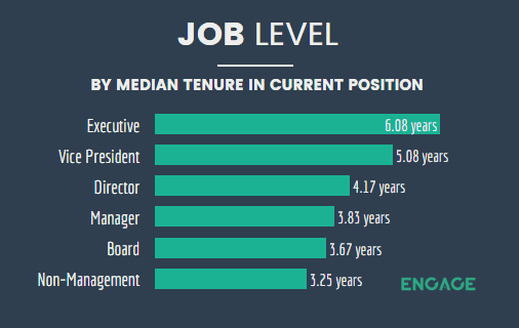 IT is an exception to the rule above, with vice presidents, directors and managers having longer median tenure than executives.

Across job levels, the 25th percentile for tenure has a much smaller range, with board members the shortest at 1.5 years and executives the longest at 2.92 years.

Riot Games, a new Ezayo launch partner, has some dynamite talent and recruiting positions available from Los Angeles, Mexico City and Berlin to Ho Chi Minh City, Hong Kong, and Shanghai! The company seeks humble but ambitious, razor-sharp professionals who are passionate gamers – but even more passionate about hiring great talent around the world. Apply Now!

The Top and Bottom Jobs by Median Tenure

The economy, of course, isn’t the only factor that has an impact on median job tenure. For example, the type of job has a large impact. Looking at the top and bottom jobs by tenure, it generally appears that jobs requiring more training, skill, and education tend to have longer tenures, which also most likely correlates with higher salaries. The one exception here is athletes, who have shorter tenure but often much higher pay. (If only we could all be professional athletes!) 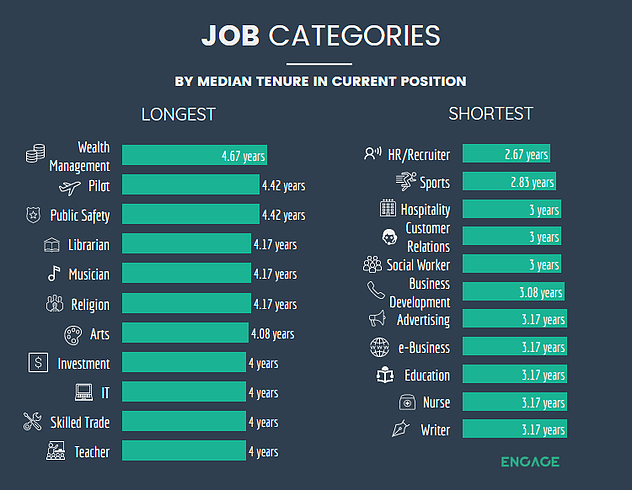 When Do People Leave Jobs?

We can also break down the tenure of past positions, which allows us to evaluate when people actually leave jobs. Here are some findings from analyzing this data:

How Employers Can Use Tenure Data

Tenure data aren’t just interesting. They are helpful for talent strategy, including the areas of succession planning, building a candidate pipeline, and recruiting passive candidates—all of which are more important given today’s high turnover rates.

Here is a quick look at how tenure data can help in each area:

Succession planning — Knowing, for each job type, when managers and above tend to leave on average tells employers when they are likely to need to replace those key employees as a group. They should plan accordingly with preparing internal talent to potentially take over those roles.

Passive candidate recruiting — Comparing how long other employers’ individual workers have been in their current roles with the median tenure for those roles can help indicate whether those workers are more or less likely than average to be interested in having a job conversation.

Clearly, tenure can vary significantly across job roles. While knowing overall tenure data is a good indicator of the overall strength of the labor market, it’s important to look closely at the data when evaluating them to use in employer talent strategies. This is why employee tenure is among the factors considered by our ENGAGE predictive recruiting solution, which enables employers to strengthen their succession planning, candidate pipeline, and passive candidate recruiting.