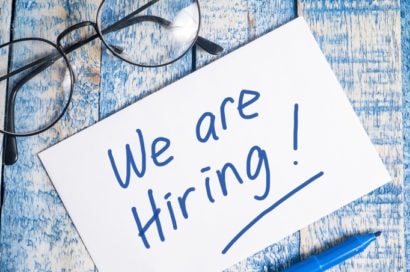 September 10, 2019 – U.S. employers expect the hiring pace to remain positive in the fourth quarter with hiring intentions improving one percentage point compared to a year ago, according to the latest “Employment Outlook Survey,” released by ManpowerGroup. Employers in all U.S. regions and industry sectors said they were expecting headcount to grow. This is the seventh consecutive year of double-digit hiring outlooks in the U.S., according to the survey of more than 11,500 U.S. employers.

“We’re still in a time of unprecedented opportunity for U.S. workers as there are more open jobs than there are people actively seeking work,” said Becky Frankiewicz, president of ManpowerGroup North America. “While the global economic landscape is increasingly uncertain, employers still intend to hire across all industries.”

“Businesses are staying focused on growth and we’ve seen more commit to investing in upskilling their people – that is, teaching them new skills for future jobs – in the last two months than we have in the last two years,” she said. “We’re advising clients on how to align these training programs with future roles, creating career pathways to help people stay employable for the long-term.”

Employers in the national mining sector reported a moderate decline in hiring sentiment in comparison with the previous quarter, resulting in the weakest outlook in two years. Hiring prospects were slightly weaker in five nationwide industry sectors when compared with the previous quarter, including the financial activities sector where the outlook was the weakest reported in two years. Employers in the information, nondurable goods manufacturing, professional and business services, and transportation and utilities sectors also reported slightly weaker hiring plans.

Employers in all four regions in the U.S. showed a positive outlook for the coming quarter. In the Midwest, employers in 21 percent of the businesses surveyed expected to grow payrolls during the next three months. With five percent of employers expecting to trim payrolls and 73 percent anticipating no change. Leisure and hospitality sector employers in the Midwest reported considerably stronger hiring intentions for the next three months when compared with the previous quarter. Employers in three Midwest industry sectors anticipated moderately stronger hiring activity in comparison with the second quarter of 2019: construction, government and information.

Northeast employers in 21 percent of businesses surveyed said they expect workforce gains during the coming quarter, while five percent said they anticipate a decrease and 73 percent expected no change. Leisure and hospitality employers in the Northeast reported moderately stronger hiring plans for the coming quarter in comparison with the third quarter. Slightly stronger hiring intentions were reported in two of the region’s industry sectors: construction and other services. Northeast employers in the durable goods manufacturing sector reported a relatively stable hiring pace when compared with the previous quarter. Employers in the region’s financial activities sector reported considerably weaker hiring prospects in a quarter-over-quarter comparison. Outlooks were moderately weaker in three Northeast industry sectors: government, information, and professional and business services.

Employers in 22 percent of businesses surveyed in the South said they expect to add to payrolls during the October to December period, with five percent of employers expecting to trim payrolls and 72 percent anticipating no change. Durable goods manufacturing sector employers in the South reported a slight improvement in hiring intentions when compared with the previous quarter. The hiring pace remained relatively stable in four of the South’s industry sectors when compared with the third quarter of 2019: Education and health services, information, leisure and hospitality, and wholesale and retail trade.

In the West, employers in 23 percent of businesses surveyed said they anticipate an increase in payrolls during the next three months, while six percent said they expect a decrease and 70 percent expect no change. Employers in two of the West’s industry sectors reported moderately stronger labor markets in comparison with the third quarter of 2019: government, and wholesale and retail trade. Slightly stronger hiring prospects were reported for the other services sector. Hiring plans remained relatively stable in three of the region’s industry sectors quarter-over-quarter: construction, durable goods manufacturing, and professional and business services. 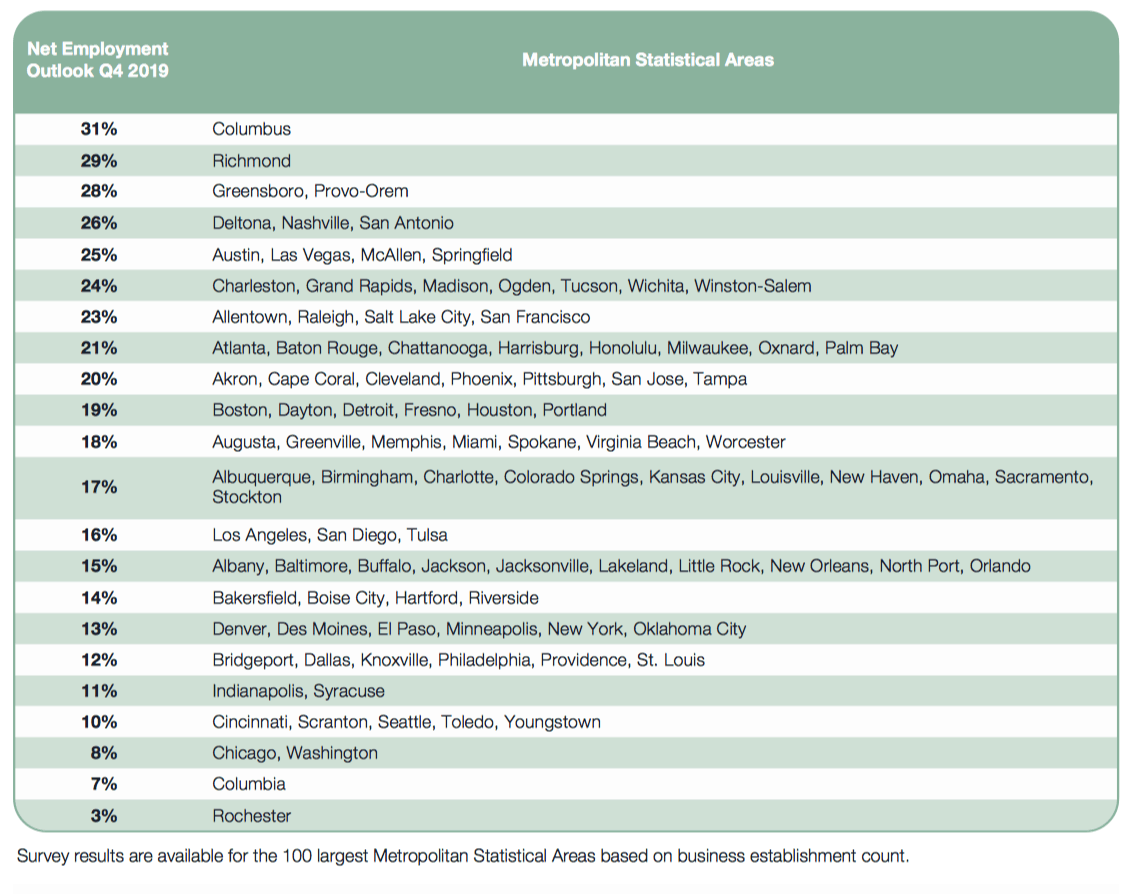 ManpowerGroup interviewed over 59,000 employers in 44 countries and territories to forecast labor market activity in the fourth quarter. All participants were asked, “How do you anticipate total employment at your location to change in the three months to the end of December 2019 as compared to the current quarter?”

The ManpowerGroup research for the final quarter of 2019 reveals that employers expect to grow payrolls in 43 of 44 countries and territories surveyed in the period up to the end of December 2019, with employers in one country forecasting no change to hiring intentions. The strongest hiring prospects were reported in Japan, Taiwan, the U.S., India and Greece, while the weakest hiring activity was expected in Spain, the Czech Republic, Argentina, Costa Rica and Switzerland.

In a comparison with the previous quarter, employers in 15 of 44 countries and territories reported stronger hiring intentions, while employers in 23 said they expect a weaker hiring pace, with no reported change in six. When compared with the fourth quarter of 2018, hiring plans also strengthened in 15 countries and territories, declined in 23 and were unchanged in six.

Related: Top 5 Reasons Why the Job Market will Continue to Flourish in 2019

Employers expected to add to payrolls in 25 of 26 Europe, Middle East and Africa (EMEA) region countries surveyed during the coming quarter, while employers in Spain expected a flat labor market. In a comparison with the previous quarter, hiring plans strengthened in 10 countries but weakened in 12. When compared with last year at this time, Outlooks improved in eight countries, but declined in 14. The strongest hiring intentions for the coming quarter were reported in Greece and Slovenia, while employers in Spain, the Czech Republic and Switzerland reported the weakest hiring sentiment.

4 Emerging Trends to Watch as 2019 Heads Into High Gear
If the second half of 2019 is anything like the first, business leaders are in for a wild ride. The geopolitical landscape remains as volatile as the stock market. Signs of an economic slowdown are emerging, making consumers and investors equally skittish.

Payroll gains were anticipated in all 10 Americas countries surveyed during the final quarter of 2019. When compared with the prior quarter, Outlooks improved in two Americas countries, but decreased in seven. In a comparison with this time one year ago, hiring intentions strengthened in five countries but weakened in five. Employers in the U.S. and Canada expected the strongest hiring activity during the forthcoming quarter, while the region’s weakest labor markets were expected in Argentina and Costa Rica.

“I always look forward to the Manpower report on nationwide hiring intentions,” said Richard Risch, founder, chairman and CEO of New York-based executive search firm Risch Group. “First, I am a Milwaukee boy, born and raised. So I have several close contacts at the firm that I stay in touch with to talk Packers, Brewers and, of course, hiring trends.”