Menu
View our Events
Stay Connected:
At a time when fears of a global recession are growing, today’s jobs report offers hope. Although weaker-than-expected, today’s figures all but assure a second interest rate cut. Let’s check out the latest numbers. 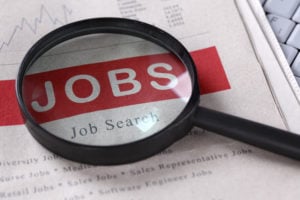 September 6, 2019 – Employers added 130,000 jobs last month, keeping the U.S. unemployment rate stands at 3.7 percent, according to the most recent U.S. Bureau of Labor Statistics report. The increase was below the 160,000 forecast by economists but close enough to signal a relatively stable and healthy jobs market. The August gain is the 107th consecutive month of job growth. The number of unemployed currently stands at 6.0 million. The key question now: can the U.S. economy continue to expand in the face of growing headwinds – from weak manufacturing to a looming recession in Germany to the fallout from Brexit later this year.

“Although job growth slowed down in August, employment in the gig economy is continuing to grow at an exponential rate,” said Rebecca Henderson, CEO Randstad global businesses. “With projections that gig workers will amount for almost half of the workforce by 2027, employers need to implement recruitment strategies that resonate not only with permanent talent, but with contingent ones as well.”

“One of our recent studies found that 72 percent of permanent talent and 71 percent of contingent talent look to work for companies that put an emphasis on creating diverse and inclusive workplaces,” she said. “Companies across the nation already have diversity and inclusivity programs in place, but what this study is highlighting is the need for human capital professionals to build out a universal framework that meets the needs of a total talent workforce.”

U.S. employers are expecting hiring to pick up as we look to the second half of 2019, with 21 percent of employers planning to add staff, according to the latest “Employment Outlook Survey,” released by ManpowerGroup. Employers in all U.S. regions and industry sectors said they are expecting headcount to grow.

Looking further ahead, economists foresee ongoing economic expansion for at least the next 12 months and companies expect to continue hiring, according to a business conditions survey released by the National Association for Business Economics (NABE). All survey respondents said that they expect the U.S. economy, as measured by the change in inflation-adjusted gross domestic product (real GDP), to increase over the next four quarters.