Stay Connected:
A new report by Paychex examines hot workplace topics — benefits, HR technology, pay equity, company social responsibility, retirement and more — to determine how these HR trends are impacting them and how their workplace expectations are evolving. Let’s look into the report as executive recruiters weigh in on the findings. 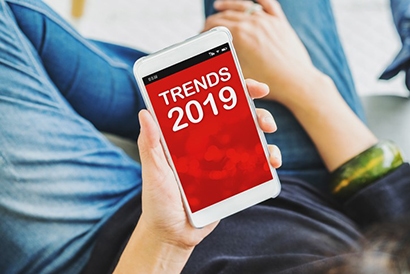 February 15, 2019 – Surveys on workplace topics often poll employers to gain their perspectives on the latest HR issues and trends – but, in a recent survey, Paychex went directly to the source and obtained insight from employees themselves. It questioned employees on hot topics like benefits, pay equity, HR technology, corporate social responsibility and more, to determine how these trends are impacting them and how their workplace expectations are evolving.

“As businesses shift into the future of work, it’s as important as ever to understand employees’ workplace expectations, challenges and requirements,” said Maureen Lally, vice president of marketing at Paychex. “While employers can implement changes from the top, employees ultimately define what the American workplace looks like. Their habits, preferences and behaviors are what shape company culture.”

In this report, Paychex’s insights and data provided a snapshot for employers that highlight the prominent HR trends and how they’re impacting employees, ultimately helping companies to better recruit, hire and retain top talent.

Ask any HR professional to describe the open enrollment period and you’ll probably get a response such as, ‘Ever heard of April during tax season for a CPA?’ During open enrollment, HR departments can receive dozens, hundreds, even thousands in some cases, of emails and calls from employees seeking answers to questions such as, ‘What’s new?’ and, ‘Is there a comparison chart?’ And sometimes employees are simply trying to move from one screen to the next to submit their selections.

“Often, it’s the technology that trips up employees, whether it not be intuitive enough or perhaps, as the survey showed, employees in a certain age range wanted additional technology to help smooth out the process,” the Paychex report said.

More than one-third (37 percent) said that the biggest change to open enrollment would be the addition of an assessment tool to help employees identify the best plan options. And among that group, 60 percent of those 50 to 65 years old chose that as their No. 1 item to change. Another 18 percent desired self-service technology that would enable them to complete the process more efficiently on their own, while more communication (23 percent) and additional resources to educate themselves (22 percent) were also listed among the choices for top changes to make.

No one aspect emerged as the clear-cut most complicated aspect of open enrollment, though, with “keeping up with plan changes” (29 percent) ranking slightly higher than “evaluating all providers and plan options” (28 percent) and “trying to predict personal and family needs” (28 percent). A gender disparity was apparent with the latter, as 33 percent of women ranked predicting personal and family needs as their No. 1 most-complicated aspect, while 24 percent of men ranked it third.

What employers should note, said Paychex, is that a ratio of two-thirds to one-third of those surveyed felt that they both were receiving enough training to become the best employee in their current role (66 percent “yes” to 34 percent “no”) and that their employer was providing enough support and skill development to advance their career with the company (61 percent said “yes” and 39 percent said “no.”) Those are both significant differences and present a retention opportunity for employers.

Paychex also found that how training is delivered appears to be an area in which employers can make the most inroads in developing employees’ skills, and ultimately employee loyalty. “Employees want training that is accessible and efficient, and perhaps more flexible with their work schedules,” the report said. “This lends itself to an online Learning Management System (LMS) that features e-learning courses that can be accessed easily from a library by onsite and remote employees anytime and from anywhere.”

Forty-four percent of employees surveyed, however, said their employer failed to provide training opportunities through an LMS, compared with 36 percent who did and 20 percent who said they were not sure.

Related: Motivating Leaders: Why Unlocking Their Potential Is Critical

The type of training provided ranged from internal training on company processes (67 percent) to bringing in outside experts to train in key areas (48 percent), and providing funding for employees to seek outside training (40 percent). Nine percent indicated no training was offered at all.

“There are opportunities for employers to meet and even exceed employee and perhaps prospective employee expectations by enhancing their training and skill development opportunities, as well as offsetting some of the disparities about advancement that exist among different generations,” Paychex said. “The result, as the survey data demonstrate, is firming up loyalty toward the company and enhancing your employer brand – benefits to building a positive culture within the workplace.”

If employers who have not been swayed by the importance of HR technology in the workplace need that ‘lightning strike’ moment, consider this: The 50- to 65-year-old group overwhelmingly agreed (96 percent) that applications should be simple and mirror the experience of consumer apps. And this was from the least likely group to “expect HR technology from their employer” and who overall were 36 percent neutral on the topic.

Nearly three-quarters (71 percent) of those surveyed agreed that they want employers to provide a high level of employee self-service (ESS) that enables them to conduct multiple HR tasks, including updating an address, reporting hours, and managing retirement.

Of the 85 percent who agreed, 46 percent said they strongly agree the experience should be simple and provide an intuitive user experience similar to that of consumer apps. Employees were basically saying that using any technology, in particular HR tech, should not be burdensome. It should instead be easy and not feel like more work.

“Advances in technology, combined with this demonstrated shift in employee expectations, present a real opportunity for employers operating in the small and mid-sized markets,” said Tom Hammond, vice president of corporate strategy and product management at Paychex. “Enhancing the employee experience through technology that empowers workers to be self-reliant will reduce the overwhelming HR workload many employers face and help enable such businesses to attract and retain top talent, boost employee engagement, and ultimately grow their business.”

A majority of employees – regardless of age – want to work for an organization that cares about more than just the business. They want to know that their place of work is making a difference in the local community and contributing to its well-being, socially and economically. Employees also want the company to support their passion projects and the things they value, whether that be protecting the environment, supporting reading in schools or raising money for medical research.

The data also put a dent in the myth that only younger employees care about whether their employers demonstrate corporate social responsibility (CSR). Among the 34 to 49 age group, 94 percent indicated the importance of working for a socially responsible employer, while even the 50 to 65 age group overwhelmingly agreed (90 percent) on the importance of employer social responsibility.

“CSR is an important driver in attracting and retaining talent for companies today,” said Laurie Zaucha, Paychex’s vice president of HR and organizational development. “More than ever before, candidates research prospective employers before applying and are looking for organizations whose values align with theirs. CSR also drives employee engagement and retention, ultimately delivering stronger business results.”

In this survey, Paychex asked about the level of confidence that employees had that their current employer is regularly auditing employee pay to ensure pay equity. The most startling “gap” existed among the age groups and then to a lesser degree between genders. Overall, 76 percent of employees surveyed said they were either very confident or somewhat confident that audits of pay were occurring, with an equal 38 percent falling in one or the other category.

Of those employees ages 50 to 65, not only did 33 percent express a lack of confidence that such audits were happening, but of the 67 percent who were confident, only 28 percent felt strongly. This same age group also was most likely never to have expressed (verbally or written) concern to their employer about their current rate of pay with more than half (57 percent) indicating as such. The entire pool of responses included 52 percent answering “never” while a combined 48 percent listing their answer as once (16 percent), two to three times (23 percent), and more than three times (nine percent) in expressing concern (to a manager, owner or HR) that their pay rate was not equitable to another employee with a similar role and responsibilities.

Slightly more men than women said they were confident audits for gender equity in pay were being conducted, with a 77 percent to 74 percent split. Even those who indicated that they were “very confident” varied little between men (40 percent) and women (36 percent).

Similarly, just a hint more than half (51 percent) of men surveyed said they expressed written or verbal concern about an equitable rate of pay as compared to an employee with a similar role, while 48 percent of women did the same. When the rate went to expressing concern two to three times, the gap was larger between men (26 percent) and women (21 percent). Surprisingly, when an employee flagged it more than three times, it was women (11 percent) who did the flagging more than men (eight percent).

“This survey reinforces the importance of employers remaining engaged in regular discussions with employees about the workplace experience and the trends that matter most to employees,” said Andrew Golden, partner at Atlantic Group. “Communication is critical and open conversation goes a long way. Too many companies rely solely on email memos, announcements and updates and in doing so important information can fall through the cracks.”

“The over-riding trend is that over the past decade organizations realized that to continue to be competitive in their recruitment efforts they need to know what employees really want from their employer,” said Roy Munk, founder and president of Global Healthcare Services.  “Obviously, competitive compensation and benefits is crucial, however, beyond this, there are a wide array of other areas where employers can increase employee satisfaction & loyalty.”

“I’m surprised that workplace flexibility and remote working opportunities were not mentioned as a driving factor for many employees when choosing a company for which to work,” Mr. Munk said. “Even in healthcare, where flexible scheduling can be a challenge, we have noticed several hospitals moving toward self-scheduling, options to volunteer for overtime, and increased remote opportunities where possible.”

“The most striking thing about the study results is the very different perspectives by age group, and the significant adjustments companies will have to make as the next generation of employees begin to dominate the workforce,” said Ted Pryor, managing director at Greenwich Harbor Partners. “Young people expect more flexibility in working styles, different evaluation techniques, different incentive structures and different types of communication, and large and small companies will have to adapt. Generational differences are always present if only due to age and maturity, but these survey results point to fundamental changes in attitude.”

“The study is very stark when comparing views of younger (under 50) respondents versus older (over 50) respondents, but it doesn’t address the intuition that younger people are much more trusting of technology and will, for example, do 100% of their banking on-line, away from branches and paper checks,” said Mr. Pryor. “Mobile payments are booming and that will have implications for employee behavior. For example, how many employees can change their investment choices for their 401k on their mobile phone? I am sure younger employees expect this of ease of access.”

“This study confirms what we are seeing, that employees desire to share the responsibility for building the organizations they are part of,” said Kevin O’Neill, co-founder and managing partner of Acertitude. “Less of a top-down mandate; all voices at every level have a part to play.”

Related: How to Attract, Engage and Retain Talent in 2019