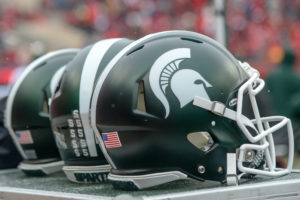 February 14, 2020 – Glenn Sugiyama, managing partner and global sports practice leader at DHR International, has placed Mel Tucker as the head football coach for Michigan State University. Mr. Tucker is a 23-year coaching veteran with championship experience. He replaces Mark Dantonio who recently stepped down after 13 seasons with the Spartans. The school paid DHR $100,000 for its services.

“It was an honor to be entrusted with the biggest athletic search at Michigan State in over a decade,” Mr. Sugiyama said. “Mark Dantonio is a great coach and even a greater person…not only is he the winningest coach in Michigan State history, he is one of the best human beings I have met in college football and attempting to replace him is an impossible task. I am thrilled for Mel Tucker and his beautiful family…to bring him home to Michigan State where he began his career working as a graduate assistant coach for Nick Saban and Mark Dantonio completes the circle.”

“Mel Tucker has a strong reputation as an intense and dynamic coach and we’re excited to have him bring that energy to MSU,” said Samuel L. Stanley, president of Michigan State. “Leading our football program on the field and in their development as student athletes is no small task and we are confident he is the right person for the job. We look forward to having coach Tucker join our Spartan family.”

“It brings me great pleasure to welcome Mel Tucker to the Spartan family as the 25th head coach in Michigan State football history,” Michigan State athletic director Bill Beekman said. “Mel brings a championship pedigree, NFL experience, connections to our region, success on the recruiting trail and head coaching experience to our program.”

“Beyond his impressive list of credentials is an even more impactful leader of men with an energetic personality that will pay dividends on the recruiting trail,” said Mr. Beekman. “Perhaps more importantly, he’ll connect with our student-athletes to help them develop beyond just their skills on the football field. His attention to detail will leave no stone unturned in his drive for championships.”

Mr. Tucker’s resume, which began as a graduate assistant at Michigan State under Nick Saban, shows an impressive track record of success. The journey that led him back to East Lansing, MI, includes a head coaching position at the University of Colorado (2019), five seasons as a defensive coach in the Southeastern Conference (2000; 2015 to 2018), 10 seasons in the NFL (2005 to 2014), and four seasons at Ohio State (2001 to 2004). He was a defensive coordinator in the NFL for seven seasons and 11 seasons overall in his coaching career.

In 142 games as a full-time coach in the FBS, Mr. Tucker’s teams have collected a 106-36 record, including 11 postseason bowl games, three conference championships, three national championship games and two national championships (2002 with Ohio State, 2015 with Alabama). He coached 160 games in the NFL (64 with Cleveland, 64 with Jacksonville, 32 with Chicago). Mr. Tucker is nationally recognized as a top recruiter and developer of talent, working with numerous NFL draft selections, including nine first-rounders, and multiple All-Americans and Pro Bowlers.

“It’s fitting that Mel returns to the place where his coaching career began as a graduate assistant,” said Mr. Beekman. “While he returns to Michigan State with a loftier title, his passion is every bit as fierce. Head football coach might be his title, but he will be an amazing ambassador for our department, our university and more than 550,000 living alums.”

“It is a blessing and honor to return to Michigan State University where I began my coaching career with Nick Saban,” said Mr. Tucker. “Returning home to Michigan State is a once in a lifetime opportunity for me and my family but it created the toughest decision of my life – to leave Colorado.”