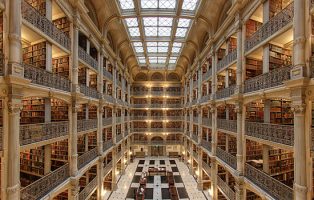 The library’s CEO is one of the most historically significant librarian positions in the country. Enoch Pratt  was a Baltimore banker and investor in railroads, steamships, and coal in the 18th century. In 1882 he gave Baltimore City a free library, which, as he stipulated, “shall be for all, rich or poor without distinction of race or color.” At that time in the U.S., Mr. Pratt’s stipulation was a dramatic declaration of equality and vision.

Today, the new library leader will likely have similarly strong vision, with an ability to engage the organization’s entire staff in order to implement its current two-year stated strategic plan. The position became open when Dr. Carla D. Hayden left to become the 14th Librarian of Congress in September.

Minimum qualifications include a master of library and information science from an ALA-accredited program, 10 years in library work and at least five years of senior library management (or an equivalent background and experience that will enable the candidate to effectively perform the responsibilities of the position).

The chosen chief will also need to be an effective communicator working with with staff, board members and stakeholders; have strong organizational skills with an ability to integrate emerging technologies with traditional library resources; and be experienced in strategic planning, fiscal management and resource development. Preferred qualifications include a PhD in library and information science (or other relevant advanced degree), experience working in a multi-branch urban library system, and prior success reporting to a governing board and working closely with city and state officials.

Bradbury Miller specializes in executive searches almost solely for the library sector. About 80 percent of the firm’s work is for public libraries, though it also conducts searches for state libraries, library networks or consortia, and academic libraries. The firm was founded in 1983 and has conducted approximately 130 searches to date.

Like most other sectors, libraries are anticipating high turnover as aging baby boomers continue their migration into retirement. A recent American Library Association study projected that 28 percent of U.S.-based working librarians are expected to retire by 2020.

“The uptick in searches throughout the field has been growing for the last couple of years,” said Mr. Bradbury. “Finding the best library president, CEO, executive director, or director — probably the most important decision a sitting library board or commission will make — is becoming more challenging because many of the logical successors who have been serving in deputy, assistant or associate director roles are aging baby boomers themselves.” The pools of willing and able prospects are, therefore, shrinking, he said.

“Libraries are seeking dynamic leaders with a vision for what the library can be for the communities they serve,” said Mr. Bradbury. “Governing boards are looking for top drawer talent to serve as inspirational leaders who are collaborative in building meaningful community partnerships,” he added.

“Fortunately, there are strong library credentialed leaders out there who can fill the bill, but they have to be sought out,” said Mr. Bradbury. When not bound by other requirements, governing boards, he added, often look for leaders from other industries, including non-profit, education, government and even the private sector.

Search firms across the nation are finding library leadership needs rising dramatically. Here’s a recent sampling of some recent important searches in the sector from the Hunt Scanlon Media archives:

Check Out These Related Articles On Searches for Museums & Historical Organizations: