Menu
View our Events
Stay Connected:
Organizations are quickly increasing their use of temporary workers. Let’s take a closer look into what's giving rise to the gig economy and why so many are flocking to these flexible employment opportunities. 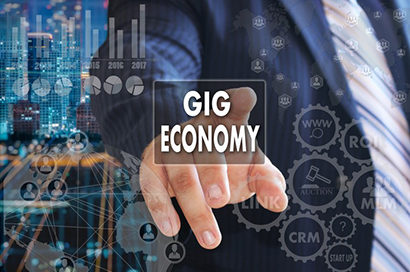 July 10, 2018 – Today’s business environment is vastly different from just five years ago. Success is no longer measured by a company’s longevity or headcount. Today, the business currency is agility and innovation. Technology has forever transformed how work gets done, and the flexible workforce has changed who does it.

Flexibility has evolved from being singularly defined as traditional temporary labor to workers that instead work when, where and for whom they want. Once synonymous with rideshare drivers and errand services, the gig economy has come of age, according to the recently released “2018 Profile of a Gig Worker Report” by Shiftgig, a Chicago-based start-up that connects companies with temporary workers. The report, which surveyed more than 2,000 U.S. residents, sought to clarify who today’s gig workers are, why they’re working this way, what motivates them, what role gender might play and how businesses can be strategic participants in the gig economy.

The gig economy is no longer considered a narrowly-focused spinoff of the traditional temporary workforce without a place in the modern enterprise’s talent strategy, said the study. And it is here to stay. In the next five years, 50 percent of Americans will be independent or will have worked independently, according to MBO Partners’ “State of Independence in America” report. “With the maturation of the model itself and the technology enabling it, optimization of gig workers is a valuable differentiator for companies across all industries,” said Shiftgig.

Gig workers of today and the future are well-educated and looking to maximize the flexible financial opportunities afforded to them through alternative work arrangements, said the study. Almost half of U.S. workers (47 percent) would consider picking up business-based gig work, according to the report. Respondents indicated a high level of interest in temporary roles at local businesses.

Forty-five percent of the respondents had a bachelor’s or master’s degree. In addition, the report found that the highest percentage of those who have worked business-based gigs, 44 percent, were students, followed by retirees at 40 percent and full-and part-time workers at 37 percent and 36 percent respectively. The Shiftgig report also found that 34 percent of the respondents met the criteria to be a good fit for business-based gig work.

“These findings reveal a massive, untapped opportunity in the gig economy for people to have more flexible, hourly work options with businesses,” said Wade Burgess, CEO of Shiftgig. “The people looking to pick up this work have the soft skills like strong customer service orientation, active listening and social perceptiveness that will benefit businesses looking to fill hourly labor needs.”

The study found that the gig economy creates an environment that is inclusive, unbiased and opportunistic, for both businesses and the workers themselves.  “It’s truly the future of work,” said Mr. Burgess.

Businesses have long engaged with individuals as direct employees, consultants or via staffing agencies. “While each of these arrangements are unique, the model has largely been the same,” the report said. “Companies identify work that needs to be completed, and then determine whether to engage with a full-time employee, a temporary worker, consultant, agency or perhaps even an outsourcing provider.”

But the gig economy ushered in a new way to connect people and work, and there’s more to it than freelancers and independent contractors providing professional services. “Hourly work is also part of this surging trend with new technologies flipping the old business model on its head – putting the individual in control to choose the roles they want to work,” Shiftgig said.

Who is Powering the Gig Economy?

To better understand the demographics of today’s gig worker, Shiftgig asked about the workers’ locations, education levels, employment status and occupations. The responses debunked certain myths and revealed a clearer view of the gig worker of the future.

For its report, Shiftgig referred to any work someone is doing for a local establishment such as an office, restaurant, warehouse, bar or retail store as “business-based work.”

A majority of those who are a good fit for business-based gig work live outside the city, said the report. Only 28 percent live in urban areas, while 59 percent reside in the suburbs and 13 percent are in rural areas. Shiftgig also discovered that 80 percent of respondents travelled to and from gigs in their own car, while 10 percent used public transportation and only seven percent biked or walked.

The survey also revealed that business-based gig workers are well educated, with 58 percent having an associate’s, bachelor’s or master’s degree. More than one third (34 percent) received a bachelor’s degree while 13 percent had an associate’s degree and another 11 percent completed their master’s.  “This flies in the face of conventional wisdom about traditional temporary workers, which commonly assumes they are an uneducated and unemployable group,” the report said.

More than a quarter (26 percent) of those who were identified as being a good fit for gig work identified their primary occupation as  homemaker, student or retiree. While these three combined are the demographic that would benefit from joining the gig economy, three quarters of those individuals have other jobs but are still interested in doing gig work. It’s worth noting, said the report, that homemakers, students and retirees are unlikely to have a relationship with a staffing agency. To connect with these segments, organizations must embrace a less traditional approach.

Those who are a good fit for business-based gig work are employed in industries that grant them the flexibility to take on gigs. The largest percentage (17 percent) of those who are employed but still a good fit are working in educational services (teachers, school administrators and substitutes), followed by 15 percent in the healthcare/social assistance industry (nurses, caretakers) and 13 percent in retail trade.

Teachers and school administrators tend to have breaks during the year, such as holidays and summer vacation, while nurses, doctors and other medical staff have changing schedules or work less than 40 hours per week. “Retail workers often have rotating schedules as well, and many work part time,” the report said. “While temporary workers are often considered chronically unemployed, these gig workers are educated, trustworthy professionals who are interested in picking up side gigs as their schedules allow.”

A key area that the study pursued was the motivations of gig workers. Why do they choose this type of work? What gigs do they want? And why aren’t they pursuing gig opportunities?

Across the board, the overwhelming response (74 percent) to why people chose gig work was financial: 37 percent said they need income to support themselves and their family; 22 percent supplement their income with gig work; eight percent are working gigs for faster access to income; and seven percent are saving for a financial goal or life event. The remaining 10 percent are picking up business-based gigs to stay busy or active. Homemakers and students reported earning “most of their income via gigs,” at 35 percent and 24 percent, respectively. Twenty percent of retirees earned most of their income from gigs.

People are looking for gig opportunities either online or via apps that they use everyday, said Shiftgig, uncovering an untapped audience living and looking for work online. Asked why they wouldn’t pursue a business-based gig or provide ride-sharing through services like Uber or Lyft, respondents revealed an opportunity for companies looking to incorporate gig workers into their talent frameworks. Nearly 50 percent of those surveyed failed to pursue business-based gigs because they either lacked free time or thought this type of work would not be flexible enough, said the report.

Simply put, potential gig workers are unaware that flexibly scheduled gig roles are available at local businesses. “Also, even though respondents think they don’t have enough free time for gig work, they averaged around 20 hours per week which aligns well with plenty of available business-based gig roles,” Shiftgig said. “The findings show this group should be able to pick up a couple of shifts weekly, while still maintaining flexibility in their schedule. At the same time, far and away, the number one reason people don’t drive for Uber or Lyft is because they feel unsafe, with almost 46 percent saying it was the primary reason they wouldn’t pursue it as a side hustle.”