Menu
View our Events
Stay Connected:
Fifty nine percent of America's workforce is made up of hourly workers. A new report explores who these hourly employees are and how employers are helping to move their careers forward. 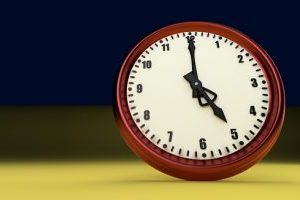 February 21, 2017 – Hourly workers continue to be a major driver of the U.S. economy. According to recent research released by LinkedIn and job board Snagajob, there are currently 78 million hourly workers in the U.S. comprising 59 percent of the entire country’s workforce.

Yet, there are very few resources dedicated to helping hourly workers get jobs and advance in their careers. “We live and breathe the hourly worker experience, and through our ongoing research and daily engagement with workers, we saw that there was a real need for resources to guide them through their employment journey,” said Peter Harrison, chief executive officer of Snagajob, which has 75 million registered members with access to more than 300,000 employers.

“We thought it was important to determine patterns that might be helpful for both workers and employers,” Mr. Harrison said, with the goal being to help connect people to jobs that would be engaging and lead to the fastest path forward.

“Our goal with this research is to provide the first in a series of resources in partnership with LinkedIn that reveal the best options and pathways available to hourly workers that are most likely to lead them to fulfilling, long term employment and rapid career advancement,” said Kim Costa, a job search coach for Snagajob. “In addition, we aim to offer hourly employers fresh insight into what motivates and engages hourly wage workers, to help reduce turnover and better engage and advance hourly workers.”

Most Hourly Workers Are Young, But Older Workers Have Considerable Education

The report also looked at education levels, and the findings there were even more surprising. Younger hourly workers naturally have less education than older hourly workers. But 45 percent of hourly workers over 30 have some post-secondary education, with 15 percent having a bachelor’s degree or more. The educational breakdown for hourly employees shows that 16 percent earned certificates; 14 percent have associate’s degrees; 12 percent hold B.A.’s; and three percent have Ph.D.’s.

What Matter Most to Hourly Workers

Hourly workers consider three things when looking for a job: speed, engagement and the number of applications to send out. But how quickly employers or industries hire can be critical for financially strapped job hunters. The survey found that, on average, restaurants hire within 27 days of receiving an application versus 33 days for retailers.

A Well-Rounded Skill Set Is Key to Advancement

While each industry requires some level of specialization to advance to management, there are some general skills that lead to success independent of industry. The report discovered that talent acquisition and talent management skills are the most universally valuable: 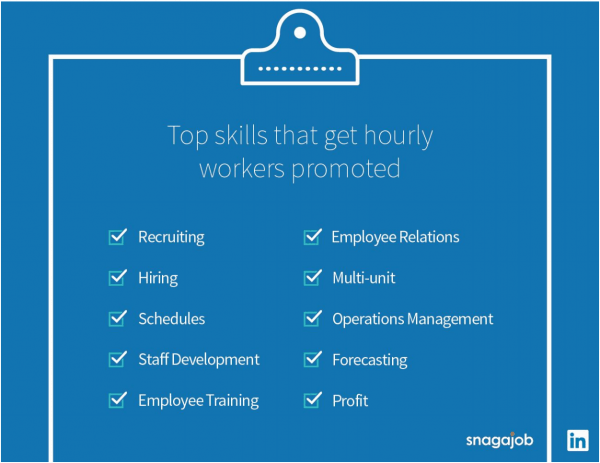 These skills are especially important if we consider how technological innovation impacts work. While we can’t predict exactly how technology will redefine certain roles, we do know it’s easier to automate physical tasks than it is to automate social and emotional ones like negotiating with a candidate.

The time that it takes to get a promotion matters. A promotion boosts pay, but it also provides more responsibility and training, which can lead to future promotions.

Some restaurants promote in as little as 15 months or as long as three and a half years, but the spread within each category is much less. This consistency is likely due to large chains dominating the restaurant industry and having standardized promotion tracks.

Healthcare, IT and Engineering Are Increasingly Popular

In looking at what these workers study, the report found that while business is most popular, healthcare, IT and engineering are growing the fastest. Hourly workers commonly study the arts, social sciences and communications too, but these fields are losing popularity.

These patterns likely reflect the increasing demand for STEM (science, technology, engineering and math) skills in our economy, and the higher pay that comes with them. They also indicate the growing need to care for our aging population.

A possible reason for the rise of the gig / on-demand / hourly economy might be that companies are finding the use of temporary / contract workers as a new approach to business structure and employment. It has been on the rise with companies utilizing these types of workers to fill positions during a time where talent shortages seem widespread ….. Here’s some further reading from Hunt Scanlon Media.

Massive Shift to Contract Employment Underway
By 2025, most workers (70 percent) and employers (68 percent) agree that a majority of the workforce will be employed in an ‘agile capacity.’ It is a wake-up call for business and HR leaders to quickly embrace and prepare for coming disruptive changes impacting how, when, where and by whom work is conducted.

The report concluded that by 2025 52 percent of C-suite executives said their organizations would be much more committed to building an agile workforce; the average employer expects 68 percent of their workforce to be comprised of agile talent.

But according to Rick Gray, chief executive officer of Chicago-based a TalentRISE, ’tis the season to reflect on past trends and to ponder what lies ahead. “There are pros and cons of an ‘on demand’ workforce,” he said. “In seasonal industries, it may be ideal and is not a new concept.” As CEO of an expanding recruitment consulting and talent solutions business, he said TalentRISE itself has leveraged on-demand talent by deploying a network of specialized recruiters for urgent client hiring needs.

But cons, he said, can include the erosion of loyalty and pride, the risk of a workforce of pure multi-taskers and no specialization, and perhaps even an entire generation running from gig to gig with little financial stability. “If this trend is inevitable,” he asked, “then how might it impact talent acquisition in the long run?” The end goal, he said, of getting the best workers deployed most quickly at the least cost possible will not change. “But how we all get there will,” he said.

Check Out These Related Articles On 2017 Hiring Trends: