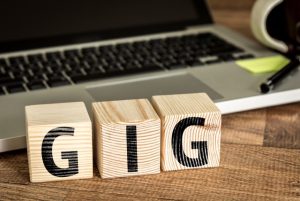 October 27, 2016 – Nearly two thirds of all businesses are actively reshaping how work is completed across their enterprise, blending a mix of contingent workers and payrolled employees to better leverage talent as a business differentiator, this according to the ‘The State of Contingent Workforce Management 2016-2017: Adapting to a New World of Work’ report released by research and advisory firm Ardent Partners.

The ‘gig’ economy is the new approach to business structure and employment. Traditionally, employees have a set schedule, received weekly / monthly salary and worked at their employer’s location. ‘Gigging’ is dismantling the bindings on work expectations and allowing employees to set their own hours, availability and deliverables.

‘Gigging’ as a Top Adaptation Strategy

According to the research, 63 percent of organizations are rethinking how work is addressed – ranking it as the top adaptation strategy currently being deployed in the shifting business and talent engagement environment. This transformation in executive thinking digs into the core of every corporate project and initiative, allowing for projects to be handled by a broader and more diverse collection of talent, including freelancers, independent contractors and gig workers, the report said.

“As workers seek more flexibility and employers embrace agility in all facets of their organizations, contingent work will exert more and more influence over companies’ success,” said Arun Srinivasan, senior vice president of strategy and customer operations for global cloud technology provider SAP Fieldglass, a co-sponsor of the report. “And as we head toward a fundamental shift in the composition of the workforce, companies will need to continue to adopt new strategies and integrate new technologies to engage external talent and turn it into a true business differentiator.”

According to the Ardent report, the size of the contingent workforce continues to grow – accounting for nearly 38 percent of all workers in 2016, up from nearly 35 percent in 2015 and about 29 percent in 2011.

“Across the world, the traditional notions of labor, work, and talent are being altered. Internal enterprise functions are reshaping their talent management initiatives, understanding that the very concept of ‘contingent labor’ does not mean what it used to,” said Christopher J. Dwyer, research director at Ardent Partners. “If 2015 was the tipping point for the contingent workforce’s growth and evolution, then 2016 is the year that the ‘gig economy’ propels it to new heights.”

The Ardent report surveyed employers on the ways they were adapting to the “new world of work,” how the future of work is impacting contingent workforce operations now and in the future, and how companies deploy workforce strategies.

Some of the report’s major findings include the following:

Best-in-Class Contingent Workforce Management Companies Deploy a Variety of Strategies to Outpace the General Market. Best-in-class companies excel in real-time visibility into spend- and supplier-led aspects of contingent workforce management (68 percent vs. 25 percent for all others), conduct regular reviews of worker and enterprise relationships (74 percent vs. 49 percent), leverage vendor management system platforms (72 percent vs. 46 percent), and maintain comprehensive onboarding and off boarding processes (79 percent vs. 55 percent).

Cost Savings is No Longer the Top Driver for Executing a Contingent Workforce Management Program. Several years ago, the report said, costs (currently at 32 percent) would have placed ahead of talent engagement (51 percent) on the priority scale. As the gig economy continues its rapid expansion, discovering new talent and managing compliance (62 percent) have taken on more important roles.

Job seekers, however, are hesitant to pursue the growing number of independent contractor opportunities with on-demand companies, such as driving for Uber or performing jobs through TaskRabbit, according to a study released by career network Beyond.

The Beyond survey found that 68 percent of respondents indicated that they would not work for an on-demand company or would maybe consider it depending upon their financial situation at the time. The gig economy in the U.S. has grown rapidly in recent years, creating more independent contractor opportunities for workers. However, this survey showed that the lack of legal rights and benefits for on-demand contractors are deterrents for job seekers.

According to the report, an overwhelming consensus of job seekers (79 percent) believe on-demand companies should consider their workers eligible for entitled legal rights and benefits under certain conditions, with 47 percent of respondents saying they deserve official employee status no matter what, and 32 percent saying they should be considered official employees if working more than 40 hours per week.

“While on-demand companies create unique opportunities, our survey clearly shows that the majority of job seekers would prefer to focus on a full-time job with benefits over a short-term job in the gig economy,” said Rich Milgram, chief executive officer of Beyond. “We all love the flexibility that the gig economy offers, but in reality we need the stability of a full-time position. Finding the right mix of the two is what we strive for in life.”

These figures coincide with similar findings by The Execu | Search Group. Its ‘2016 Hiring Outlook: Strategies for Adapting to a Candidate-Driven Market’ report found that 26 percent of hiring managers surveyed planned to increase hiring of temporary employees in 2016.

“With the U.S. unemployment rate at an eight year low, competition is fierce for skilled talent. That means it’s more important than ever that companies resolve to invest in the recruitment and development of top talent and explore creative, progressive staffing solutions,” said Joyce Russell, Adecco Staffing USA president.