Menu
View our Events
Stay Connected:
In many countries, alternative work models are increasingly winning favor. For companies, such arrangements are helping to fill the skills gap. Workers, meanwhile, are using gigs of all kinds to earn extra money and to learn new skills. 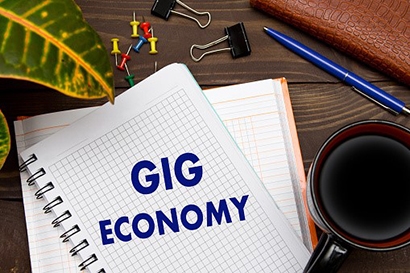 March 12, 2018 – Today, a growing number of workers are opting for alternative employment models over traditional, full-time, permanent roles. Part-time, contingent, contract, temporary, freelance, independent contractor, on-demand online and platform working – call it what you will, they are all on the rise. Businesses and those who work for them want choice, flexibility and alternative ways of working that build resilience for less predictable futures.

According to a new report by ManpowerGroup, 87 percent of workers will perform this kind of “NextGen Work” in the future. “The gap between the skills people have and those employers need is widening, polarizing workforces and populations around the world,” said Jonas Prising, chairman and chief executive officer of ManpowerGroup. “Companies have to find talent from new sources and do more to develop and keep their people engaged. At the same time, what people want is changing. They are working longer, learning more and seeking a better balance between work and home.”

Not everyone wants to engage as a full-time employee and organizations don’t always want that either, said Mr. Prising. “The ‘Monday-Friday nine to five job for life’ has moved on and much of the jobs growth over the last 10 to 15 years has occurred in non-traditional, alternative ways of working.” Still, the number of people working in gigs is but a small part of the labor force. “However, those seeking flexible, non-traditional ways of working are significantly greater,” said Mr. Prising.

Vice President, Recruiting, Wanted at Chase Bank
You will need to act as a recruitment subject matter expert to design & develop meaningful recruiting strategies to help the development of a qualified candidate pool, including the use of technology and alternative sourcing techniques. Apply now on Ezayo!

One is more inclined to see “NextGen Work” in countries with a higher proportion of younger workers, in particular younger Millennials (ages 18 to 24), said ManpowerGroup. India and Mexico lead the way with 97 percent of workers open to freelance, contract, temporary or independent contractor work. Mature markets, often with high levels of employment, are close behind. The U.S., with decades of entrepreneurialism and dynamic job flows, together with the flexible labor markets of the U.K., Italy and Australia all display an openness to alternative work models, encouraging job creation and providing more pathways into the workforce, said ManpowerGroup. Germany, Netherlands and Japan are more resistant to freelance work, while others are warming to greater flexibility following the global recession.

People want different types of careers at different times in their lives. Eighty-seven percent of the respondents said they would consider temporary work for their next job or in the future. And demand for gig work has risen consistently for decades. Across the European Union, temporary work almost doubled from eight percent to 14 percent from 1984 to 2017. In the U.S., it increased by 56 percent from 2005 to 2017 and continues to grow, said ManpowerGroup.

Why People Are Choosing Freelance Work

The most popular reason people choose gig work is to earn extra money, to supplement their income and do what they choose. Sixty-five percent of households in developed countries were earning the same today as they were in 2005 – and the recession, automation and low productivity continue to impact wages around the world. Women choose “NextGen Work” to earn additional income slightly more than men (39 percent vs. 37 percent) and young Millennials (18-24) are the most likely to choose freelance work to earn extra income, said ManpowerGroup. For many, gig work helps supplement salaries, savings or pensions, so people can find the time and money to do what they value most. For others, alternative work models allow them to use in-demand skills and earn top dollars for highly skilled contract positions.

Workers Continue Taking Side Gigs to Bridge Pay Gap
Got a side gig? You’re not alone. According to new CareerBuilder research, nearly a third of workers (32 percent) do, compared to 29 percent last year. And more women than men have side work — 35 percent versus 28 percent.

The second most popular reason people choose gig work is to learn new skills. Eighty percent of those ManpowerGroup surveyed see gig work as an opportunity to learn and use new skills. Whether formal company-driven development, on-the-job training or simply experience-based learning by doing, for most people work is a place to hone and improve skills. In the midst of a skills revolution, when 40 percent of employers cannot find the skills they need and 65 percent of the jobs younger Millennials (18 to 24) will do don’t exist yet, acquiring new skills and experiences has never been more important to remain employable. Older Millennials (25 to 34) say they choose “NextGen Work” to develop their skills than any other generation. Men also prioritize skills development slightly more than women, while women are more likely to choose gig work to balance their time and try out different roles. It will be skills development too that helps the 19 percent who feel “NextGen Work” is their only option at the moment, to expand their employability and future choices.

Globally, nearly 40 percent of people say schedule flexibility – especially flexible start and finish times and the ability to work from home – is one of the top three factors when making career decisions, said ManpowerGroup. For many people, the ability to balance caring responsibilities can make the difference between working or not. Both men and women aged 25 to 39  are just as likely to choose gig work so they can spend more time with family.

A possible reason for the rise of the gig / on-demand / hourly economy might be that companies find the use of temporary / contract workers to be a new approach to business structure and employment. This approach has been on the rise, with companies utilizing such workers to fill positions at a time when talent shortages seem widespread.

A recent study released by Randstad US found that as early as 2019 as much as 50 percent of the workforce will be made up of agile workers. Nearly four in 10 workers (39 percent) said they are likely to consider shifting to an agile arrangement over the next two to three years. This movement is fueling an equally aggressive adoption of new workforce models that tap into both permanent and agile employees to combat staffing shortages, leverage globalization and fuel greater innovation for organizations.

A separate study from CareerBuilder and Economic Modeling Specialists International concluded that hiring temporary and contract employees can help businesses sidestep talent gaps and remain nimble. The study showed that more companies will be tapping into this labor segment, with temporary employment expected to add 173,478 jobs from 2016 to 2018 – an increase of 5.9 percent.