Stay Connected:
Companies expect to soon shift a third of their permanent jobs to freelancers and part-timers, according to a new survey. That’s good news, except when it’s not. Let’s explore the rise of the flexible workforce and what it means for all of us. 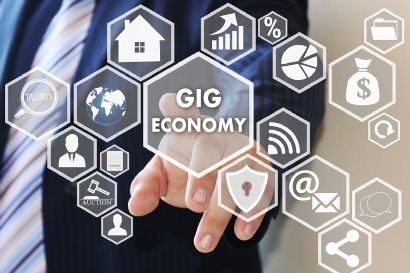 December 13, 2017 – More than half of human capital leaders from around the world expect to transfer one third of their permanent positions to contingent roles in the near future, according to Randstad Sourceright’s new Talent Trends report.

Based on a survey of more than 700 global human capital leaders, Randstad Sourceright found that 61 percent of employers plan to replace up to 30 percent of their permanent positions with freelancers, gig workers and independent contractors to become more agile and flexible in the changing economy. Nearly 40 percent of employers surveyed said they believed that they can reduce the impact of talent scarcity by having an integrated hiring strategy.

Nearly 70 percent of employers surveyed said they believe the skills gap is widening and will create significant challenges in the near future. That is why a vast majority of companies agree that all available resources should be considered to combat recruitment challenges.

“HR departments have quickly realized they can no longer stick to business as usual if they hope to hire top talent in the 21st century,” said James Stovall, Randstad Sourceright’s senior vice president of solution design. “By implementing an integrated talent approach — where permanent, contingent, independent and machine labor are engaged strategically — companies can improve their workforce agility by having access to the right talent at the right time.”

Workers Continue Taking Side Gigs to Bridge Pay Gap
Got a side gig? You’re not alone. According to new CareerBuilder research, nearly a third of workers (32 percent) do, compared to 29 percent last year. And more women than men have side work — 35 percent versus 28 percent.

Additional findings from the Randstad survey include:

A possible reason for the rise of the gig / on-demand / hourly economy might be that companies are finding the use of temporary / contract workers to be a new approach to business structure and employment. This approach has been on the rise, with companies utilizing such workers to fill positions at a time when talent shortages seem widespread. Here’s some further reading from Hunt Scanlon Media.

A recent study released by Randstad US found that as early as 2019 as much as 50 percent of the workforce will be made up of agile workers, as nearly four in 10 (39 percent) workers said they are likely to consider shifting to an agile arrangement over the next two to three years. This movement is fueling an equally aggressive adoption of new workforce models that tap into both permanent and agile employees to combat staffing shortages, leverage globalization and fuel greater innovation for organizations.

But according to Rick Gray, chief executive officer of Chicago-based TalentRISE, it is useful to reflect on past trends and to consider what lies ahead. “There are pros and cons of an ‘on demand’ workforce,” he said. “In seasonal industries, it may be ideal and is not a new concept.” As CEO of an expanding recruitment consulting and talent solutions business, he said TalentRISE itself has leveraged on-demand talent by deploying a network of specialized recruiters for urgent client hiring needs.

The cons, he said, can include the erosion of loyalty and pride, the risk of a workforce of pure multi-taskers and no specialization, and perhaps even an entire generation running from gig to gig with little financial stability. “If this trend is inevitable,” he asked, “then how might it impact talent acquisition in the long run?” The end goal, he said, of getting the best workers deployed most quickly at the least cost possible will not change. “But how we all get there will,” he said.

According to another report by CareerBuilder, hiring temporary and contract employees can help businesses sidestep talent gaps and remain nimble. The study shows more companies will be tapping into this labor segment, with temporary employment expected to add 173,478 jobs between 2016 and 2018, an increase of 5.9 percent.

“Today, nearly three million people are employed in temporary jobs, and that number will continue to grow at a healthy pace over the next few years as companies strive to keep agile in the midst of changing market needs,” said Mr. Braun. “Opportunities are opening up in a variety of occupations and pay levels, and this is a trend we’re seeing in a wide range of industries and company sizes.”