Menu
View our Events
Stay Connected:
Female leadership continues to lag at U.S. companies. In fact, women hold just 10 percent of the top executive roles and most working beneath the CEO level are in positions that are less likely to lead to the top. Here’s the backstory. Tory Clarke, partner and co-founder of Bridge Partners, then weighs in. 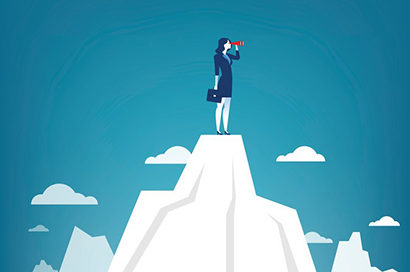 July 17, 2018 – Despite the advances women have made in today’s workplace, they still account for just a small share of top leadership posts. That’s true in politics and government, academia, the non-profit sector and particularly business.

Women held only about 10 percent of the top executive positions (defined as chief executive officers, chief financial officers and the next three highest paid executives) at U.S. companies last year, according to a Pew Research Center analysis of federal securities filings by all companies in the benchmark Standard & Poor’s Composite 1500 stock index. And at the very top of the corporate ladder, just 5.1 percent of CEOs of S&P 1500 companies were women.

In addition, only 651 (11.5 percent) of the nearly 5,700 executives under the CEO level (positions such as chief operating officer and CFO) were women. Although this group in general constitutes a significant pool of potential future CEO candidates, the women officers Pew Research identified tended to be in positions such as finance or legal that, previous research suggests, are less likely to lead to the CEO’s chair than other, more operations-focused roles.

Knowledge / Research & Administrative Professional Wanted!
This search firm seeks an individual who will partner with the firm through every stage of the search process – from the creation and development of pitch materials, strategic target lists and candidate pools, cold calling/name generation, high-level database queries and reporting, web research, sourcing, and more. Apply on Ezayo!

The Pew Research findings were based on numbers provided by the SEC, which requires companies to report detailed pay information for their CEO, CFO and the next three highest paid executives. Collectively referred to as “named executive officers,” this group is often considered by leadership researchers to be the equivalent to a company’s top management team; they not only include the CEO but are a reservoir of potential CEOs, either for their own company or another one. Pew Research looked at CEOs and non-CEO top executives separately.

Where Women Are Excelling Most

The share of non-CEO top executives who were women differed little by company size, but did vary considerably by broad sector and specific industry. Utilities had the highest share of women in such positions with 17.3 percent. The sector also had the biggest share of female CEOs, with 10 out of 54 or 18.5 percent.

In the consumer discretionary sector, a diverse category that includes makers and sellers of everything from cars to handbags and service providers ranging from hotels and restaurants to wedding planners and broadcasters, 16.1 percent of non-CEO top executives were women. By comparison, only three of the 50 non-CEO top executives identified by the 13 telecommunications companies in the index, or six percent, were women. Telecom also was the only sector with no women CEOs. 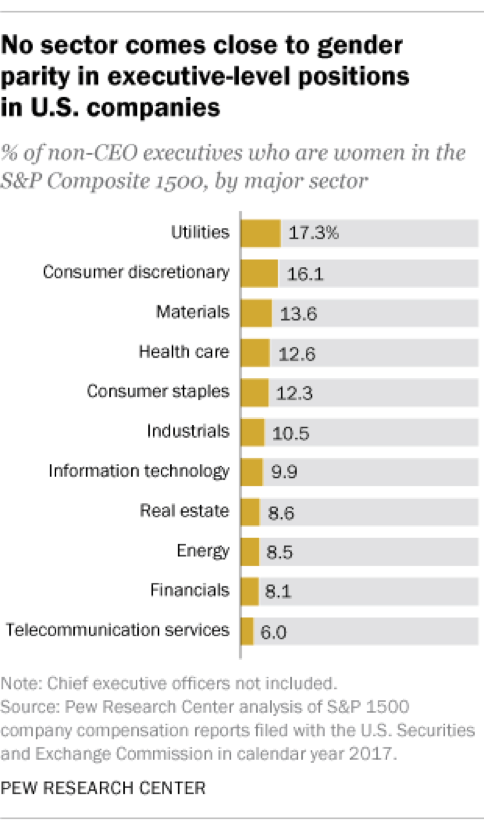 What Roles Do Women Hold

What specific positions did women hold? Pew Research Center’s analysis found them to be highly concentrated in just a few types of corporate jobs: 168 (25.8 percent) were the CFOs of their companies, while another 19 held other finance positions, such as controller or chief accounting officer. Women, in fact, made up 11.2 percent of all CFOs, vs. 5.1 percent of CEOs. Nearly a quarter (23.7 percent) of the female second-tier executives were corporate general counsels or chief legal officers, and nearly 10 percent were chief human resources officers or the equivalent.

In addition, 47 women non-CEO top executives (7.2 percent of the total) were designated president, COO or a similar title, and 96 (14.7 percent) were the heads of major subsidiaries or operating divisions. “The relative scarcity of women in high-level operational roles may be significant, because management researchers have found that, generally speaking, companies and their boards (who formally appoint the CEO) prefer to have people with operational experience in the top spot,” the Pew Research Center said.

The executive recruiting firm Crist|Kolder, for instance, found that more than three-quarters of CEOs at large U.S. companies had been either COOs, divisional presidents or operating executives immediately before getting the top job; 6.7 percent had been CEOs at other companies, while 4.1 percent were founders. Only about 11 percent had gone directly from CFO or some other top executive job to the CEO chair.

omen in the C-Suite Still Lagging Behind Male Counterparts
The percentage of women in most C-suite positions is dramatically lower than their male counterparts, according to a new report by Korn Ferry. The study examined the percentage of women by title and industry and provides an update to a similar report the firm released last year.

“The lack of diversity in senior leadership roles is a perennial issue that requires a long-term lens,” said Tory Clarke, partner and co-founder of Bridge Partners. “If we work on the assumption that a private sector organization can see the business imperative behind a diverse leadership and an inclusive culture (which, shockingly, data shows is not a given assumption, even today) they can retain executive search firms to ensure that every new hire to the leadership team maximizes the opportunity to diversify – but this is a short-term solution.”

The longer-term and sustainable solution, she said, lies in talent development and retention. “The finding by Pew that women are mainly positioned in functional leadership roles that tend not to lead to the CEO’s chair is not a new one but is key to the challenge.”

So what can be done? Ms. Clarke said that organizations must take care to seed their CEO candidate pool with women, “not by simply finding the most senior women in their organization and identifying them as potential but unlikely CEO successors (which is simply window-dressing), but by turning the equation around and ensuring that the pipeline to roles that are most suited to CEO succession are populated with women, and that those women both want to be the next CEO, and are retained and developed in a way that ensures they stick around for the opportunity, when it arises.”

Ms. Clarke said that “sounds like a simple solution but you would be surprised how many organizations look at diversity in succession planning as a numbers game, rather than considering five to seven years ahead how to make sure that, at any given time – crisis or planned succession – the CEO pipeline is diverse by every measure.”