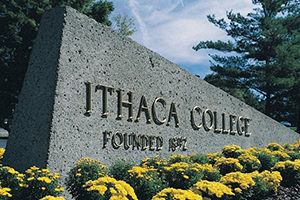 April 30, 2018 – The hunt for university leadership has been heating up, especially with searches for provosts. Ithaca College recently named La Jerne Cornish as its new provost and SVP for academic affairs. Witt/Kieffer was enlisted to conduct the assignment. Dr. Cornish joins the school in July, succeeding Linda Petrosino.

“La Jerne Cornish’s rich experience as a leader in higher education has been marked not only by her dedication to academic rigor and excellence, but by an equally tenacious commitment to going about her work in an inclusive, cooperative way,” said Shirley M. Collado, president of Ithaca College. “She is skilled at finding ways to advance institutional priorities in lean-resource environments, and she will be a trusted, talented partner to me, to the senior leadership team and to our deans and faculty as we continue to develop the quality of the Ithaca College academic experience.”

Dr. Cornish spent the first 15 years of her professional career as a teacher and administrator in the Baltimore public school system, of which she herself is a product. She taught English in three middle schools, piloted the Maryland’s Tomorrow Middle School Program and served as assistant principal of Canton Middle School. For the past four years, Dr. Cornish has been associate provost of Goucher College, where she oversaw all aspects of the undergraduate program, including coordinating academic advising and providing oversight for the Academic Center for Excellence and the Maryland Scholars Program.

“Dr. Cornish’s lengthy work both in K­–12 and higher education administration, combined with her documented track record to inspire faculty to work together to effect change at a tuition-dependent institution, bodes well for Ithaca College,” said Jack Powers, associate professor of media arts, sciences and studies.

“She brings extensive experience in promoting student success initiatives, as well as a strong record on successful programs to build an inclusive environment for both faculty and students,” said Jean Hardwick, Dana professor of biology. “Her experiences as both the faculty chair – elected by her colleagues – and as associate provost, demonstrate her ability to work effectively with multiple constituencies to build coalitions and bring about meaningful and lasting change.”

As the college’s chief academic officer, Dr. Cornish will report directly to the president and is expected to play a significant role in strategic planning and implementation. The deans of the college’s five schools – Business, Communications, Health Sciences and Human Performance, Humanities and Sciences, and Music – report to the provost, who has responsibility for supporting and advancing the teaching, scholarship and development of faculty and for all matters related to academic programs and curricula.

José Bowen, president of Goucher College, said Dr. Cornish made a significant impact during her tenure there. “La Jerne has been an integral leader of the Goucher community for 35 years, first as an undergraduate and graduate student, then as a professor, associate provost and parent,” said Dr. Bowen. “No one could have been a greater supporter of Goucher College or of our students, and I know she will bring the same commitment, enthusiasm and aspiration to Ithaca. Her wisdom and dedication will be missed, but we know she will do equally meaningful work at Ithaca.”

Ithaca College is a coeducational, nonsectarian private college located Ithaca, NY. The school was founded in 1892 as a conservatory of music. It has a strong liberal arts core, but also offers several pre-professional programs and some graduate programs.

The college is also working with Witt/Kieffer to select the vice president for finance and administration and the school’s general counsel.

Wright State University in Fairborn, OH, has turned to Greenwood / Asher & Associates to lead its search for a new provost. Thomas Sudkamp is stepping down from his role at the end of June, and the school hopes to find his replacement by that time. President Jan Greenwood and vice president Betty Turner Asher are leading the assignment.

Higher Education Leadership Search has been selected by Northeastern State University in Oklahoma to help find a new provost and vice president of academic affairs. Consultants Bill Meehan and Alan Medders are leading the assignment. Candidates must hold a doctorate or other appropriate terminal degree and will have a distinguished record of scholarship …