Stay Connected:
Russell Reynolds Associates takes an in-depth look at the factors most important to weigh when it comes to board leader performance and recruiting top directors. Let’s go inside the new report. 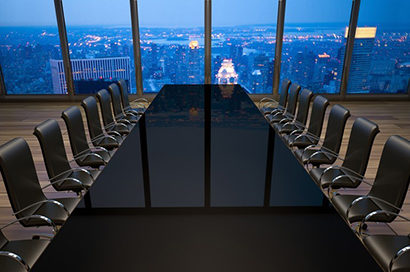 December 3, 2018 – A recent Russell Reynolds Associates report examined the recruitment of board leaders by comparing the characteristics of directors at 50 top-performing S&P 500 companies against those at the 50 worst-performers, based on total shareholder returns over a three-year period. Surprisingly, few differences emerged, suggesting qualitative factors play a bigger role than age, board tenure or other past experiences.

So, what makes a great board leader – and how do you know? When U.S. boards look for a new non-executive leader – or a director candidate who could fill that role when the time comes – they often try to identify ideal candidates by looking at backgrounds and experiences, said the Russell Reynolds report, which was co-authored by P.J. Neal and Alix Stuart from the firm’s Center for Leadership Insight.

Russell Reynolds Associates’ “Board Culture” survey showed that the strength of the chair was the single biggest differentiator between the most and least effective boards. What is often unclear, however, is how closely the shorthand criteria used to select a chair actually relate to a board’s subsequent performance.

The study found that there is a surprising lack of measurable difference between the two groups. Looking at both medians and averages, the leaders of both top and bottom performers were nearly identical in just about every variable Russell Reynolds studied.

So, what does matter in identifying a good candidate to lead a board? The results make it clear that it’s not what a director has done earlier in their career or how long they have been a director, said the search firm, but how they act in the boardroom.

When a board is choosing a lead director or independent chairman from among its members, “you’re looking at the style and characteristics of a fellow director: how active they are on the board, how they interrelate with other members of the board and the CEO, and their ability to lead, particularly when it comes to drawing out quieter members,” said Charles A. Tribbett, co-head of Russell Reynolds’ board & CEO advisory group.

Measuring a board’s performance is a difficult and imprecise exercise. Non-financial metrics, such as board composition, committee structure or number of meetings attended are relatively easy to track, but do not always translate into meaningful results, said the report. Financial performance such as profit growth or investment returns are more to the point, but they hinge on any number of factors beyond the board’s control, from industry dynamics to operational efficiencies to the willingness of a CEO to listen.

Russell Reynolds measured board effectiveness via first-hand feedback, asking 369 public-company directors from a dozen countries to rate their boards in a survey. The firm wanted to explore whether any external measure might indicate board effectiveness. With the various constraints of financial measures in mind, the recruiting firm chose to look at Total Shareholder Return (TSR), or the change in share price between two dates, taking into account any dividends or stock splits that may have occurred over that time.

Russell Reynolds then took a close look at the independent directors whom the boards had chosen as leaders – either non-executive chairmen or lead directors – for companies with the highest 50 TSR, as well as those with the lowest 50 TSR. Those in the top group were at companies that earned shareholders double- and triple-digit returns over the course of 2015 to 2017 (an average gain of 140 percent), while those in the bottom group universally lost money for shareholders over that time (an average loss of 23 percent).

Russell Reynolds ranked S&P 500 companies by Total Shareholder Return and then analyzed a total of 137 companies (67 top performers and 70 bottom performers), excluding boards which had a recent leadership transition or which did not have an independent leader, to arrive at the top 50 and bottom 50. The final lists represented a variety of industries, with the top 50 dominated by technology (22 percent), industrials (18 percent) and healthcare (18 percent) companies and the bottom 50 led by consumer (30 percent), healthcare (16 percent) and energy (14 percent) companies.

What the Numbers Say

Russell Reynolds first looked at titles of the non-executive board leaders, often a controversial topic among U.S. governance experts. While conventional wisdom once held that an independent board chair was superior to a lead director, the data showed no correlation between board leadership structure and TSR. Seventy percent of top 50 companies used lead directors compared to 68 percent of bottom 50 companies. The balance — 30 percent of the top 50 and 32 percent of the bottom 50 — used independent chairmen.

The search firm also observed that board leadership structures are often in flux, with companies choosing to combine or separate the CEO and chair roles based on CEO transitions and director availability. At least 10 percent in each group made changes to their structure in the past three years.

Over the years, the question that has become more relevant than what the independent board leader is called is what he or she does. “You always have to ask if the board leader is setting the agenda and running the meetings so they can bring in different points of view and enable dissent – or simply nodding at the CEO’s agenda,” said Anthony Goodman, a member of RRA’s board & CEO advisory group.

In line with that, the data showed some evidence that the absence of an independent leader of any sort – an increasingly rare practice – may be detrimental. Six companies among bottom performers used only executive leaders, who often held substantial ownership stakes in the company, compared to just two companies in the top group.

Russell Reynolds then looked at other statistics, such as age, board tenure and compensation. Similar to board leadership structure, most of these other factors varied little between top and bottom performers. 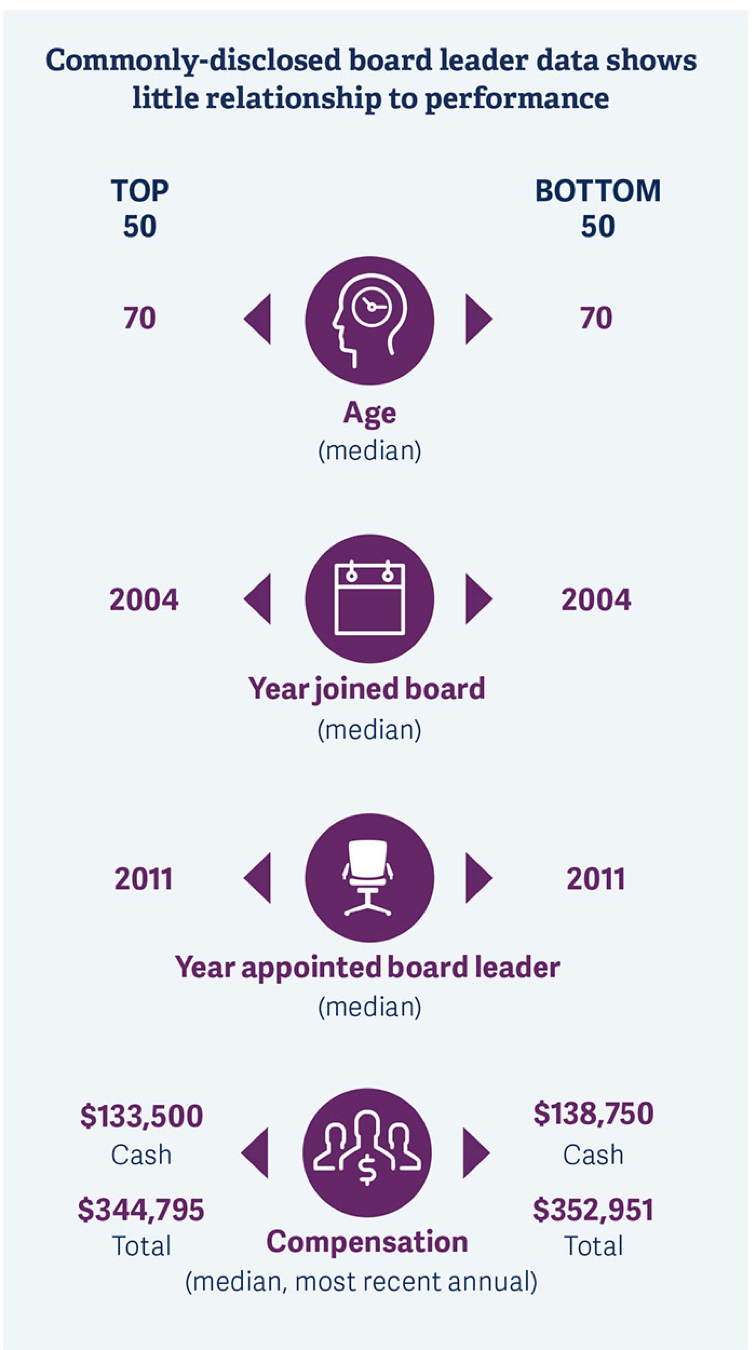 Does a Board Leader’s Background Matter?

The data showed a slight difference here: 40 percent of board leaders in the top group had past or current experience as a public-company CEO, compared to 34 percent in the bottom group. 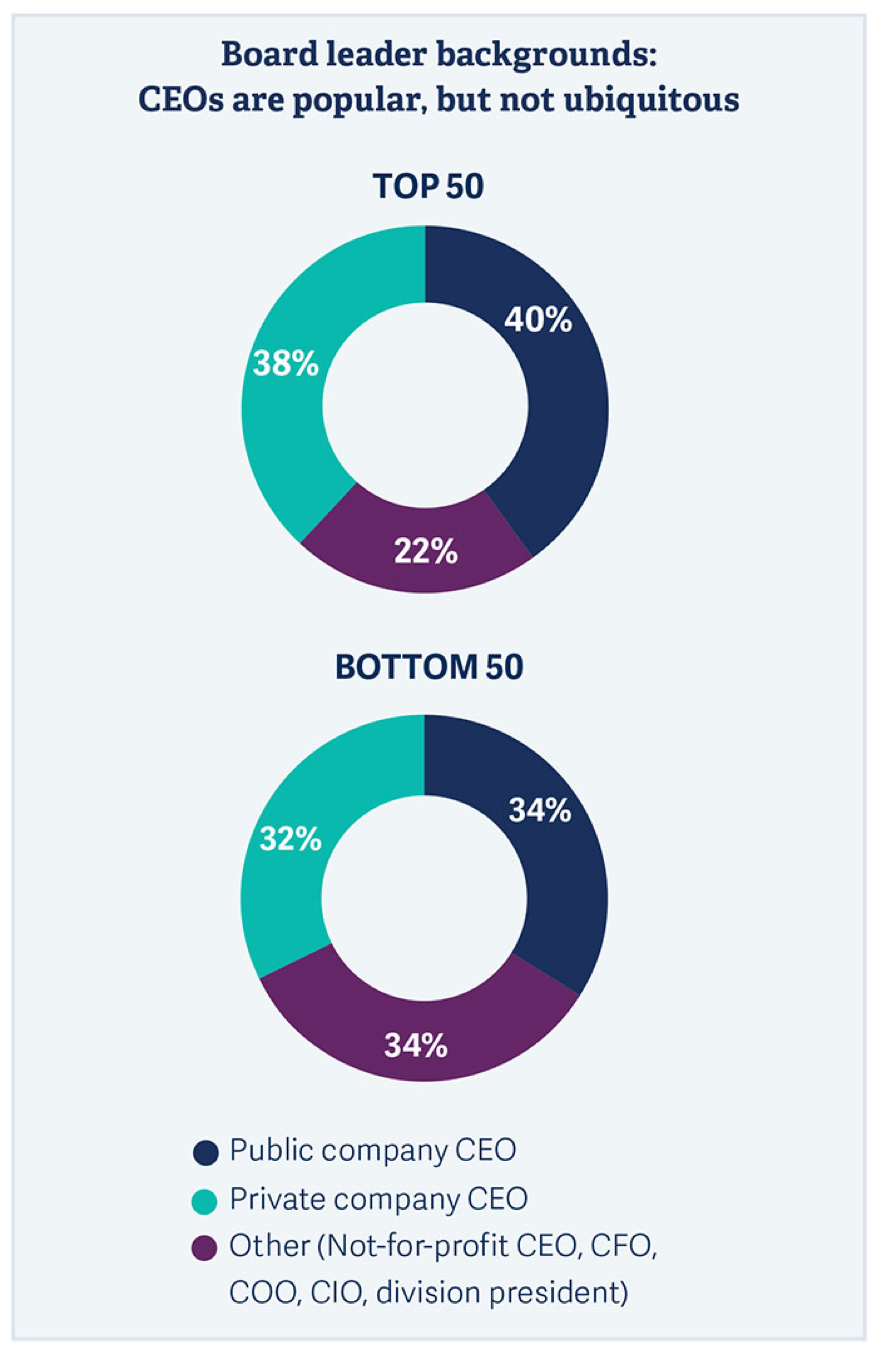 Public-company CEOs are often the first choice for a board leadership position, in part because their experience makes them well-suited to represent the company to investors. “The first question is always: Who would an institutional investor most like to meet with and spend time with? Who is the most credible person?” said Mr. Tribbett.

Board members who have been public company CEOs themselves may also be seen as better sounding boards for the current CEO, particularly if that person is a first-time CEO, Russell Reynolds said. “However, this experience is clearly not a universal requirement, as the majority of board leaders at both top- and bottom-performers have not been public-company CEOs.”

Russell Reynolds also found two small trends that offer interesting points of differentiation between top and bottom 50 board leaders’ backgrounds. For one, 18 percent of top performers have a leader with venture capital or private equity experience, about twice the level of bottom performers. Secondly, top performers are about half as likely as bottom performers to have a leader whose only other board leadership experience is as an executive chairman. Taken together, these trends suggest that the best board leaders are skilled at bringing external, objective perspectives to the group, helping them see the company as a shareholder would.

Intangibles that Matter Most

The most important intangible in choosing a board leader is his or her chemistry with the CEO. “If the board members like this person but the CEO can’t stand them, they’re not going to be very successful,” said Mr. Goodman. “Beyond that highly subjective criteria, however, a number of other personal qualities can help predict how well someone will do in the role of independent chairman or lead director.”

When directors rated their leaders in RRA’s “Board Culture” survey, they pointed to three hallmarks of effective chairs: They encourage independence, they actively seek different points of view, and they foster high-quality debates.

Similar themes came through in the firm’s conversations with consultants who specialize in board leader searches in the U.K., where nearly every large public company has an independent chair for regulatory reasons, and such chairs are often appointed with no prior experience on the board they are to lead.

When considering a recently retired CEO, for example, a top question involves “whether the person is ready to take his or her hand off the steering wheel; “capable of fostering high-quality debates rather than making unilateral decisions, said Zoe Gibson, a senior member of RRA’s board and CEO practice in London. Some signs of that readiness might be that the CEO has invested in grooming internal succession candidates, and/or has a successful business track record that has ended on a high note, leaving the person with nothing to prove.

“To adequately seek different points of view, board leaders should also be great listeners, ideally with an exceptional ability to recall who contributes what to the board discussions,” said Emma Combe, also a member of the board and CEO practice in London. “Especially with today’s diversity agenda, you want to make sure everyone gets equal share.”

Finally, when it comes to promoting independence, courage is crucial, said Russell Reynolds. Board chairs who cannot strike the balance between encouraging and challenging the CEO – or other board members when necessary – are almost certain to fail when difficulties arise.

5 Signs of a Bad Board Leader

To help put those positive qualities in perspective, Russell Reynolds asked experts what defines the people who fail in board leadership roles.

To avoid these less-than-optimal behaviors, said Russell Reynolds, boards should consider the following questions for board members approaching a leadership transition:

“Ultimately, choosing a great board leader is part art and part science,” Russell Reynolds Associates said. “As board structures and corporate governance standards continue to evolve, the role of the independent board leader is only likely to grow more important. Directors face a difficult decision each time they make a transition, but with the right framework and analysis, can make excellent choices every time, to the benefit of the board, the company, and shareholders.”