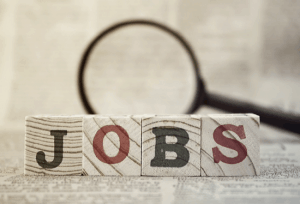 November 7, 2016 – Employers added a solid 161,000 jobs last month as the U.S. unemployment rate fell slightly to 4.9 percent in what is the last piece of economic data before tomorrow’s big election. According to the most recent U.S. Bureau of Labor Statistics report, the number of workers unemployed also dropped to 7.8 million. This report follows the addition of 156,000 jobs added in September.

Thus far in 2016, employment growth has averaged 181,000 per month, compared with an average monthly increase of 229,000 in 2015. In October, employment continued to trend up in healthcare, professional and business services, and financial activities. But job growth has been relatively consistent month after month, all pointing to good times ahead as more Americans go back to work.

The two presidential campaigns of Hillary Clinton and Donald Trump, as expected, weighted in on the latest unemployment report with contrasting views on how the economy has performed in recent years.

Jacob Leibenluft, a senior policy adviser to the Clinton campaign, told reporters: “Another reminder of the progress we’ve made since the financial crisis: the longest streak of overall job growth on record, an unemployment rate below five percent and wages growing at their fastest pace since the recession.”

Stephen Miller, Mr. Trump’s national policy director, called the Labor Department report “disastrous” and that it represented “the total failures of the Obama-Clinton economy that delivers only for donors and special interests and robs working families.” Not even good news, it seems, can unite these two candidates in one of the ugliest election battles of all times.

According to the New York Times, Mr. Trump at a rally in New Hampshire labeled the latest jobs report “an absolute disaster,” and said “nobody believes the numbers anyway.”

“Regardless of the outcome at the presidential level, we see the job market continuing to hold steady for the foreseeable future,” said Dan Ryan, principal at Ryan Search and Consulting, providers of talent acquisition and development services in the architecture, engineering, construction, manufacturing, healthcare and retail fields.

Mr. Ryan, however, believes that upcoming house and senate elections could impact those favoring pro-labor. “Shifts in the makeup of the house or senate might have an influence on this, especially if either moves toward the Democratic side,” Mr. Ryan said. “This might provide an opportunity for more pro-labor initiatives or other types of legislation that could put more of a burden on the employment process.”

When there is uncertainty in the economy, there is a tendency to display patience, and wait, or do nothing. When that occurs, employers are more likely to turn to temporary professionals or contractors until the market shows improvement. This trend cropped up in the current employment report.

The latest labor report found that the number of job losers and persons who completed temporary jobs declined by 218,000 over the month to 3.7 million. The number of long-term unemployed (those jobless for 27 weeks or more) was unchanged at two million in October and accounted for 25.2 percent of the unemployed.

Yet the use of temporary workers in the ‘gig’ economy, a new approach to business structure and employment, has been on the rise with companies utilizing these types of workers to fill positions during a time where talent shortages seem wide spread.

A separate study from CareerBuilder and Economic Modeling Specialists International, concluded that hiring temporary and contract employees can help businesses sidestep talent gaps and remain nimble. The study shows more companies will be tapping into this labor segment, with temporary employment expected to add 173,478 jobs from 2016 to 2018 – an increase of 5.9 percent.

These figures coincide with similar findings by an Adecco study, ‘Definitive Guide to Building a Better Workforce,’ which found that 67 percent of companies use contingent labor to enhance their workforce and close talent gaps. The study surveyed 536 C-suite executives across the U.S. regarding the types of talent they need, skills that are most difficult to find, how they are using contingent labor and progressive recruiting methods to enhance their workforces, employee retention techniques and more.

Despite the increased use of temporary workers to fill talent gaps, employers are also looking to increase the hiring of full-time employees. Thirty four percent of employers plan to add full-time, permanent employees in Q4, on par with last year, according to CareerBuilder’s Q4 2016 ‘U.S. Job Forecast.’ Nine percent expect to reduce staff, similar to 10 percent last year, while 53 percent anticipate no change and four percent are unsure.

“Employers are optimistic, though hesitant, with their hiring intentions and we’re pleased to see levels we were seeing before the recession,” said Kip Wright, senior vice president of Manpower North America. “While employers are looking to grow their workforces, many are challenged to find candidates with the right skills. As the hiring outlook continues to improve, attracting and retaining skilled talent will become even more difficult.