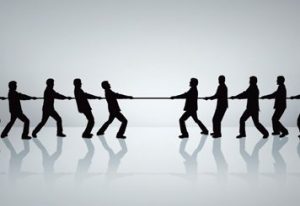 November 7, 2016 – One fourth of American businesses have experienced a surge in talent raids, but most companies have done nothing about protecting themselves. In fact, 54 percent are virtually defenseless against corporate poaching, according to a recent co-branded study by Hunt Scanlon Media and leadership advisor Marlin Hawk. And all indications are that the problem isn’t going away anytime soon.

“What surprised me the most was not the prevalence of talent raids, but how unprepared the majority of companies are to counteract them,” says Mark Oppenheimer, Marlin Hawk’s chief innovation officer, speaking about the report. “Given the amount of time, effort, and financial investment put into finding and hiring key executives, I would expect employers to think carefully about building the optimum environment to retain their most valuable people.”

The fact that almost 60 percent of companies have no formal talent retention strategy in place is quite alarming, he says, especially since many market commentators expect demand for outstanding talent to soon outstrip supply.

Nearly 400 leading CHROs and top talent acquisition leaders participated in the new report. It is among the first studies to explore this unique and growing dilemma in an era in which recruitment has begun to carry less weight with companies than issues like employee engagement, succession planning, and retention. For a free download of the report please click here: https://huntscanlon.com/wp-content/uploads/2016/11/Talent-Raid-White-Paper_FINAL.pdf

Obviously, individuals are going to leave their job for another position now and then, says Mr. Oppenheimer. That’s human nature. And while businesses have processes and systems in place to deal with issues revolving around pay and contracts, it is in the area of human behavior that most begin to falter.

“Many companies know how to deal with the tangible issues,” Mr. Oppenheimer says. “They identify their top talent, conduct compensation benchmark studies, ensure that the executive team is competitively compensated, tie them in with long-term incentive plans and put the non-compete contracts in place. But dealing with talent is very different from financial assets or intellectual property. Companies do not tackle the soft issues that are equally important to people, especially with the Millennial generation.”

It’s a pitfall that most likely reaches beyond American shores. “I suspect the same applies globally, as the U.S. is more sophisticated in its HR than many regions of the world,” says Mr. Oppenheimer. “Perhaps this ought to be our next survey – looking at talent raiding from a global perspective.”

Some may be skeptical about search firms working to protect client companies against talent raiders when as often as not they are the ones aggressively trying to lure away top talent. And though Mr. Oppenheimer agrees that executive recruitment firms campaigning for talent retention might seem hypocritical, that’s not necessarily the case.

“We genuinely want to protect the great hires we make for our clients,” he says. “That’s why we make such a big deal about preparing to onboard candidates and integrating them post-placement. In our role, we talk to a broad range of candidates and gain valuable insights into why people want to stay with their current company or move on. We can’t work miracles, but we can bring our insights to the table and partner with clients in developing strategies to maximize executive talent retention.”

Where CHROs Must Now Spend Their Time

“While recruiting will always be one of the key pillars of HR, there will be more of a balance in the future,” Mr. Oppenheimer predicts. “We have already seen this happen, to a degree, over the past five years with an increase in employee engagement activities. Retention is really an extension of that drive to create the perfect working environment for staff at all levels.”

Making Your Company a Great Place to Work

For CHROs, talent retention is a challenge that speaks to the people-person nature of their job. They will have to look beyond compensation and the like and consider the other factors that make a person want to stay in their job, or leave.

“In a way, it’s all about going back to basics and wearing the psychiatrist’s hat, understanding the less tangible things that drive people and make them stick with the same tribe,” says Mr. Oppenheimer. “You have to make your company a great place to work, a club that people want to be part of. Then you have to put some process around it to ensure that retention ‘best practice’ becomes part of your corporate fabric.”

In tackling talent retention, Mr. Oppenheimer recommends that CHROs identify and pay attention to executives who may be susceptible to poaching. It’s critical to look hard at the individuals and the workplace issues that matter to them.

“Disaffection may be caused by someone’s role being impacted by a merger or organizational restructuring, or by their budget being cut or a project resulting in an unsuccessful conclusion through no fault of their own,” he says. “Be vigilant and acknowledge such obstacles, letting the affected executive know that you are aware and care – show them a positive outcome to alleviate the situation.”

CHROs might also consider providing a regular forum for key executives to air their frustrations before troublesome issues grow out of hand. “Top senior performers can still benefit from mentoring, preferably from someone at a similar level who can be objective, such as the CHRO or a non-executive director,” Mr. Oppenheimer says. “It may be that an executive feels that promises are not being fulfilled, or that time consuming projects are derailing achievement of objectives. Early identification of a problem provides an opportunity for resolution before it becomes too late.”

Mr. Oppenheimer believes executive recruiters and talent acquisition leaders would do well to come together to take on talent retention and other talent management challenges. “If clients are willing to let us in, we can work as an extension to the HR function, bringing an external perspective that adds real value and developing practices and processes that help lock in the people you most want to stay,” he says.

“We all have to accept that while more effort can be made to hold on to key executives, talent will at some point leave, and natural evolution will also create gaps,” he says. There’s an obvious opportunity to partner with search firms for succession planning, building a shadow board across each senior position, with coaching and upskilling to fast track potential replacements. In tandem, he notes, search firms can develop an external pool of talent as a contingency plan, lining up high caliber leaders with the potential to replace key executives.

Some companies may be wary that search firms have no allegiance to them beyond any given assignment. Most recruiters, however, want to foster strong ties with client companies, not alienate them. “There may be a few unethical search firms out there that, given the chance, would poach an executive as soon as they had received payment for placing them,” says Mr. Oppenheimer. “But most are not like that and place great importance on long-term relationships built on trust and complementary expertise.”