Stay Connected:
Gone are the days when most people in the workforce held a regular job for just one company. Today, independent workers are changing the face of the working world, according to a study by the McKinsey Global Institute. John Thacker, a partner with Beecher Reagan Advisors, weighs in on the gig economy’s impact on recruiters. 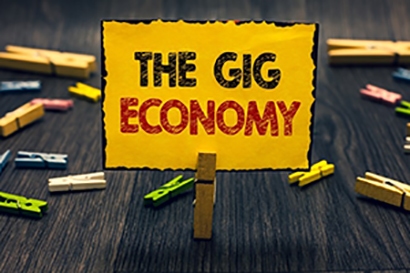 December 13, 2018 – Working nine to five for a single employer bears little resemblance to the way a substantial share of the workforce makes a living today. Millions of people pull together various income streams and work independently, rather than in structured payroll jobs. This is hardly a new phenomenon, yet it has never been well measured in official statistics — and the resulting data gaps have prevented a clear view of a large share of labor-market activity.

A report by the McKinsey Global Institute (MGI), however, is shedding light on the independent workforce and what motivates people who take part of it. “Those who do independent work by choice (free agents and casual earners) report greater satisfaction with their work lives than those who do it out of necessity,” said the study, “Independent Work: Choice, Necessity and the Gig Economy,” by a six-author team of McKinsey experts. “This finding holds across countries, ages, income brackets and education levels. Free agents reported higher levels of satisfaction in multiple dimensions of their work lives than those holding traditional jobs by choice, indicating that many people value the nonmonetary aspects of working on their own terms.”

MGI, the business and economics research arm of McKinsey & Company, surveyed 8,000 respondents across Europe and the U.S. Individuals were asked about their income over the past 12 months — encompassing primary work, as well as any other income-generating activities — and about their professional satisfaction and aspirations for work in the future.

The report was written by James Manyika and Jacques Bughin, directors of MGI; Susan Lund, a partner at MGI; Jan Mischke, a senior fellow at MGI; Kelsey Robinson, an associate partner in McKinsey’s San Francisco office; and Deepa Mahajan, a consultant in the company’s Silicon Valley office.

In this latest episode of ‘Talent Talks,’ host Andrew Mitchell is joined by John Thacker, partner at Beecher Reagan Advisors. In this exclusive podcast, Mr. Thacker outlines the pros and cons of being an independent worker in today’s workforce, and how gig workers fit into today’s work culture. According to Mr. Thacker, the gig workforce allows companies to scale up or scale down as needed. Gig work also allows individuals the flexibility to take on projects at their convenience. Listen now.

“Independent work is rapidly evolving as digital platforms create large-scale, efficient marketplaces that facilitate direct and even real-time connections between the customers who need a service performed and the workers willing to provide that service,” said MGI. “Today, just 15 percent of the independent workers we surveyed have used a digital platform to find work, but the so-called on-demand economy is growing rapidly.”

While this digital transformation unfolds several other forces could fuel growth in the independent workforce, said the authors. Among them: the stated aspirations of traditional workers who wish to become independent, the large unemployed and inactive populations who want to work, and the increased demand for independent services from both consumers and organizations.

“The growing prevalence of independent work could have tangible economic benefits, such as raising labor-force participation, providing opportunities for the unemployed, or even boosting productivity,” said the study. “Consumers and organizations could benefit from the greater availability of services and improved matching that better fulfills their needs. Digital platforms can amplify all these benefits through their larger scale, faster matches, seamless coordination, and richer information signals, enabling trust.”

Some key challenges, however, must be addressed before this shift can become feasible and satisfying for workers. “Issues such as benefits, income-security measures, and training and credentials offer room for policy makers, as well as innovators and new intermediaries, to provide solutions,” said the study. “Independent workers and traditional jobholders alike will have to become more proactive about managing their careers as digital technologies continue to reshape the world of work.”

A Look Into Who is Driving the Gig Economy
Today’s business environment is vastly different from just five years ago. Success is no longer measured by a company’s longevity or headcount. Today, the business currency is agility and innovation. Technology has forever transformed how work gets done, and the flexible workforce has changed who does it.

Prior to Beecher Reagan, Mr. Thacker managed experienced-hire recruiting at Booz & Company where he led the recruitment of strategy partners and staff across the financial services and consumer, media & digital industry verticals. He also led the scale up of IT, operations and analytics expert capabilities across multiple practices. He began his career as a consultant with Deloitte Consulting, serving Fortune 100 companies focused on IT strategy & efficiency and ERP/CRM systems implementation. Mr. Thacker entered the recruiting and executive search space with Ernst & Young after co-founding a business strategy and services firm.

Mr. Thacker recently sat down with Hunt Scanlon Media to discuss the gig economy and its impact on businesses and the recruiters that partner with them. Following are excerpts from that interview.

John, how has and how will the gig economy affect executive search in the consulting market?

Twenty percent more consultants elect to work independently today than they did just five years ago, creating a larger gap in the ‘middle of the pyramid’ for consulting firms. The short-term impact for consulting firms is the potential loss of project work and revenue to independent workers. Some firms have already begun to address this by building communities of independent workers whom the firms can leverage for project work. However, we feel the long-term impact of the gig economy will be much more significant. If more consultants continue to leave traditional consulting firms, the gap in the middle of the pyramid will manifest into a gap at the partner level, or the top of the pyramid. This will create free agency at the partner level and we expect to see more movement of partners from one consulting firm to another. It will be increasingly important for consulting firms to have trusted executive search partners, who are well networked and educated on the consulting market, to help them navigate this change.

“The gig economy has created opportunities for individual consultants to pursue independent project work, providing them with a more flexible work schedule.”

What steps has the firm taken to prepare for the growing gig economy?

Beecher Reagan is building a new capability to help consulting firms, corporations and private equity firms fill the gaps in their staffing model on an interim basis.

It has been well-documented how the gig economy has affected freelance workers and others. How will it impact partners and senior leaders you place at consulting firms?

The gig economy has created opportunities for individual consultants to pursue independent project work, providing them with a more flexible work schedule. In addition, digital platforms have emerged enabling a virtual marketplace for consultants to select project work without having to source or sell that work. Many more consultants today, particularly in the middle of the pyramid (manager, senior manager equivalents), are electing to work independently. A gap in the middle of the pyramid is not a new phenomenon, but this gap will widen as a result of the gig economy. This will make it very challenging for consulting partners to effectively plan for and efficiently staff their projects.

Is there anything that can be done to help prepare senior leaders for managing temporary or gig talent?

Leaders must understand their employment brand and move from a time and material business to an outcome-based model. This will alleviate the pressure to have the perfect pyramid. Lastly, they should embrace free agency and look to adapt to a world where W-2 employees and contractor labor have more currency. It may seem daunting but if you do the above, you will win.