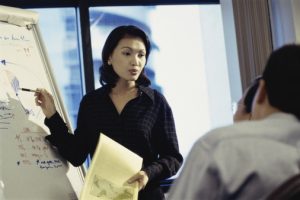 March 27, 2017 – Talent shortages aren’t just a problem in the U.S. Candidate pipelines in Asia are being squeezed as well, and it’s leading women leaders across Asia to feel trapped in regional roles, according to a just-released report by Heidrick & Struggles.

“The firm’s study reminds leaders at headquarters to take notice of Asian women leaders as an untapped resource for global roles, said Steve Mullinjer, the firm’s Asia Pacific regional leader. “As leadership advisors, we recognize the pressing imperatives for companies to hire and promote the brightest and those with high potential in order to stay competitive and outperform others, regardless of their nationalities, age groups, gender and cultural backgrounds.” Senior managers need to embed this kind of “diversity of thinking” into their organizations’ DNA to become more inclusive, he said, which will help to drive better value to their stakeholders.

According to the report, 90 percent of Asian female senior leaders currently in regional roles at multinational companies with headquarters outside Asia aspire to be promoted to global roles. But only 36 percent are ‘somewhat confident’ that they will be granted the opportunity. More than half (54 percent) believe these barriers are a response to their ethnic background, while nearly half (47 percent) feel that their gender is the main obstacle. Meanwhile, a staggering 85 percent are considering leaving their current companies in the next two years.

“Visionary corporations that recognize the increasing importance of Asia to their business are relocating their global headquarters to Asia,” said Karen Choy-Xavier, a Heidrick & Struggles partner in Singapore. “This move by a handful of companies serves as a great opportunity for Asian female leaders to take on global responsibilities without juggling time zone differences or perceptions that they are below average performers just because of the foreign accent they display during midnight conference calls.” But it requires a shift in mentality for headquarters leaders, she noted.

Heidrick & Struggles gathered findings from 138 female senior Asian leaders in the region over an eight month period last year who shared the challenges they encounter and the practices they adopt when taking the leap into a global role. Among the other findings:

“Although there has been a focus on subjects such as women on boards and the development of the local female workforce, the research by Heidrick & Struggles reveals the difficulties of mid- to senior-level Asian female leaders who are limited to regional roles,” said Alain Deniau, a Heidrick partner in Hong Kong. “This is the biggest glass ceiling issue that our successful female leaders are facing in this part of the world.”

To gain greater clarity around issues raised in this study, the global search firm has launched a series of focus group events in Singapore, India, Hong Kong, Japan and China, bringing together groups of female leaders. The insights gathered will be consolidated in a Heidrick & Struggles APAC thought leadership paper to be released later this year.