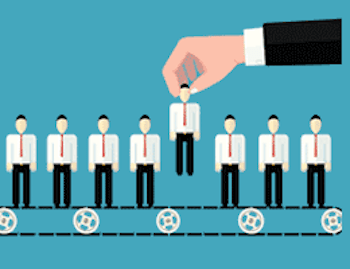 October 18, 2016 – A full quarter of U.S. businesses are experiencing a marked increase in talent raids at the C-suite level. Yet most are woefully unprepared to combat the problem head on. This is among the key findings of a talent retention survey of nearly 400 human resource professionals conducted recently by Marlin Hawk, a global leadership advisory firm focused on next-generation talent, and Greenwich, Conn-based Hunt Scanlon Media.

Specifically, 54 percent of all responding HR experts indicated that their company either has no plan to ward off poachers or, if it does, they’re unaware of it. But of those talent acquisition professionals whose companies had a strategy in place, only 39 percent were satisfied with it.

“What our survey demonstrates is a disconcerting lack of attentiveness on the part of many businesses to what is a growing problem,” said Marlin Hawk chief commercial & innovation officer Mark Oppenheimer. “No organization would let an intruder stroll in uncontested and walk off with its financial assets or intellectual property,” he added. “But when it comes to defending talent, the figurative gates seem to be wide open. It’s a huge mistake that can have an adverse impact on readiness to compete, growth targets, and share price.”

Recent headlines indicate that companies like Goldman Sachs, Netflix, Audi, Fox, and Tesla all have been victimized by a competitor plucking away some of their most talented leaders. Typically, there’s an initial approach, followed by an enticing offer, and then a crucial executive is whisked away. It happens everywhere, in all manner of businesses. 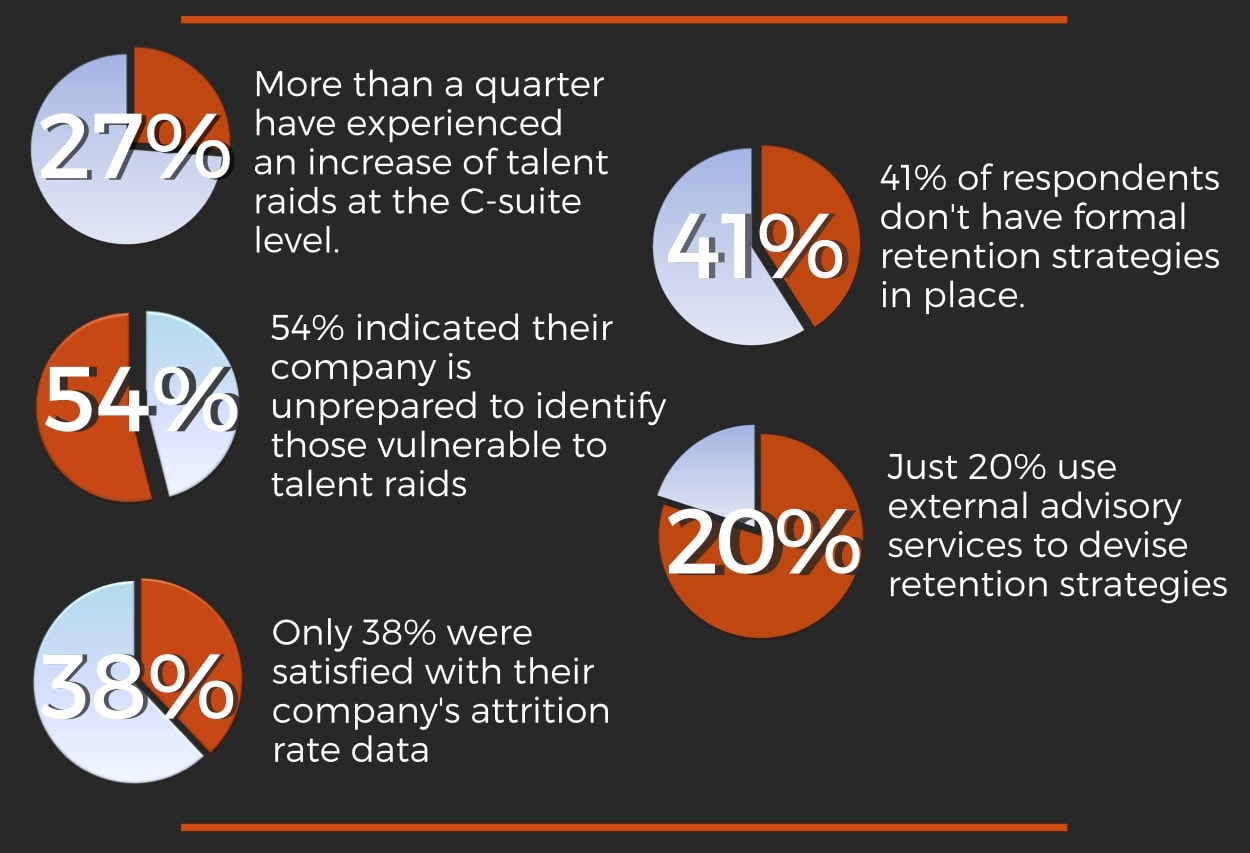 The Marlin Hawk / Hunt Scanlon talent retention survey — which collected information from companies in sectors that include financial services, technology, retail / consumer goods, healthcare, government, and industrial / manufacturing – indicates that just four percent of all respondents believe talents raids have been on the decline during the past two years. Yet, despite this, only 47 percent of those companies whose human resource professionals responded have a definitive plan in place to identify vulnerable talent.

Talent is clearly among the most valuable resources any organization possesses — and when it’s taken away, the loss has serious ramifications. In fact, Mr. Oppenheimer asserts that talent is now the single greatest enabler of business strategy. Yet, when it comes to keeping track of employees’ comings and goings, just 38 percent of respondents indicated they were satisfied with the quality of their company’s data on attrition rates.

“The survey results are particularly significant because of the breadth of our outreach,” said Hunt Scanlon founding chairman and CEO Scott Scanlon, a co-author of the report. “We gathered input from chief human resource officers (CHROs), human resource VPs and managers, as well as executive search consultants and researchers, so the information we collected has the weight of being from the entire HR and search community, rather than from one segment or corner. That makes the findings even more alarming in that so few barriers exist to deter those who would poach crucial talent.”

While the survey’s results speak to a very specific problem at many companies, guidance from Marlin Hawk and Hunt Scanlon suggest that it’s a resolvable one. The answer, quite simply, is to take appropriate steps, without delay.

“It starts with identifying top talent – and taking care to look beyond the obvious,” said Mr. Oppenheimer, who is based in New York. “From there, conduct benchmark studies to ensure your top people are being appropriately compensated, and tie them in with long-term incentive packages. The key is providing them a tangible stake in the organization’s ongoing and future success.”

“Particularly with Millennials, build a team of like-minded individuals with a strong culture and shared values,” said Mr. Scanlon. “Even at the highest levels, people are more inclined to stay when they know their contributions are recognized and appreciated, and they are given an increasing degree of responsibility. It sounds counter-intuitive, but by increasing an executive’s employability elsewhere, you can make them more likely to stay and better equipped to add value.” Millennials, in particular, thrive in connected communities, said Mr. Scanlon. “Create a corporate home base for them. The primary goal is retaining your very best high-potentials, so make your work environment a place that they’d never want to leave.”

Other recommendations are identifying dissatisfied executives who may be more susceptible to poaching, and then taking visible, direct steps to alleviate their concerns, while also providing regular forums for them to express concerns and vent frustrations. Of course, from time to time, key talent will leave. At such times, a robust succession plan – even with a listing of potential replacements and a plan for mentoring – can be invaluable. 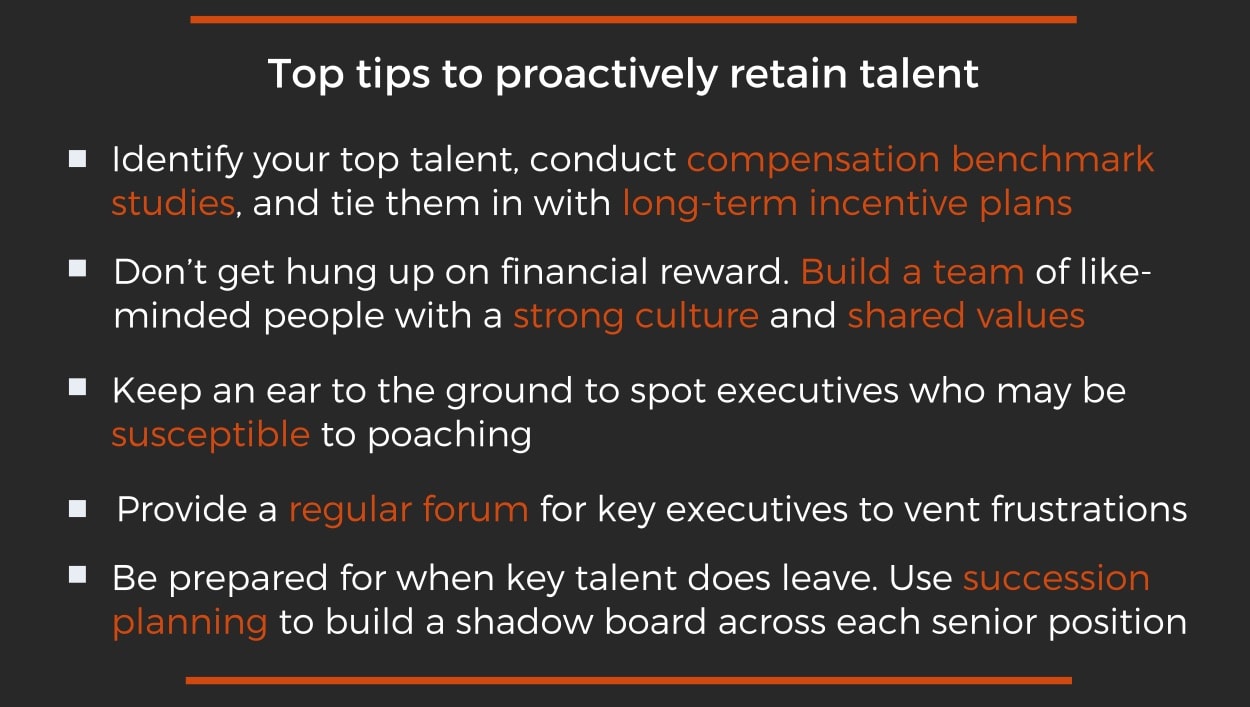 “If someone was a top level talent, you want to let them leave on good terms, and then you want to maintain contact,” said Mr. Scanlon. “After all, they may eventually return, and bring with them additional skills they’ve acquired in the interim. Also, take care to shore up remaining members of the team who are most directly impacted by the departure. Keep them informed, supervised, motivated, and on track – because they are suddenly much more susceptible to poaching.”

Marlin Hawk also strongly recommends that a departing employee be encouraged to be transparent about why they decided to leave. “The last thing you should do is isolate them or treat them as a pariah – that’s a dreadful mistake,” said Mr. Oppenheimer. “Instead, find out their genuine reasons for moving on and then use this vital information as a way to prevent future losses. Occasionally, by showing that you’re truly interested and concerned, you can convince them to stay. I’ve seen it happen.”

The Big Opportunity Ahead

Despite the growing importance of retaining key executive talent, only 14 percent of respondents utilize an external advisory partner to help devise retention strategies.

“That’s a missed opportunity,” said Mr. Scanlon. “There are many innovative advisory firms out there whose expertise in enhancing retention can mitigate the risk of losing top executives to poachers.”

Mr. Scanlon said executive recruiters have been moving away from the simple tasks of identifying talent to higher forms of consulting services, which include leadership assessment, psychological testing, benchmarking, onboarding & integration, culture shaping, and career planning right up through to leadership development and succession planning. “The talent continuum today is very broad-based and senior level recruiters with an eye on the C-suite now view talent management from a much more holistic perspective. That’s the big opportunity ahead for everyone,” he concluded.