Menu
View our Events
Stay Connected:
We’ve all heard it over and over: landing top flight talent is a persistent and growing problem in every industry around the nation. Today, let’s take a look at one sector that is seriously challenged but making great strides to become a field of choice for 21st century workers . . . all through the eyes of recruiting specialist Tom Helbling. 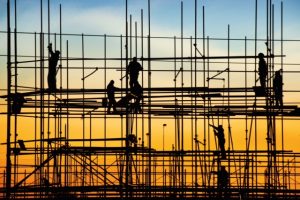 March 1, 2017 – In every industry around the country, one problem persists: landing top flight talent. For the construction sector, the challenge to find the right people is magnified. In its not-so-distant past, building projects were field-driven by tough men in hard hats, and promotion to leadership positions came after one worked his way up through the ranks.

Today, operations in the field are all-around more sophisticated, especially in how top talent is also trained and developed. “Every organization that we have an interaction with is challenged in this area,” said Mr. Thomas J. Helbling, president of search firm Helbling & Associates, a specialist in the field. “Most companies are approaching talent as a top initiative,” particularly in how people are trained and developed. Technology, he said, has played a big part in moving the sector forward. And women might be just as big a part of the senior leadership ranks of these organizations as men.

The shortage of good candidates is a concern, of course, in virtually every sector these days. But for construction, it is coupled with the need to show Millennials and others that the industry’s rough and tumble days are history, and that this is a rewarding field in which to build a career. Young professionals, in particular, tend to be unaware of just how advanced the construction and design industries have become, and that one can make a good living in them, to boot.

For the construction industry, many mid to senior level positions can’t be filled by someone coming up through the trades. Companies that are initiating construction projects are more knowledgeable than ever, and in turn, construction outfits must have employees who have the skills and experiences to meet a client’s needs.

“The contractors have to up their game both from a quality of performance level as well with various support functions,” said Mr. Helbling, whose Wexford, PA-based search firm recruits talent in architecture, engineering and construction as well as facilities management and real estate development.

“The leadership of construction companies has to make sure they have the right people operationally today, which often is very different than what many years ago would have afforded.” They also have to be much more progressive in terms of training and developing their people and in areas of technology.

Depending on the size of the company, having a matrix organizational system that includes positions like chief financial officer, general counsel, director of human resources, and director of health and safety, is increasingly necessary as well. “These types of components are critical today,” said Mr. Helbling. “They help an organization not only run more efficiently but the service that matrix provides is also an added-value component to the clients they represent.”

Coinciding with the internal transformation of the construction industry, societal forces have also been at play. Several recessions and the terrorist attacks of September 11, 2001 took their toll, said Mr. Helbling. So has the rise of the technology industry, which has siphoned off much of the engineering talent that once would have landed in construction and its related fields.

The industry, too, is facing an aging population with insufficient numbers of up-and-coming talent to replace it. Over the years, regulations have brought further change, ushering in new roles and processes, said Thomas Dunn, a senior managing consultant with Helbling. What’s more, enormous construction companies have emerged over the last five or six decades. With them, the conglomerates have brought greater sophistication of technology, process and procedure, and best practices, among other improvements.

A Disadvantage In Attracting Talent

For mid-sized construction companies, in particular, these are challenging days. Many of the sector’s leaders, now in their 50s and 60s, came up in a different kind of construction industry and are increasingly unsuited for the new ways. “Now we have a generation of leadership that’s trying to implement things that are completely different than the world that they grew up in,” Mr. Dunn explained. “You’ve got many executives of that generation, some of who are able to adapt, some who can’t. We see organizations that are still run in a bit of an antiquated fashion and it can impact their ability to compete and perform.”

In many instances, the mid-sized companies, those that do from $50 million to $800 million in business, find themselves lagging behind the $2 billion to $3 billion organizations. “A lot of construction companies in that middle section are privately held, family-owned businesses,” said Mr. Dunn. “The big conglomerates are often held by big foreign entities. They’re massive and they have a totally different dynamic. The privately-held organizations tend to get stuck in their ways for much longer.”

This puts such companies at a disadvantage in terms of costs, efficiency, and attracting talent. “I worked with a $500-million contractor, for which I placed their chief operating officer,” said Mr. Dunn, “and the way they were integrating field staff was the way it was done 20 years ago, versus other companies that are handing you an iPad so you can track a project and do everything electronically. They were still doing it with a pen and paper.”

For search firms, Mr. Dunn said, these challenges demand a lot of collaboration with clients as well as educating them about the state of the market and the talent they can realistically expect to find. But identifying candidates and bringing them into an organization is only part of the battle. It’s crucial for clients to properly integrate those individuals and support them moving forward.

Developing Talent, One Leader at a Time

Hiring talent is challenging enough in any industry because of how limited top flight talent pools have become. And once talent is found and secured, it can continue to be challenging because some of the processes, procedures, and best practices around integrating and developing talent might also be lagging ….. Here’s some further reading from Hunt Scanlon Media.

Leadership Development, Key for Growth, Seen As Stagnating
Leadership development is widely acknowledged as a main driver for business growth, but a large majority of companies are dissatisfied with their organization’s investment in the area. For search firms, leadership consulting is becoming an essential expansion platform where they can make their mark.

Helbing & Associates, which was founded in 1992, has had considerable success navigating these rough waters. Much of its work is in New York and New England; the Southeast; and increasingly California and elsewhere on the West Coast. Although the Midwest is not a primary area, the firm performs searches there as well.

Recently, the firm placed a senior-level officer to manage a $25 billion buildout for Hudson Yards in Manhattan, which is said to be the largest commercial development in North America at the present time. Hudson Yards is mixed-use and includes office, residential, retail and green space.

Also not long ago, the firm secured an individual for a sizable contractor in the mid-Atlantic region, which is owned by a large California private equity firm. The role called for winning new business using a design-build platform, which was new to the firm. That hire has already helped secure a number of high profile projects, largely government sponsored, taking the organization to a new level.

Such searches can be tough, especially given the reduced pool of candidates and the fact that in many instances only individuals from a given area, such as New York City, have the local knowledge and experience to qualify for such roles. Sometimes it comes down to fewer than five to 10 people who could even be considered.

Generally speaking, one way for companies to skirt the talent shortage is to consider candidates from other fields whose skills might transfer well. “Because companies have to be more progressive and forward thinking, they are bringing people in, especially on those matrix and leadership roles, from outside the industry,” said Mr. Helbling. “They’re realizing that they have to look at their business very differently. Hiring people who fit culturally into their organizations and may bring a greater depth of experience can be very beneficial.”

But recruiting someone in a similar role from a competitor isn’t always possible, or desirable. Even if a company succeeds in hiring such an individual, that person might fail to fit into the new culture. “We’re always looking at ways to get creative with talent acquisition,” said Mr. Dunn. New hires can do more than simply fill a role; oftentimes they bring valuable insights, skills, and new ways of approaching problems.

Check Out These Related Articles On 2017 Hiring Trends: