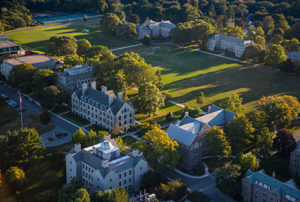 September 18, 2019 – Universities continue to turn to executive search firms to find new athletic directors. Following a competitive national search, Spelman Johnson has placed Maureen White as the next director of athletics and chair of physical education at Connecticut College.

As the first woman to serve as director of athletics at the school, Ms. White will take the helm “at a pivotal moment in the evolution of the athletics program,” the school said in a letter to the campus community.

“We are very fortunate to have found in Mo White a talented leader with the skills, values and experience to take our athletics program to the next level of excellence,” said Katherine Bergeron, president of Connecticut College.

Ms. White joins the school with extensive experience in athletics marketing, consulting and higher education. As an athlete, coach, faculty member and administrator, she has twice before served as a director of athletics, developing highly competitive programs at two institutions. She joined Connecticut College last fall as assistant director of athletics for business operations to lead a review of the school’s athletics operations and to design new approaches for funding the department. Since that time, she has had a transformative effect on athletics, Mr. Bergeron said, noting that one of the goals of the “college’s strategic plan, ‘Building on Strength,’ is to heighten the competitiveness, success and integration of the college’s athletics programs.”

Ms. White previously served as director of athletics and chair of the department of physical education at the U.S. Merchant Marine Academy. During her tenure at the academy, she reorganized the department, developing an inclusive team approach that led to greater equity across programs. Before that, Ms. White served in a variety of roles at Mitchell College, including head men’s tennis coach, assistant professor for business and professional studies, department chair for sport management and physical education, and director of athletics.

“In Mo White, Connecticut College has selected an accomplished and veteran leader,” said Andrea Savage, executive director of the New England Small College Athletic Conference. “She brings a breadth of experience in higher education as a professor, coach and administrator committed to the well-being of student-athletes and to developing programs to achieve success.”

Connecticut College is a member of the NCAA Division III and the New England Small College Athletic Conference (NESCAC).  There are 28 varsity sports programs, 15 for women, 12 for men and a coed sailing team.  Sports for both genders include basketball, cross country, ice hockey, lacrosse, rowing, soccer, squash, swimming, tennis, indoor and outdoor track and field, and water polo.  There are women’s varsity programs in field hockey, sailing and volleyball.

Spelman Johnson is based in Easthampton, MA. Established in 1991, the search firm has helped hundreds of academic institutions identify professionals, pairing leaders with positions across all facets of colleges and universities. Other searches that the firm is conducting include: director of admission at Randolph College, executive director for the National Association for Campus Activities and chief financial officer and corporate secretary for the Georgia Tech Foundation.