Menu
View our Events
Stay Connected:
Honesty is the best policy. Except, perhaps, when it’s not. Gabrielle Parish, of GF Parish Group, says that being selective in the truth one divulges can sometimes be the better choice. 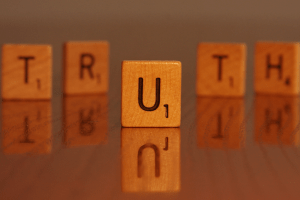 June 28, 2017 – In executive recruitment, as in life itself, individuals from every part of the hiring equation – recruiters, clients, and candidates – sooner or later face the tough question of how truthful they should be under certain circumstances.

Usually, such issues arise when what one wants stands to be road-blocked by an uncomfortable or awkward reality. And though no one is encouraging outright lies or misrepresentation, a certain selectivity is sometimes warranted, said Gabrielle Parish, founder and president of GF Parish Group, which focuses on the investment management industry.

“Honesty is almost always the best policy in all interactions, but there are occasions when the complete truth can be too brutal to impart or unnecessary in terms of detail,” Ms. Parish said in a recent conversation with Hunt Scanlon Media. “In an industry that has a much-needed watchful eye out for charlatans and crooks, all players in the financial business must be as forthright as possible, because it is the ethically correct thing to do and because reputations last forever.”

She points to several instances in which one might legitimately question whether unvarnished and complete truth is called for. Perhaps the most common and significant situation arises when the job-seeker is confronted with explaining the reasons behind a job transition.

“Will an analyst ever say that every security she recommended underperformed?” Ms. Parish asked. “Will a wholesaler ever admit that he couldn’t figure out how to obtain meetings? Will a CEO mention being widely disliked for his authoritarian and pompous ways? No! People may not even be hiding the truth, because so often, they may not even have faced the truth. Nevertheless, to win the trust of the recruiter, it is important to share the challenges that were faced along the way and in situations that didn’t work out, it is critical to avoid constantly pointing the finger at someone else. When every single boss becomes evil in the candidate’s story, the story is likely a fairy tale. When a candidate is completely aware of past difficulties, it is perfectly acceptable to omit details and soften the story – saying, for example: ‘I didn’t agree with management and expressed my opinion too forcefully’ — and it will win the trust of the recruiter.”

Ms. Parish previously established the Minneapolis office for search firm, Warren International, in 1999. She has executed a wide variety of searches in the investment management area, including numerous team lift outs. She came into search after a career in investment management, during which she a senior vice president of American Express Asset Management.

Often, Ms. Parish said, candidates fear they will lose points with a would-be employer for having changed their mind at certain junctions on their career path. They obfuscate when explaining how they went from pursuing a doctorate in electrical engineering, for example, but ended up as a quant analyst. They worry about looking foolish or unable to set goals and achieve them. “That’s an incorrect perception,” said Ms. Parish. “If the candidate shares the thought or emotional process behind the path, she demonstrates the ability to learn from a mistake and change course successfully. That’s what every employer should want.”

Candidates should also be careful to avoid over-spinning their successes. “It may not be wrong to say, ‘I was on the team that took assets under management from $2 billion to $35 billion,’ but if your direct contribution was only a fraction of that amount, or if you were responsible for assembling the books that the salespeople used to win the accounts, that’s more than exaggeration,” said Ms. Parish. “Ultimately, digging and references will highlight the true circumstances, and the candidate will look deceitful without a better rendering of the truth.”

The same holds true when discussing past compensation. “Don’t round up to the nearest million,” said Ms. Parish. “Some employers may ask for proof, and if caught in a lie, you will lose the job opportunity. It’s far better to share the minimum compensation that you would be willing to accept.”

Recruiters, of course, have a responsibility to be forthright as well. Painting an accurate picture of a role, with a focus on the positive aspects of the job and the opportunities for the successful candidate to make an impact, is indisputably essential, said Ms. Parish. But it gets tougher when a candidates views himself as perfect for a position but in reality falls far short. Should a recruiter point out, for example, that someone is not engaging enough to be a salesperson or that their performance hardly matches up with the rest of the talent pool?

“It’s not the recruiter’s place to destroy a candidate’s self-esteem or self-image,” said Ms. Parish. “But it doesn’t hurt to mention that the role has certain hard and fast qualification requirements that don’t match up with the candidate’s background. It’s white lie honesty where complete honesty would be detrimental.”

5 Tips to Consider When Charting Your Career Path
It’s hard to say what makes for a successful career. Nor is there any “right path” to achieving your professional goals. Some routes may be more direct than others, but the ways to get there are innumerable. Phillips DiPisa consultants offer tips to help chart a career path.

Hiring managers must consider the consequences of misrepresentation as well. Sometimes clients fail to disclose everything they should have, and the recruiter as a result presents a less than complete portrayal of the company. “Using examples from our investment management world, perhaps the client neglected to inform the recruiter of recent personnel turnover, internal conflict, uncertainty of strategic direction, nearing of capacity in the stellar product line, a recent downturn in performance, or a host of other unpleasant surprises,” Ms. Parish said. “Or perhaps there were overstatements made that could have been interpreted at just the edge of reality.”

Leaving out such information, for whatever the reason, can cause serious problems: It can delay closing a search by months, if not indefinitely. When the truth comes out, candidates may pull themselves out of consideration and the search might have to begin again with the new information, and with the second slate of candidates, typically not the first choices. To say nothing of the frustration and potential damage to the recruiter’s reputation.

But, as Ms. Parish explained, it can get even worse: “If the truth stays hidden and a candidate accepts a job only to learn the truth later, as an employee, a different set of problems emerges, such as poor job retention by the company, a doubling of fees if the search must be redone after the guarantee period expires, or the need to redo the search for free by the recruiter, if the candidate jumps ship before the guarantee ends.”

Hiring managers and recruiters must come to an understanding of what is the truly happening within a company, department or team, and understand how opinions may differ among the ultimate decision makers. “It is the recruiter’s role to represent any warts as opportunities to make an impact with positive change,” said Ms. Parish. “It is also incumbent upon the recruiter to focus on the positives and to receive permission to be candid. If the company is a public entity, however, and there is news that would not be known to the marketplace, it falls upon the company to hold back that information until it is visible in the public domain. That’s one of the reasons searches sometimes hit the pause button.”

Hiring managers should avoid recruiters who in order to win an assignment fail to ask them the tough questions. “It is completely possible to be politic and to ask if all the decision makers are on the same page, or to ask the hiring manager to identify the greatest challenges facing the role,” said Ms. Parish “The recruiter also needs to be honest about the picture the hiring manager is painting regarding the ideal candidate. Did he describe a unicorn? If all the qualifications and traits exist in one individual, is the price expectation realistic? If the recruiter can’t ask the questions without being negative, once again, go somewhere else.”

Sometimes candidates are being disingenuous when they accept a job. Ms. Parish considers it unforgivable if a candidate intentionally accepts a job in order to use it as leverage to gain a raise at the current employer. “Sure, the candidate will be richer, but he will also be attached to a reputation that will follow him in the industry,” she said. “Do current employers manage to woo back their employees who saw greener grass somewhere else and who were genuinely planning to accept? Yes, that happens, as well, and it is then incumbent on the candidate to offer not only truth, but profuse apologies.”