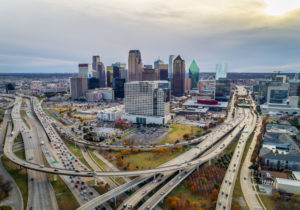 The search firm had been seeking an executive with knowledge of the travel and tourism industry, its distribution channels and its customer base. “Craig stood out among many highly qualified applicants for his strong leadership abilities and extensive destination, hotel and hospitality experience,” said Joyce Williams, chair of the VisitDallas board of directors. “He has an impeccable reputation in the industry and we’re thrilled to bring his expertise to Dallas.”

Mr. Davis has worked in the hospitality industry for more than three decades. He previously served as president and CEO of VisitPITTSBURGH. He began his tenure there in 2000 as executive director of convention sales. He was promoted to vice president of sales and marketing in 2007 and to president and CEO in 2012.

Mr. Davis’ background in the hospitality industry includes executive experience at hotels in Toronto, Chicago and Pittsburgh. While at VisitPITTSBURGH Davis was responsible for overseeing the convention sales and marketing efforts for the new David L. Lawrence Convention Center, the first gold and platinum LEED-certified convention center in the world. Today, he serves as the chair of Destinations International, a professional organization representing destination organizations and convention and visitor bureaus worldwide.

“Dallas is an amazing city and the VisitDallas team is regarded very well nationally,” Mr. Davis said. “I couldn’t be more thrilled to be joining the team of the No. 5 convention city in the nation, the only Texas city in the top 10, and the No. 1 visitor destination in the state. Dallas is a city on the move, and I’m honored to be a part of its future.”

In his new role, Mr. Davis will be responsible for the overall management of Visit Dallas, including budget oversight, strategic direction and implementation, staff supervision, community and government relations, and board governance. He will serve as lead spokesperson for the agency and is a passionate and involved advocate for the convention and tourism industry locally, regionally and nationally.

VisitDallas’ mission is to market Dallas as the ideal convention and visitor destination to the regional, national and international marketplace and to favorably impact the Dallas economy through meetings and tourism.

SearchWide Global is a full-service executive search firm primarily for companies in destination organizations / hotels and resorts / venue management / experiential marketing, tradeshow and exhibition / industry associations / sports and entertainment. Specializing in C-level and director level executive searches for companies ranging in size from Fortune 500 corporations to mid-sized public and private companies and associations. Founded in 1999, SearchWide Global is headquartered in the Twin Cities and operates worldwide.