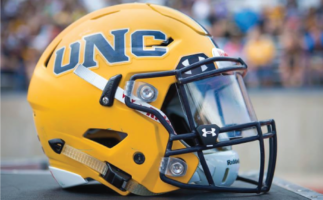 “We are excited to welcome Ed McCaffrey, his wife Lisa and their family to Greeley and the Northern Colorado family,” said Darren Dunn, director of athletics. “There is no doubt that he is going to represent our football program well and lead our team to great success on and off the field. He’s been successful in everything he touches. His competitive spirit and drive are off the charts. He will be great for not only our football program but the university and Greeley and Northern Colorado communities.”

Mr. McCaffrey comes to UNC after being the head coach at Valor Christian High School in Highlands Ranch, CO, for the past two years. A 13-year NFL player, Mr. McCaffrey won three Super Bowls, two with the Denver Broncos and one with the San Francisco 49ers. Before being drafted by the New York Giants in the third round of the 1991 NFL Draft he was a first-team All-American at Stanford University.

“It is a great day for UNC, and the Bear community,” said Dick Monfort, University of Northern Colorado board of trustees chairman. “Ed McCaffrey checks every box, great football mind, proven leader, fierce competitor and an incredible human being. We look forward to Eddie and his family being a part of our Bear Nation.”

“I am excited to be joining the University of Northern Colorado as the head football coach,” said Mr. McCaffrey. “I want to thank president Andy Feinstein and Darren Dunn for the opportunity to be a part of the Bear Family and lead this football program. The University of Northern Colorado has a great reputation for both academics and athletics that attracts a diverse group of talented student athletes. I look forward to immersing myself into the Bears family and coaching young men to be champions on and off the field.”

Earlier this year, College Sports Solutions and Buffkin / Baker formed a partnership with the two firms combining their executive search services to better serve universities and colleges, intercollegiate conferences and collegiate athletic organizations. The two organizations collaborate in all areas of the executive search business at many of the nation’s leading institutions. “The newly formed partnership with College Sports Solutions will further enhance our higher education practice,” said Martin Baker, managing partner and head of the higher education practice at Buffkin / Baker. “Exemplary search relies on the ability to adapt to the changing collegiate landscape and we are thrilled to be collaborating with CSS to ensure continued success in this area.”

Buffkin / Baker has completed more than 550 searches for universities and colleges across the country. The firm recently conducted searches for a number of institutions in the Power Five conferences, as well as leading liberal arts colleges, AAU institutions and regional universities. The firm’s office locations include Nashville, New York, Washington, D.C., and Winston-Salem, NC, with affiliate offices in London. Buffkin/ Baker is a member of Panorama Search, an international federation of retained firms with 18 firms and over 30 offices globally.